The Vi–CELL BLU instrument introduced a new plate reader capability to the Vi–CELL family of cell analyzers. The plate option gives the user the ability to load up to 96 samples or a combination of samples and controls onto the instrument for continuous operation.
﻿

However running so many samples will result in a significantly long run time, approximately 3 hrs total for a full 96 well plate. This may raise some concerns about occupying an instrument for such a long time or viability drift in cells that are not particularly stable outside the incubator environment. To help mitigate these concerns we have equipped the Vi–CELL BLU with an optional FAST Mode of operation which can be used in either plate or carousel configuration to significantly reduce sample to sample operation times.


The FAST Mode shortens the wash cycle duration saving approximately 30% on sample run time. The tradeoff is a potential increased risk of carry over between samples since the washing is less thorough than normal mode. This tradeoff may be acceptable depending on sample type and desired run time. Please note also that prolonged use of Fast Mode may result in increased build–up of trypan blue and proteinaceous material in the fluidics path of the instrument, so regular decontamination runs are recommended.

Wash mode is a configurable option during sample logging or set as the default in the Run Setting preferences screen. It can either be chosen in the sample setup bar which would allow multiple samples to be logged using the same settings, or it can be changed once the sample is in the queue list. For more instructions please consult the user manual. 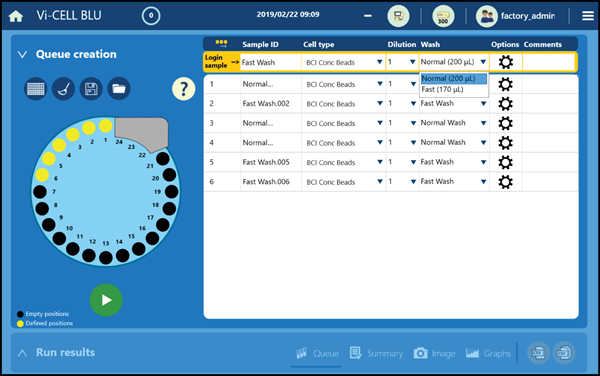 The basic scheme for assessing carryover is to alternate a cell or bead sample with blank buffer samples, in either a plate or carousel and to run either in Normal or Fast Wash mode. An example of such a run is shown below.

L5 size standard beads (6602794 lot 9012057F) were used as a general control due to their nominal size and approximate particle density of ~4 x 106 beads/mL. The instrument was run using a cell profile set up for L5 beads based on the default L10 bead profile.

CHO cells are a standard cell type that was used to determine carryover when using a biological sample. Absolute concentration was approximately 3 x 106 cells/mL but this is not a critical parameter as the main investigation is the relative number of cells between the normal and blank samples. Cells were analyzed using standard Mammalian cell type profile.

Particle concentration was not critical here but was used an indicator of expected performance. Particle counts between sample and blank were recorded. Residual carry over was determined by the number of beads appearing in the blank samples. Random analysis of captured images was also conducted to verify particles scored in blanks were bead and not some other debris.

Blank samples have highly variable count numbers as expected when running a sample with no particles. This causes some issues with the internal calculations so average particle counts are the most consistent parameter to use.

A T–test analysis between normal and fast wash residual bead counts in the blank samples gives a p value of 0.986 indicating no statistical difference between operation modes in terms of carry over between samples. It is therefore possible operate the instrument in either mode and have confidence that the sample to sample carryover will be negligible. It should be noted that the degree of variability in the blank samples can be extremely high due to so few particles being counted but in all test cases the percentage carry over was always well below 1%.