Metal colloids are metal nanoparticles, and are widely used in ink jet wiring technology, catalysts, and life science applications. Metal colloid nanoparticles are primarily synthesized using atomization or chemical reduction, and when using these methods, impurities or agglomerates may be present. In the experiment this time, we will introduce a method to purify and concentrate a synthesized metal colloid using ultracentrifugation. 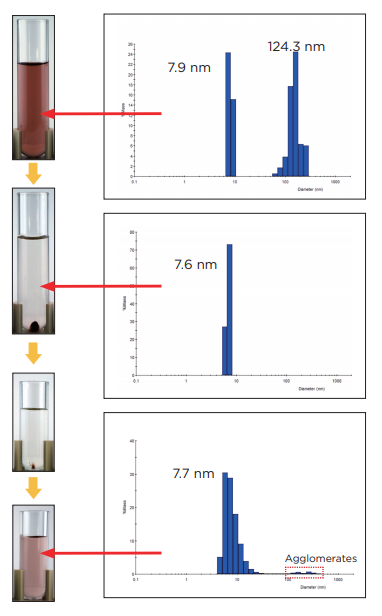 Sample prior to centrifugation

Silver colloid particles prior to centrifugation There is a particle diameter distribution with impurities and agglomerates present.

After centrifugation at 500,000 xg / 30 min, the supernatant was collected and the particle diameter was measured. Based on these results, it is believed that the primary particles are the colloid particles suspended within the solution. The impurities and agglomerates precipitated to the bottom of the tube, forming a deposit.