Gold nanoparticles have started to garner attention over the past ten years or so in the field of biomedical science, and particularly in tumor imaging 1, photothermal cancer therapy 2, 3, and metal-enhanced fluorescence. 4 These applications require high-quality gold nanoparticles that are a monodispersion with a uniform size and aspect ratio. In these Application Notes, we will introduce a method to purify a gold nanorod monodispersion from a polydispersion sample using the density gradient centrifugation method with the Avanti JXN-30, which boasts high speeds even amongst high-speed refrigerated centrifuges.

Gold nanorods (hereinafter to be abbreviated as AuNR) play an important role in biomedical imaging. AuNR shows extremely strong absorption in the visible light and near-infrared regions as a result of plasmon effects, and it is known that the aspect ratio of AuNR will directly impact the peaks in this absorption wavelength. Therefore, in biomedical imaging, the optical purity of gold nanorods is important as is the physical purity. However, normally, in the AuNR synthesis process, there will be synthesis of gold nanoparticles (gold nanospheres, hereinafter AuNS) with a round shape that failed to become elongated, or of AuNR with an aspect ratio is that slightly different and therefore, less than ideal, as impurities. AuNR and AuNS are the same size, with the same constituent components and the same surface coating (the surfactant CTAB in the majority of cases), so separating them is a major issue. While these nanoparticles have the same sort of size, the density will differ because of slight differences in the surface area / volume ratio. In order to separate nanoparticles with these types of characteristics, density gradient centrifugation can achieve high separative power. In this Application Note, we used two types of AuNR preparation samples. The first sample was AuNR with an aspect ratio of 4.1 (10 nm x 41 nm) and an absorption wavelength of 808 nm, while the second sample was AuNR with an aspect ratio of 2.4 (25 nm x 60 nm) and an absorption wavelength of 650 nm. The two samples were mixed and Avanti JXN30 and a swing rotor (JS-24.15) were used to perform separation via a single density gradient centrifugation operation. The separated AuNR sample was analyzed using a spectrophotometer, and it showed a degree of purification that was the same as that of the original sample.

In order to prepare the samples for the density gradient centrifugation using the 10 nm diameter AuNR (absorption wavelength peak at 808 nm, hereinafter to be denoted as AuNR 10 nm) and the diameter 25 nm AuNR (650 nm, hereinafter to be denoted as AuNR 25 nm), 3 mL of each sample was centrifuged using Microfuge 16 (Beckman Coulter) at 10,000 xg for 5 minutes, and the resultant pellets were re-suspended in 0.05 mL of an aqueous 0.01M CTAB solution for concentration. The density gradient was prepared manually as shown in the following table within a 15 mL polyallomer (PA) tube (Serial No. 361707, 31,000 JPY). 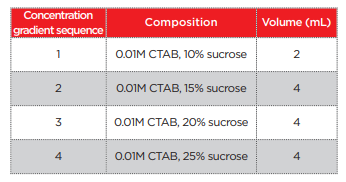 The two concentrated AuNR samples were subjected to ultrasonic processing for 5 minutes (Branson M1800 sonicator), and then the samples were mixed, overlaying the material on top of the density gradient that had been prepared. These samples were centrifuged using the high-speed refrigerated centrifuge Avanti JXN-30 and a swing rotor (JS-24.15) (Beckman Coulter) at 25℃ and 10,750 xg for 15 minutes. Three acceleration and deceleration configurations were established. After centrifugation, the material was divided into 300 µL fractions. The absorbance of each fraction was measured using a microplate reader, and the fractions having peaks at 808 nm or 650 nm were collected. For solvent displacement, each of the fractions that had been collected was centrifuged using Microfuge 16 at 10,000 xg for 5 minutes in order to form pellets of the AuNR, and this material was resuspended in 0.01M CTAB. This step was repeated three times, the pellets were washed, and in the end, the material was suspended in 250 µL of 0.01M CTAB. A spectrophotometer (DU 800, Beckman Coulter) was used to measure the absorption spectrum for the preparation, the mixed sample, and the sample following purification. 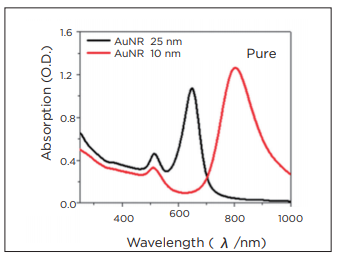 Fig. 1a Absorption spectrum for the AuNR 25 nm and AuNR 10 nm preparations 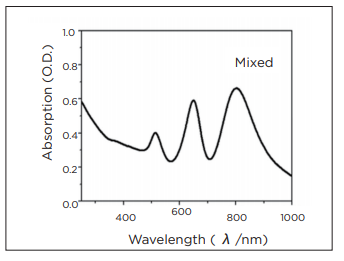 Fig. 1b Absorption spectrum of the sample containing a mixture of AuNR 25 nm and 10 nm 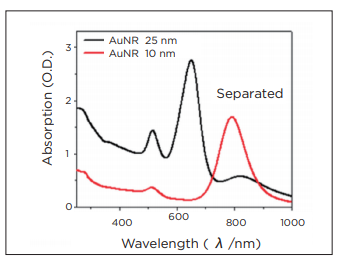 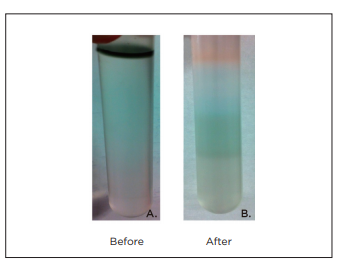 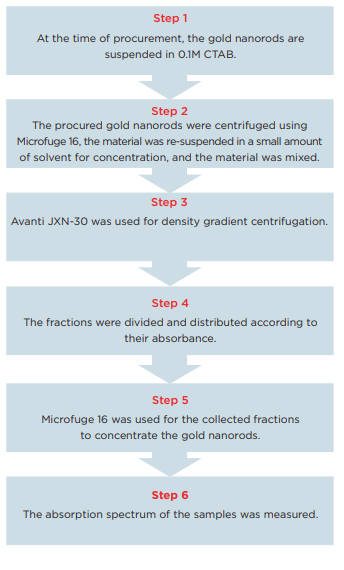