Printer inks include pigment inks and dye inks, and printing can be performed by taking advantage of the merits of each of these types of inks. The dyes of dye inks are present in a state in which they are dissolved in a solvent, so they will soak into paper to produce the color.

On the other hand, pigment inks will adhere to the surface of the paper to produce color, so small particles are dispersed within the solvent.

Therefore, it goes without saying that it is necessary to have technology to ensure uniform dispersion of the pigment. In the experiment this time, we attempted to accurately measure the particle diameter of not only the magenta (red) pigment ink, but also of the stabilizers other than the pigment.

Sample prior to centrifugation

Measurement of the particle diameter using a MLA-150 rotor for centrifugation at 150,000 rpm (1,003,000 xg) for 0.5 hr, and then using a DelsaMax Pro to measure the supernatant using dynamic light scattering 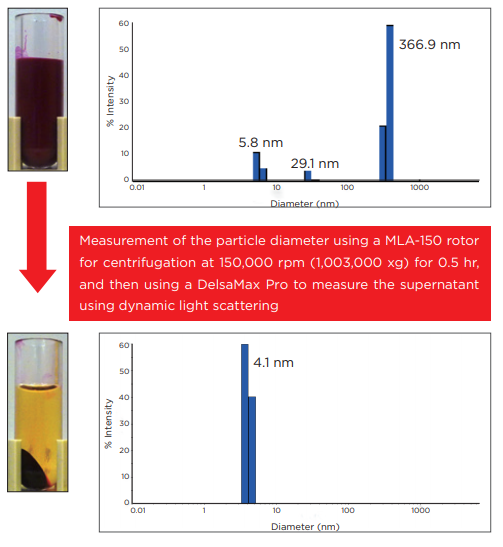 This could be due to the fact that there is a tendency to approach the measurement value for the larger particles (366.9 nm).