A revised version of the USP chapter on Total Organic Carbon (TOC) USP<643> will become official on May 1, 2021. This paper gives an overview and discusses the difference in the System Suitability Test materials called for in USP<643> and those in the Japanese Pharmacopoeia.

Total Organic Carbon (TOC) is one of the four critical quality parameters defined by the pharmacopoeias for bulk Purified Water (PW), Water for Injection (WFI), Water for Haemodialysis, Pure Steam Condensate, plus Packaged Sterile Water. The others are Conductivity, Microbial Colony Forming Units and Endotoxins. USP<643> points out that TOC is an indirect measurement of organic contamination and that, whilst TOC can be a food for microbes encouraging their proliferation in water systems, there is no direct numerical correlation between TOC levels in a water system and microbial contamination. It goes on to state that TOC can be introduced into a bulk water system from the source water, from the purification and distributions systems and from biofilm growing in the system. For packaged sterile water an additional source of TOC can be the packaging itself.

USP<643> states that TOC is a Limit Test, i.e. the levels of TOC in a sample must not exceed the defined Limit, which is the response of the TOC analyzer to a 500ppbC standard made from USP-traceable sucrose. In other words, whatever TOC result the analyzer gives in response to testing the USP-traceable 500ppbC Sucrose becomes the maximum Limit of TOC allowable in the water system, so the Limit may not be a reported result of 500ppb TOC. Users should be aware of this and ensure that the measured TOC levels in their water does not exceed the Limit reported by their TOC analyzer when analyzing the 500ppbC USP-traceable Sucrose standard. As an example, if the reported TOC result from their TOC analyzer in response to analyzing the 500ppbC Sucrose is a TOC result of 450ppb, then a reported TOC result from a water sample of 450ppb becomes the maximum allowable level of TOC for their water samples. 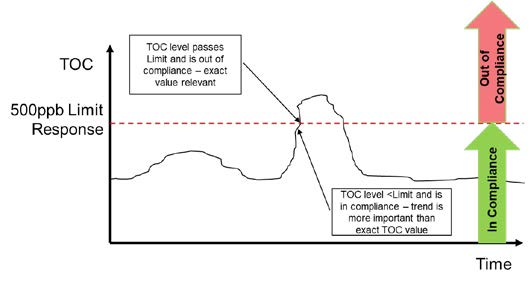 It is worth noting that different organic materials contain differing amounts of carbon. For example, a sucrose molecule contains 12 carbon atoms. So, the results of a TOC analysis does not identify the organic substance, it just identifies that there is carbon derived from organic material present. However, for Packaged Sterile Water, this chapter has been changed and under certain circumstances the user is required to identify each organic compound present in the Water Sample under test. This is explained further in the section on Packaged Sterile Waters later in this paper.

USP<643> does not mandate the measurement technology that should be used to measure TOC, just that whatever is used should have a manufacturer’s specified limit of detection of 0.05mg/L (equivalent to 0.05ppm, or 50ppb) and that it should pass the test for suitability, the System Suitability Test. USP<643> states that the analyzer should measure the TOC by oxidizing the organic molecules to produce carbon dioxide and then measure the carbon dioxide from the TOC to calculate the amount of TOC present in the sample. It does not mandate on-line or off-line instruments. It goes on to state that any technology used to measure TOC in water must be capable of discriminating between the TOC and the inorganic carbon that may be present in the sample (TIC), such as dissolved carbon dioxide that is already present in the sample or bicarbonate. This can be achieved either by purging the TIC from the sample before oxidizing the organics, or by measuring the TIC in the sample and then subtracting that from the final total carbon measurement made after the organics have been oxidized to carbon dioxide (TC).

Fig. 3: Some instruments measure TIC and TC and calculate TOC

When the TOC test was introduced to the USP in 1998, it replaced several other tests and the challenge was to ensure that instruments used for TOC analysis would be suitable for analyzing the range of organic compounds expected to be found in pharmaceutical grade waters. The System Suitability Test (SST) was introduced as a method to verify that a TOC analyzer could analyze with equal efficiency a solution containing the relatively easy to oxidize substance sucrose as well as a solution containing the longer-chain and more difficult to oxidize substance benzoquinone. Both solutions must contain 500ppb carbon. A TOC analyzer must analyze both 500ppbC solutions equally well and produce TOC results from both that are within +/-15% of each other.

As stated earlier, the TOC test is a Limit test, with a maximum allowable level in bulk pharmaceutical-grade waters of 500ppbC. Whatever TOC result the analyzer gives in response to testing the USP-traceable 500ppbC Sucrose solutions becomes the maximum Limit of TOC allowable in the water system, so the Limit may not be a reported result of 500ppb TOC. Users should be aware of this and ensure that the measured TOC levels in their water does not exceed the Limit response reported by their TOC analyzer when analyzing the 500ppbC USP-traceable Sucrose standard.

USP<643> recognizes that packaged sterile water may contain higher levels of TOC introduced primarily from the packaging the water is in. These sterile waters are derived from PW or WFI, so they will already have been tested and must be compliant with the 500ppbC Limit test defined for bulk waters. The level of TOC in Sterile Waters is not as critical as it is for Bulk Water, where it can provide a food source for microbes. For Sterile Water the final sterilization step is carried out once the water is inside the package, thus sterilizing any microbes that may be present in the water and preventing them from proliferating.

This section is where the substantive changes to USP<643> have occurred. In addition to passing the system suitability test with the same +/-15% limit, it now allows for different concentrations of TOC depending on the container size for the packaged water, called L1 and, as long as the water sample being tested contains less TOC than L1, it is deemed to have passed and the test is complete. If the reported TOC value from a water sample is higher than L1, but lower than a second, higher Limit, L2, the user is required to determine exactly what organic compounds are present in the water using suitable analytical procedures. If the quantity of every organic compound present measured individually is ≤0.2mg/L (≤0.2ppm or ≤200ppb) then they are deemed not to be present in a quantity that may be harmful to patient safety. If however any individual organic compound is found to be present in quantities >0.2mg/L then they must be evaluated for their impact on patient safety at the reported concentration. If there is no impact on patient safety, then the water sample meets the requirements and the test is complete. If however, any organic compounds are identified as potentially harmful and are present in sufficient concentration to impact patient safety, then the water sample does not pass the test. Additionally, if the TOC analysis from the water sample shows that the level is higher than the second Limit, L2, then the sample dose not pass the test and there is no requirement to identify and quantify individual organic compounds (unless the user requires to do this as part of their root cause investigation).

The nominal container volumes considered in this section are ≤5mL, >5mL and ≤100mL and >100mL. The Limit 1 and Limit 2 levels are defined in the table in Fig. 4 below.

Differences between JP and USP

Unlike the USP<643> chapter which is primarily aimed at pharmaceutical waters, the JP chapter on TOC is more general and includes reference to TOC analyzers that are used for cleaning validation too. As the organic compounds found in cleaning rinse waters may be more complex and difficult to oxidize molecules than those expected in pharmaceutical waters, the JP chapter on TOC calls for the TOC analyzer to be challenged with a solution of the ionic surfactant Sodium Dodecyl Benzine Sulfonate (SDBS).

Fig. 5: The JP chapter on TOC requires TOC analyzers to be challenged with SDBS

Similar to the test for sub-visible particle contamination in parenteral drugs, USP<788>, where for small volume containers the pass/fail criteria is based on the total number of particles per container, the change to the tests for Packaged Sterile Water in USP<643> is suggesting that the total amount of organic carbon per container is also a measure of patient safety, not just keeping TOC levels below a set concentration. It is also asking users to do further testing when certain levels of TOC are breeched to identify each organic compound in the water to better understand the risk to patients. This is a significant change that will hopefully bring improved confidence that Sterile Packaged Water is safe for human use. 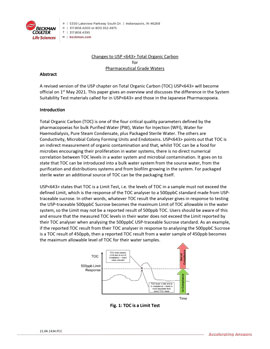