Early assessment of ADMET (Absorption, Distribution, Metabolism, Excretion and Toxicity) properties plays a critical role in the optimization and prediction of pharmacokinetic behaviors of new chemical entities. Among the most important ADME assays is the in vitro drug metabolic stability assay. This assay evaluates the susceptibility of compounds to biotransformation or intrinsic clearance. Because an increasing number of compounds require metabolic stability evaluation, a high-throughput and cost-effective method is desirable during early drug discovery. In this application note, we discuss how the Echo Liquid Handler provides a platform for conducting a miniaturized high-throughput metabolic stability assay. The Echo Liquid Handler precisely and accurately transfers nanoliter volumes with acoustic energy in a completely contact-free manner. Thus high quality data can be obtained with a small fraction of the volume required by tip-based liquid handling methods.

The metabolic stability assay was performed by incubating pooled Human Liver Microsomes (HLM) and test compounds in potassium phosphate buffer in the presence of the cofactor NADPH at 37°C. Reaction mixtures (5 μL) contained a final concentration of 1 μM test compound, 0.05% DMSO, 0.5 mg/mL HLM and 1 mM NADPH in 100 mM potassium phosphate buffer at pH 7.4. Reactions were terminated by addition of 70 μL acetonitrile after 0, 5, 10, 15, 30 and 60 minute incubations. Bucetin was added to the quench solution as an internal standard. Test compound disappearance was measured and compared to the zero time point using mass spectrometry.

Compounds were weighed out and dissolved in DMSO to make 2 mM stock solutions. 100 mM potassium phosphate buffer (pH 7.4) was made by combining potassium phosphate monobasic solution and potassium phosphate dibasic solution. 1 mM NADPH was made in the potassium phosphate buffer and kept in a 37°C water bath. Pooled HLM was diluted in the warm NADPH buffer to make 0.5 mg/mL stock. 60 μL HLM at 0.5 mg/mL was transferred into one column of a 384-well Echo Qualified Microplate and 20 μL compounds at 2 mM were transferred into another column in the same microplate. Echo Plate Reformat software was used with the Echo 525 Liquid Handler to transfer 5 μL HLM into six (one for each time point) 384-well destination microplates. Echo Plate Reformat software was then used with the Echo 555 Liquid Handler to transfer 2.5 nL compound into the six 384-well destination plates already containing HLM. The destination microplates were then incubated for 5, 10, 15, 30 and 60 minutes in a 37°C water bath. At the end of each incubation, using a bulk filler, 70 μL cold acetonitrile with bucetin as internal standard was added to each 384-well microplate to terminate the reactions. For the zero time point, the destination microplate plate was quenched with acetonitrile immediately after addition of compound. Quenched samples were cooled to 4°C and centrifuged at 2500xg for 15 minutes. The assay microplates were then used directly for sample injection into the API 4000 mass spectrometer. Compound disappearance was monitored using the multiple reaction monitoring (MRM) mode. 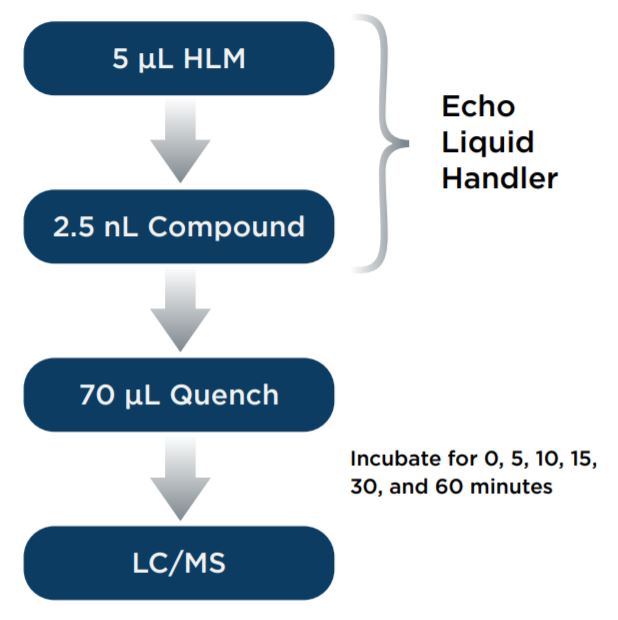 Half-life and intrinsic clearance values of four test compounds chlorpromazine, diclofenac, propranolol, verapamil and were determined using the miniaturized assay procedures described. To calculate in vitro T½, analyte/internal standard peak height ratios were. converted to percentage drug remaining by normalizing the data to T=0. Then, using a linear regression of log percentage compound remaining versus incubation time, a slope, -K was computed. The half life is T½= 0.693/K. Figure 2 shows slope determination of the four test compounds. The intrinsic clearance value (CLint) for each compound was then determined by: 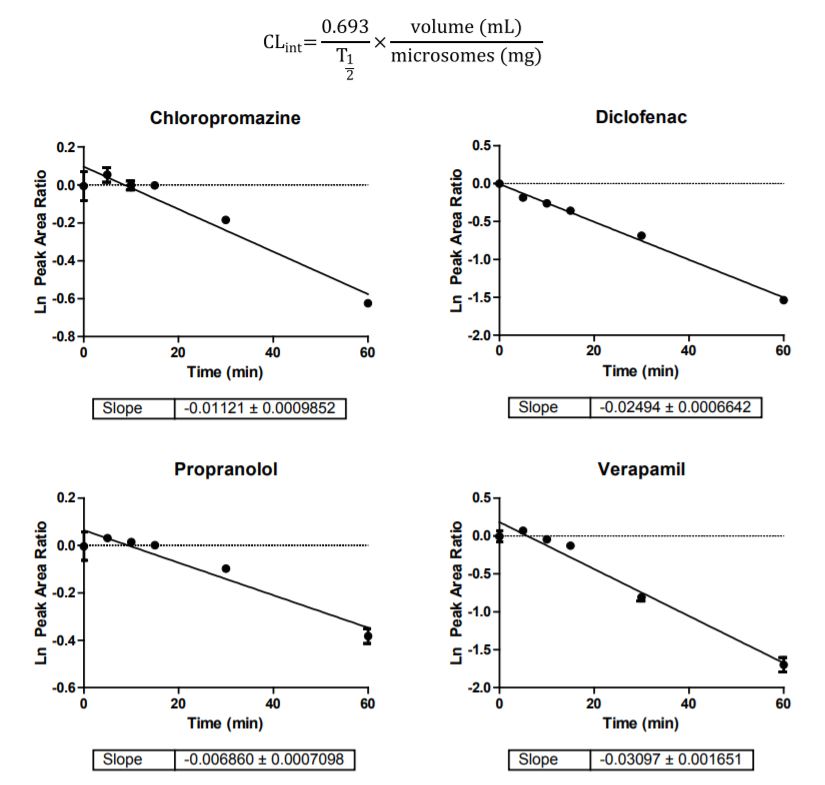 * Intrinsic clearance value for chlorpromazine was converted to mL/min/kg for a better comparison with literature value.

Metabolic stability studies are an important component of ADMET studies in the early lead optimization process, providing a rapid understanding of in vitro metabolic pathways and an indication of potential drugdrug interactions. Conventional assays use larger reaction volumes, which increase the cost of large scale screening. With the Echo Liquid Handlers, reaction volumes for metabolic stability assay can require as few as 2.5 nL of compound and 5 μL human liver microsomes per reaction—a significant reagent savings. Half-life and intrinsic clearance rates obtained in this study agree well with conventional procedures that use larger reaction volumes. With the Echo Liquid Handlers, scientists can evaluate pharmacokinetics parameters in a reliable, rapid and cost-effective manner.