M. Rosenbaum and I. Schlembach from the BioPilot Plant of the Leibniz Institute for Natural Product Research and Infection Biology - Hans Knoell Institute (HKI Jena, Germany)

Filamentous fungi play an important role in the industrial biotechnology. They are attractive candidates for the production of organic acids, enzymes as well as secondary metabolites. Aspergillus niger for example is used for the citric acid production and for the production of amylases, catalases and proteases. In general, 38 % of all known bioactive metabolites originate from filamentous fungi [1,2] . One of the most important industrial producers for cellulases and hemicellulases is Trichoderma reesei (T. reesei). It has a high protein secreting capacity for cellulases up to 100 g per liter while it grows on inexpensive lignocellulosic materials [3,4] . Furthermore, it is used as model organism for plant biomass degradation.

Classically, T. reesei is cultivated in shake flasks with only limited experimental throughput. High throughput cultivation of filamentous fungi in microtiter plates has been proven difficult due to their morphologic complexity. Depending on the hydromechanical stress and various other factors, mycelia can either grow freely dispersed or form macroscopic aggregates from mycelial clumps to pellets. Thereby, morphology has great impact on productivity, growth kinetics and physical properties of the fermentation broth. Dispersed mycelium enables a homogenous supply of nutrients to the culture but tremendously increases the viscosity of the broth, impeding efficient aeration. In contrast, pellets cause a lower viscosity but lead to inhomogeneous supply of nutrients with well supplied pellet periphery and starving pellet cores [5,6] . Consequently, suitable morphology has to be identified for each strain and process individually [7] . Since the hydromechanical stress is typically low in small scale systems compared to shake flasks and large stirred tank fermenters, the morphology in these different cultivation systems can often differ significantly. For scale-down of filamentous cultures, it is therefore important to adjust the cultivation parameters not only based on classical bioprocess scaling variables like the gas transfer coefficient kLa or volumetric power input, but also based on morphology. For microtiter plates this can be mainly achieved by variation of the shaking speed, well diameter and introduction of baffles (e.g. flower-plate design). For extremely viscous cultures it is further necessary to increase the shaking diameter to prevent out of phase phenomena that will impede aeration. For cultures that are preferentially grown as dispersed mycelium like T. reesei but are prone to cell damage introduced by baffle, the 48- RoundWellPlate in combination with a high shaking speed offers a sufficiently large well diameter that causes enough shear stress to prevent clump formation while maintaining a high throughput.

In this application note we show, that the BioLector® system is suitable for high throughput fermentation of T. reesei while maintaining essentially the same morphology, cellulase production and growth kinetics as in conventional shake flask fermentations. Furthermore, we demonstrate different application examples that take advantage of the optical online measurement capabilities of the BioLector®. These examples include a reporter-based estimation of cellulase induction and online measurement of growth rates. This application note was realized in cooperation with M. Rosenbaum and I. Schlembach from the BioPilot Plant of the Leibniz Institute for Natural Product Research and Infection Biology - Hans Knoell Institute (HKI Jena, Germany).

For Application example C, (NH4)2SO4, KH2PO4 and peptone concentration were varied and the medium was buffered to pH 6.7 with 0.1 M 2-(N-morpholino) ethanesulfonic acid (MES) instead of PIPPS buffer.

The main solution without trace elements and carbon source was always prepared as a 2× concentrated stock solution that was set to pH 5.5 with 5 M NaOH. The solution was filtered through a 0.2 µm filter for sterilization. Before the experiment, the 2× concentrate was diluted to its original concentration by addition of sterile bidest water and other supplementing solutions such as trace elements, carbon sources or spore inoculum.

Inoculum: All cultures were inoculated from aqueous stock spore suspensions to a final concentration of 106 spores/mL.

Sampling procedure: For sampling, the BioLector® cultivation was shortly interrupted and a whole well was harvested. Then, the measurement was quickly resumed.

Construction of the T. reesei RUT-C30 strain RFP1: The red fluorescent protein (RFP) tagged strain of T. reesei Rut-C30 (RFP1) was transformed with an expression cassette consisting of a shortened version of the chb1 promotor, an engineered fast folding variant of Discosoma RFP and the cbh2 terminator.

Cellulase enzyme assay: The cellulase activity in the culture supernatant was measured by the standard filter paper activity (FPA) assay according to the method of Ghose [9] adapted by Xiao [10] . The assay was performed in 60 µL reaction volume in 96-well conical bottom PCR plates.

µ-slide angiogenesis). A z-stack was recorded over 72 µm depth above the bottom of the microscope chamber. Then, a maximum projection of the zstack was calculated using the image calculator tool FIJI to extend the depth of field. 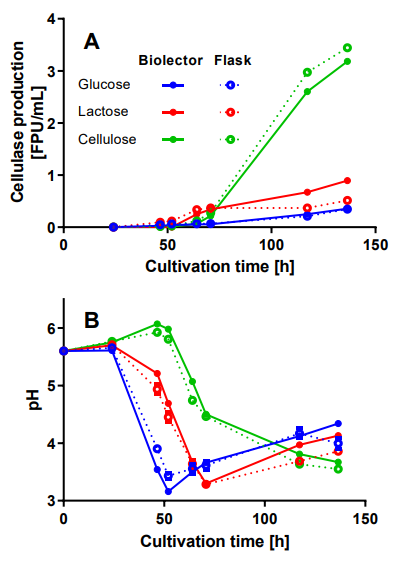 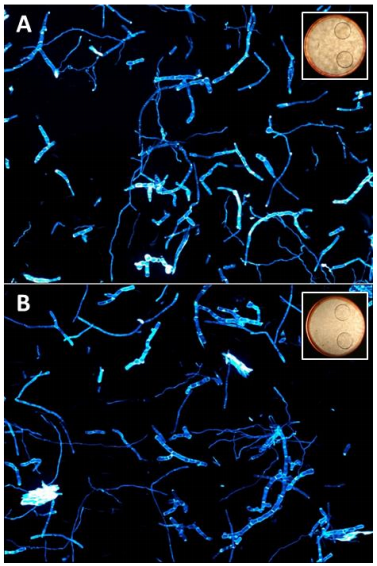 Figure 2: Comparison of micro and macro morphology of T. reesei RUT-C30 RFP1 cultures grown on 30 g/L cellulose in (A) 250 mL flasks or (B) a BioLector® a 48 RoundWellPlate. Microscope pictures show calcofluor stained mycelium, the inset shows a macro photograph of a 1/16 dilution of the respective culture broth in a BioLector® well. Both cultures grew as homogeneous dispersed mycelium with a mixture of thin and thick hyphae at microscopic level.

Application Example A: Estimation of cellulase induction by online fluorescence measurement using a CBH1 promoter-based RFP reporter construct: To demonstrate the usefulness of the online fluorescence monitoring capabilities of the BioLector® in the context of cellulase production screening, the used T. reesei RUT-C30 strain was transformed with a reporter construct driving RFP expression under the control of a shortened version of the CBH1 cellulase promotor. The shortened version of the promotor results in weak constitutive RFP expression, that is increased under cellulase inducing conditions [12] . Figure 3 shows the corresponding online profiles of the RFP measurements for the BioLector® cultivations shown in figure 1. The RFP signal increased with increasing induction capability of the used carbon source and hence correlated with the cellulase production as evaluated by the filter paper assay. Such reporter strains of T. reesei can therefore be suitable to screen other carbon sources for their cellulase induction capability at high throughput in the BioLector®. 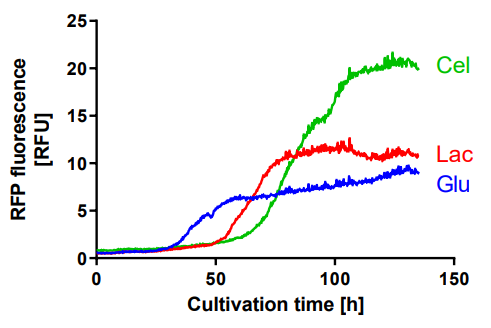 The scattered light signal of the BioLector® can be used as an online approximation for biomass growth (see figure 4), which in turn can be used to calculate growth rates. The growth rate of T. reesei was compared at two different pH values. Thereby, it was shown that T. reesei achieves a higher µmax at pH 4,8 than at pH 7 as shown in figure 5. The determined values are in agreement with growth rate trends determined by other authors. [13] 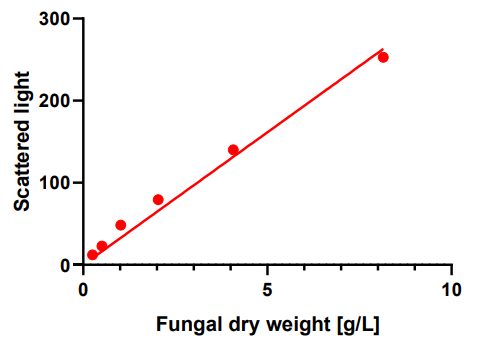 Figure 4: Calibration of cell dry weight and scattered light for T. reesei RUT-C30 RFP1 grown on PIPPS buffered medium containing 30 g/L cellulose. The culture was harvested after 120h of cultivation, when cellulose was consumed. Dry weight values for the different dilutions are derived from a triplicate measurement of the undiluted culture. Scattered light values show means of three sequential measurements. 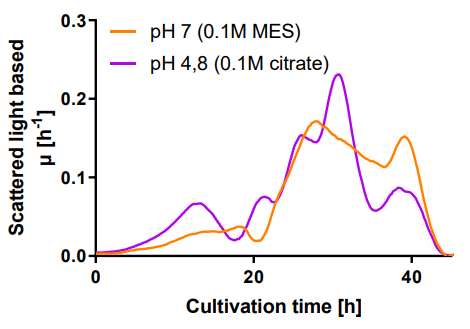 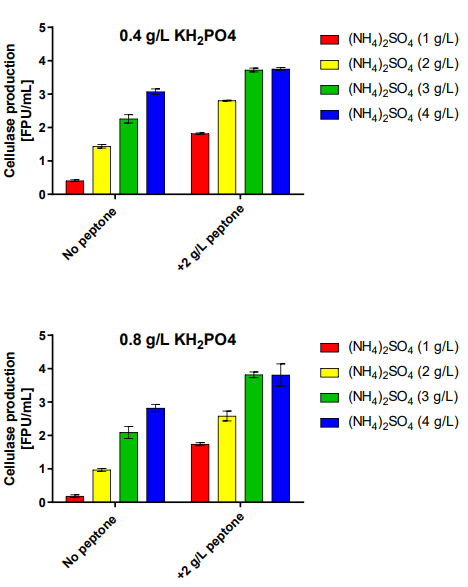 This application note demonstrates various application examples for fungal cultivation processes in the BioLector®. We show that the BioLector® is a suitable screening device for filamentous fungi and we can validate the comparability between BioLector® and shake flask cultivations. The BioLector® is a reliable cultivation device for online reporter protein screening in high-throughput using non-invasive fluorescence measurements. We also validate the highthroughput and reproducibility by media optimization for increased cellulase production in T. reesei.

We thank Leibniz Institute for Natural Product Research and Infection Biology, Hans Knoell Institute (HKI) for the realization of the collaboration with m2p-labs.Special thanks go to Prof. Dr. Miriam Agler-Rosenbaum, Ana Barrera, Dennis Carpentier and Ivan Schlembach for sharing experimental data with m2p-labs.