In general, the PI staining is implemented to evaluate the cell viability of bacterial cultures from food products, clinical samples, environmental or fermentation processes or to characterize eukaryotic cells.1 In microbiological studies, bacterial viability tests are a crucial analyzation tool, widely used for the evaluation of antimicrobial properties as in high throughput cytotoxicity screenings or in toxicity tests often performed with premixed, ready for use staining kits based on detection of membrane integrity. Propidium iodide is a versatile dye, most commonly used for identifying dead cells in a population and as counterstain in multicolor fluorescent techniques. It is supposed to penetrate only dead cells with disrupted cell membranes and is generally excluded from viable cells with intact cell membranes and thus cannot be penetrated by staining compounds.2

Via intercalating with cellular deoxyribonucleic acid (DNA) PI is emitting red fluorescence. 1 It binds to DNA between the bases with little or no sequence preference with one dye molecule per four to five base pairs, similar to ethidium bromide. In aqueous solution, the dye excitation/emission maxima of the dye are 493 / 636 nm. 3 Once the dye is bound, the fluorescence excitation maximum is shifted around 30-40 nm to the red wave length range. The fluorescence emission maximum is shifted 15 nm to the blue wave length range, resulting in an excitation maximum at 535 nm and fluorescence emission maximum at 617 nm.3 as shown in figure 1. However, with the increasing proportion of dead to live cells the red PI fluorescence increases linearly.2 PI delivers a rapid, quantitative analysis and the possibility of wide use in various instruments: fluorescence microscopes, confocal laser scanning microscopes, flow cytometers or microplate readers.3 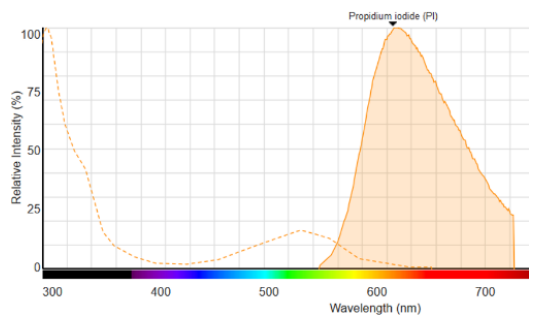 Initiating cell death: To induce the cell death during this exemplary cultivation, either the temperature is set to 50° C for or pure methanol (MeOH) is added 7 hours after the cultivation has started.

Determination of cell death: After the induction of the cell death, the PI penetrates the cell disrupted cell membranes and binds to DNA resulting in a fluorescence shift. The signal is then detected by the PI filter module.

Various examples of the use of the detection of death cells in the BioLector® Pro with the help of PI staining are shown in the following.

Background fluorescence signals: A precultivation experiment (see figure 2) shows that the microbial growth was minimally impaired by 5 µM PI compared to the non-stained culture (E. coli control) resulting in a longer lag phase of + 0.5 h visible in the scattered light as well in the dissolved oxygen (DO) signal. Furthermore, a PI background fluorescence cross signal in the nonstained culture and an increasing background PI signal in the PI treated culture is observable. This can be caused on the one hand by the fluorescence of other metabolites during the growth. On the other hand, dissolved PI is able to penetrates the cell membrane of living cells as well. Membrane disruption arises for example through cell division, cell wall synthesis or by injury during stress. Thus, an increase of the PI signal in living cell populations over the time is visible. 2 This background signal should always be considered to avoid that viable cells are detected incorrectly as dead cells. For a better comparison of the impact of the different stress factors (MeOH or heat shock), stress factors were applied at the same cultivation time (7 hours) in all experiments.

After 7 hours of the cultivation time, the addition of 27 %v/v MeOH stalled growth, detectable in the scattered light signal and in the DO: The DO signal increased to the initial value (100 %) immediately after the MeOH addition, suggesting the initiation of cell death. The addition of 9 %v/v MeOH led to a slowdown in the scattered light signal indicating a decrease in the slope of the growth correlated to the DO signal. For example, in figure 2 control cells reach O2 limitation due to rapid growth rates as compared to the stressed cells with 9 %v/v in figure 3. The final PI signal after 18 hours is 2,54 a.u. for 27 %v/v MeOH and 1,57 a.u. for 9 %v/v MeOH treated cells. The values are blanked against medium containing 5 µM PI.

It is important to consider that this signal is a relative value and is highly dependent on the measurement timepoint and final cell number because of the exposure time of the cells to the PI and thus the above-mentioned background signals increasing with the time. Thus, the MeOH treatment and the PI determination should always be done at the same time point.

Determination of cell lysis: The PI measurement in the BioLector can be a helpful tool for the determination of cell lysis during the cultivation experiment. In the following example cell lysis is induced by increasing the cultivation temperature from 37° C to 50° C after 7 hours as shown in figure 4. The scattered light signal shows no further growth for E. coli with 5 µM PI and as well for the control strain one hour after the heat treatment was started. The growth curve of E. coli (+ 5 µM PI) without heat treatment is showing an exponential growth until the stationary phase is initiated after 11 hours. With a lag time of 2 hours after heat treatment the cells start to lyse and thus the PI signal increased linearly and saturated at around 14 hours of the cultivation time. The delay time of 2 hours is caused by the time the heat needs to distribute in the fluid and act in the cells. Regarding the PI curve of the non-heat-treated strain a background fluorescence signal is visible during the exponential growth phase. 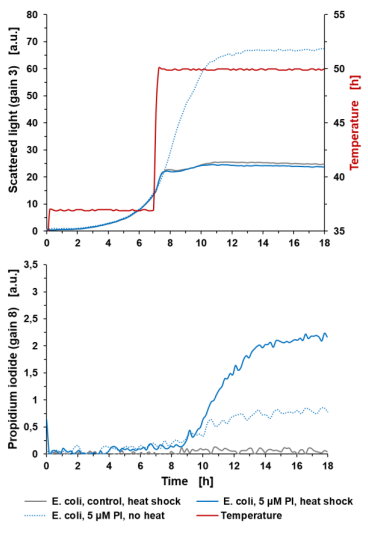 Determination of stressed cells. The combination of the scattered light and the PI signal is useful to identify stressed cells in a running cultivation experiment. In the following example, E. coli BL21 was cultivated in Wilms-MOPS media using two different MOPS buffer concentrations. In figure 5 the experiment results regarding the scattered light, DO, pH and PI are plotted against the cultivation time.

The solid blue line represents the results of the cultivation in 200 mM buffered Wilms-MOPS and the dashed line of the 50 mM buffered medium. If the focus would be on the biomass signal alone, it can be assumed that the biomass increases to higher values in 50 mM buffered media than in the 200 mM buffered one. However, the PI and DO signals are showing contrary results. Thus, is not due to biomass but particles released into the media due to cell disruption. The pH value of the lower buffered culture drops rapidly below pH 5.5 and thus below the optimal pH range during the exponential growth phase between 5 and 9 hours. This leads to a growth stop validated by the DO signal which shoots up after 9 hours as soon asthe pH drops below pH 5.5. Consequently, the DO jumps to the initial value of 100 %. In contrast, the pH in the 200 mM buffered media is more stable. During the exponential growth phase, it drops from pH 7.3 to 6.5 after 9.5 hours. Regarding the DO signal a presumably diauxic shift is visible at 10 hours cultivation time. Here E. coli is consuming the produced acetate resulting a slower increase of the DO towards the cultivation end. Furthermore, the pH increases to pH 6.7. Altogether, the pH optimum can be ensured during the entire batch cultivation process leading to a better condition of the bacteria in the 200 mM buffered medium compared to the lower buffered ones. The PI signal is showing a much higher signal of the lower buffered culture compared to 200 mM buffer concentration. Compared to the high buffered culture the PI signal of the lower one is increasing exponentially after 11 hours of the cultivation time due to cell disruption cause by the low pH as stress factor. In the end of the cultivation process this value is 2.5 times higher than the background signal of the 200 mM buffered culture. With the information of the scattered light signal in combination with the PI signal, it can be concluded that the growth in 50 mM buffered media isn’t better. Nevertheless, it is the cell lysis process which we can trace at the end of the culture. This lysis leads to an increase of fragments in the cultivation broth and thus to an increase of the scattered light signal and also an  increase in the PI signal, due to the available free DNA.

This application note shows extensive application examples using PI staining method in the BioLector to identify dead or stressed cells during running cultivation processes. There are still many development possibilities such as the calibration of the PI raw signal with the cell count of dead cells. Furthermore, live/death viability testing could be developed in the future using additional filter modules to measure the living cell fraction, which allows ratio metric measurement of the dead/living cells in relation to the total cell count.