Choosing the right promoter for efficient protein production plays a major role in strain and process development not only in academic research but also in the biopharmaceutical industry. The methylotrophic yeasts Hansenula polymorpha (H. polymorpha or Ogataea polymorpha) and Pichia pastoris (P. pastoris) have both proven to be effective hosts organisms for heterologous gene expression resulting in the large-scale production of a variety of recombinant proteins. They are also attractive because their use of methanol as the sole carbon source requires a unique set of metabolizing enzymes whose production is tightly regulated.[1] H. polymorpha is a widely used expression host for recombinant protein production because of its unique characteristics: First of all, it is thermotolerant which is advantageous regarding mammalian protein production such as those requiring 37° C temperature to preserve its biological activity. Additionally, the presence of a protein glycosylation pathway allows the production of eukaryotic recombinant proteins while hyper glycosylation is avoided. Additionally, the capability of using methanol as a carbon source allows the isolation of strong methanol inducible promoters. Furthermore, H. polymorpha can utilize other carbon sources such as glycerol, glucose, xylose and cellobiose.[2]

In the presence of methanol, H. polymorpha produces copious amounts of alcohol oxidase and other enzymes required for the metabolism of methanol. Thus, the vacuole in which the enzymes are formed fills much of the interior of the cell. This unique property has been utilized for expression of foreign proteins through linkage of the gene of interest to the gene for alcohol oxidase. [3] By linking heterologous genes to the promoters of the alcohol oxidase genes high levels of recombinant proteins can be achieved.[1] Particularly high protein titers can be achieved in H. polymorpha using strong promoters like the formate dehydrogenase (FMD) or the methanol oxidase (MOX) promoter at ideal cultivation conditions. The high secretion capacity of methylotrophic yeasts in combination with well-established high cell-density fermentation techniques resulted in secretion of heterologous proteins up to levels of several grams per litre [4] . Both promoters are tightly repressed by glucose or ethanol and highly induced by methanol as sole carbon source. The MOX promoter is unrepressed by glycerol or glucose fed under growth-limiting rates.[1]

In this application note a pH profiling for a maximized green fluorescent protein (GFP) yield in H. polymorpha has been conducted using the microbioreactor BioLector. Within this highthroughput fermentation study, we investigated strains of H. polymorpha containing the FMD and the MOX promoter, to determine the preferred pH range for efficient protein production. Up to now, the investigated low pH range between pH 4 to 6 has been very challenging to measure and control in small scale cultivation systems. Here, optical pH optodes are the measurement system of choice. Most commonly available optodes only provide reliable results within the physiological pH range. In this study, we integrated recently published low pH optodes into the BioLector, to perform reliable non-invasive pH screening and enables pH controlled fermentations for efficient protein production. The pH is controlled via microfluidics in microtiter plates (MTPs) and is measured optically in the infrared spectrum, to reduce interference by background fluorescence in the culture medium. This allows the use of fluorescent reporter genes, such as GFP, to follow protein expression throughout the fermentation at low pH in a high-throughput micro scale fermentation platform.

Cultivation conditions in the BioLector: The cultivation took place in the BioLector in the microfluidic 32 well FlowerPlate®, with optodes suitable for applications in the low pH range (MTP-MF32-BOH3). The plate was shaken at 1200 rpm, at a cultivation temperature of 30 °C. Each cultivation well was filled up with 800 µL of culture broth. The pH was regulated two-sided via the microfluidic chip to different pH set points between pH 4 – pH 6 using 3 M NaOH and 3 M HCl as pH adjusting agents.

Batch cultivations in YNB-G medium at different buffer concentrations: A prior screening experiment was performed to investigate the tendency of the GFP dependence on the phosphate buffer concentration in the media and the naturally established pH without pH regulation. For this, batch cultivations of H. polymorpha RB11 FMD-GFP took place in YNB-D with phosphate buffer concentrations adjusted either to 25 mM, 50 mM or 100 mM. The resulting GFP and pH values are plotted against the cultivation time as shown in figure 1. Because the FMD promoter is repressed as long as the glucose is present in the medium, the GFP expression is induced when the glucose level is low or completely consumed. As expected, the lower the buffer concentration in the medium, the faster and more rapidly the pH value drops. Correlatively, the GFP production starts earlier in lower buffered media than in the high buffered one. A reason could be that lower buffered media have a lower osmotic pressure and thus lead to better cultivation conditions resulting in a higher GFP yield. Another reason could be that the pH value drops faster with the low buffered media and that this low pH environment is superior in terms of metabolic productivity. 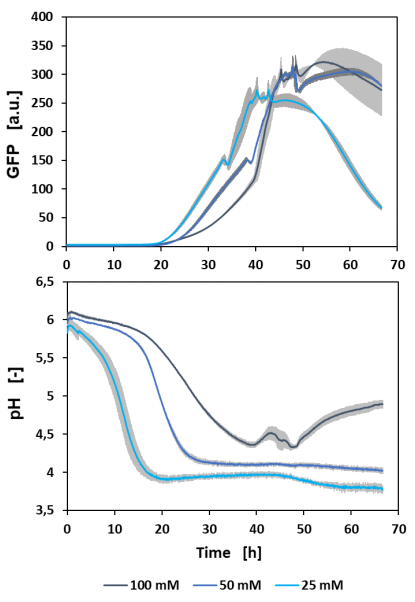 Figure 1: Batch cultivation of H. polymorpha RB11 FMD-GFP with online measurements of GFP and pH. Biological triplicates were cultivated at 1200 rpm in a FlowerPlate®. The mean values (blue line) with the standard deviation (grey area) were plotted against the cultivation time.

PH profiling to investigate the best conditions for an efficient GFP expression: In a following batch cultivation experiment of H. polymorpha RB11 FMD-GFP the 25 mM buffered media was used and the pH was adjusted and controlled during the cultivation via the microfluidic chip technology of the BioLector. In total, the GFP expression performance at the pH setpoints between pH 4.0 and 6.5 was analyzed. The GFP and pH control of three cultivation examples are shown in figure 2. As seen in the preliminary batch experiment, the lower the pH setpoint is set, the earlier the GFP expression starts. In addition, the slope of the GFP signal is steeper in the lower pH range. Due to the fact that GFP is not stable in the lower pH range [5] , we can give a qualitative rather than a quantitative statement about GFP production here. 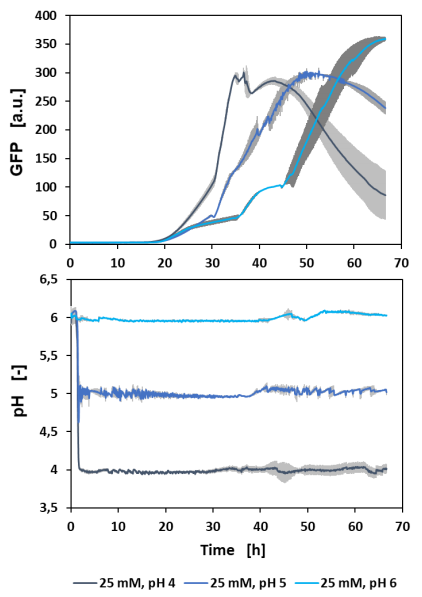 Figure 2: Microfluidic batch cultivation of H. polymorpha RB11 FMD-GFP with online measurements of GFP and pH. Biological triplicates were cultivated at 1200 rpm in a microfluidic FlowerPlate® each with a two-sided pH control with 3 M NaOH and 3 M HCl. The mean values (blue line) with the standard deviation (grey area) were plotted against the cultivation time.

A closer look at the maximum GFP signal (figure 3) and subsequently the calculation of the spacetime yield of the GFP expression (figure 4), each plotted against the adjusted pH-setpoint, confirms the assumption that more GFP is expressed at low pH values. Although the highest GFP signal (359.35 a.u.) was reached at pH 6, the space-time yield (STY) of GFP expression still shows a decreasing tendency with increasing pH. With 10.24 I/mL*h the maximum STY was achieved at pH 4.0. However, please note that the GFP serves here as a substitute for the protein of interest. GFP degrades much faster at pH 4 than it does at higher pH values, thus only a qualitative comparison is possible here. 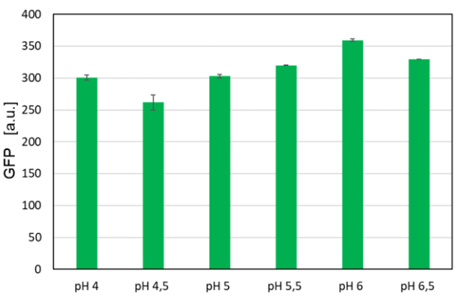 Figure 3: Maximum GFP values reached in H. polymorpha FMD-GFP cultivations at different pH conditions. Biological triplicates were cultivated at 1200 rpm in a microfluidic FlowerPlate® with a two-sided pH control adjusted to different pH-setpoints between 4 and 6.5. 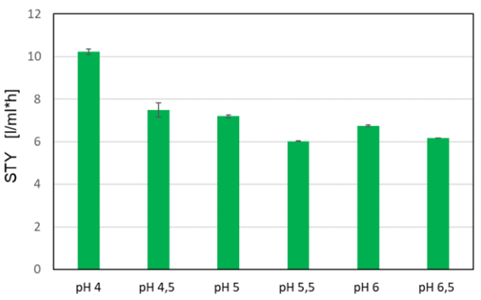 Figure 4: Space-time-yield of GFP reached in H. polymorph FMD-GFP cultivations at different pH conditions. Here, biological triplicates were cultivated at 1200 rpm in a microfluidic FlowerPlate® each with a two-sided pH control with 3 M NaOH and 3 M HCl adjusted to different pH-setpoints between 4 and 6.5.

With the help of the microfluidic option of the BioLector microbioreactor up to 32 parallel fermentation experiments at different pH setpoints can be performed on one MTP at the same time. Using

this technology, the best cultivation conditions regarding the recombinant protein production in H. polymorpha could be identified.

Comparative study to evaluate different promoters for the GFP expression: In the following example the cultivation data of H. polymorpha RB11 FMD-GFP and H. polymorpha RB11 MOX-GFP is compared to evaluate the properties of the FMD and MOX promoter concerning the GFP expression at a fix pH setpoint of pH 4.5. In figure 5, the biomass and DO signals as well as the pH and GFP values of both strains are plotted against the cultivation time. With regard to the biomass and DO curves, in both cultures a similar growth behavior is observable. However, a closer look at the GFP signal indicates a 7-fold higher GFP signal in H. polymorpha RB11 FMD-GFP. 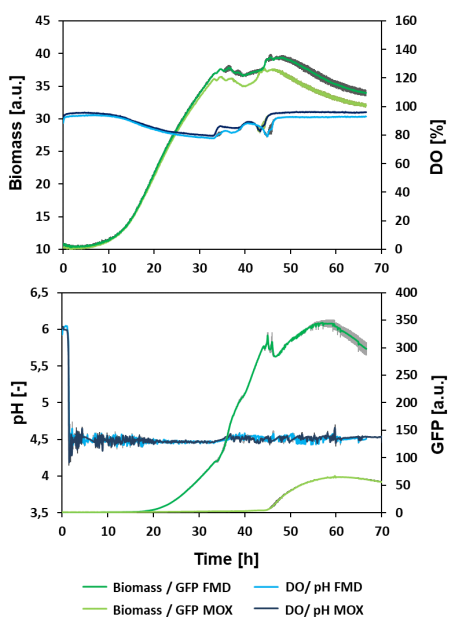 Figure 5: Comparison between microfluidic batch cultivations of H. polymorpha RB11 FMD-GFP and H. polymorpha RB11 MOX-GFP. Biological triplicates were cultivated at 1200 rpm and a two-sided pH control. The mean values(blue line) with the standard deviation (grey area) were plotted against the cultivation time

This application note demonstrates the successful pH and strain screening to identify an optimized protein expression in H. polymorpha using the non-invasive online measurement of biomass and GFP, pH and DO in the BioLector microbioreactor. In this study it was found that a lower pH and FMD promotor was favorable for GFP expression, representative of protein of interest production. Furthermore, we show that the BioLector can be used to assess a various number of cultivation conditions like different phosphate buffer concentrations in the medium could be tested at one time. Using the pH control function via the microfluidic chip technology in combination with the low-pH optodes a two-sided pH control is possible. Moreover, we show reproducible results for online measurements in the pH range from pH 4 to 6 although the strong background fluorescence of GFP is present.