Radiant Genomics and Beckman Coulter Life Sciences have developed a low-volume, multiplexed next-generation sequencing (NGS) library preparation method using the Echo 525 Liquid Handler. In addition to cost savings, we demonstrate an increase in sample-processing throughput with the Echo Liquid Handler due to efficient multiplexing, which would otherwise remain impractical using traditional liquid handling automation. In addition, the barcoding and combinatorial pooling strategy outlined here can be applied to workflows beyond NGS.

It is now known that >99% of biodiversity is not routinely cultivated in a laboratory setting. As a result, the vast majority of organisms present in our environment have not been studied in great detail from a biochemical perspective. This “uncultivated majority” encodes an enormous number of genes, enzymes, and secondary metabolites that hold value for diverse markets. Radiant Genomics developed a platform for high-throughput gene and small molecule discovery from complex genomes or metagenomes. As a starting point, this platform relies on sequencing, de novo assembly, and phasing of high-density arrays of cloned DNA. As metagenomic environments often contain thousands of unique organisms, achieving these goals in a cost-effective manner depends on high-efficiency read deconvolution and NGS library preparation methods.

NGS has become a ubiquitous research and development tool used in an array of fields, including synthetic biology, and bio-manufacturing. Despite a relatively diverse landscape of sequencing technologies, all methods currently rely on quantitative sequencing library preparation. Specifically, input DNA/RNA must be converted from raw sample to sequencer-ready material through a number of conversions. For the purposes of this study, we focused on the Illumina sequencing platform as it represents a core component of the Radiant pipeline and is widely used.

NGS Library Preparation: The Echo 525 Liquid Handler Can Reduce the Cost by >100x per Sample

There are two primary methods of preparing sequencing libraries for Illumina systems, which can be described as physical (e.g., nebulization) or enzymatic (Tn5-based “tagmentation”).1–3 These approaches generally shear the input DNA to a size range of 300-800bp, which allows for adapter/barcode addition via low-cycle PCR followed by sequencing. Enzymatic fragmentation of DNA using modified Tn5 transposase (Illumina Nextera) is a preferred method for large-scale NGS library preparation due to the simplicity of the workflow, which both shears and tags input DNA in a single step. This process can be routinely performed by a single user or with basic liquid handling automation. One limitation of this method is that, using standard protocols, the cost per sample is approximately $40 including Illumina reagents and general consumables. While this represents an acceptable expense for smaller projects, in order to sequence, assemble, and analyze our metagenomic libraries (which contain >2 terabases of arrayed DNA), it would cost approximately $200M in sample preparation reagents along with matrix/ resin-based purification steps, which preclude scaling beyond standard microtiter plate densities (i.e., 96 or 384 wells) and throughput.

In an effort to address limitations with standard workflows, we undertook a number of experiments using the Echo 525 Liquid Handler with the aim of reducing the cost per sample for NGS library preparation by 50x to 100x. During the course of our experiments, we discovered that Tn5-based enzymatic fragmentation remains effective at low volumes (Figure 1). The net effect of volume decrease is up to a 1,000x initial reduction in reagent utilization during enzymatic fragmentation. We elected to use reaction volumes of 500nL (a 100x reduction) for subsequent steps due to evaporative effects at lower volumes that reduced downstream PCR-barcoding efficiency, increased sample-to-sample variability, and made overall workflow implementation challenging. Overall, we found that with simple volume reduction, the Echo 525 Liquid Handler can realize immediate reagent and cost savings using commercially available NGS library preparation kits.

Next, in an effort to further reduce the cost of NGS sample preparation, we sought to replace column/ matrix-based purification steps in the standard workflow. We found that surfactant-mediated denaturation of Tn5 was sufficient to liberate enzyme-bound DNA for subsequent PCR-mediated barcoding and adapter tagging. This step bypasses column purification, as outlined in standard NGS library preparation protocols. In doing so, it saves consumables cost per sample and also allows for scalability beyond 96/384-well microtiter plates. After surfactant-mediated dissociation, the reactions were diluted 50-fold, which allows for efficient downstream PCR. This process could be scaled easily due to the low initial tagmentation volume (500 nL) followed by immediate dilution into standard PCR barcoding reactions (25 μL). After PCR barcoding and quantification using standard fluorometric strategies, the samples were normalized by transferring a range of volumes with the Echo Liquid Handler and pooled for sequencing.

Overall, the Echo Liquid Handler reduced enzymatic fragmentation reagent use by approximately 100x and allowed for the elimination of all column/matrix-based purification steps from standard NGS library workflows. Finally, normalization procedures for 384-well microtiter plates containing tagged and barcoded samples, which took >2.5 hours using a market leading, traditional liquid handling platform, were completed in less than 4 minutes using the Echo Liquid Handler. The net result of this simple process optimization on the Echo 525 Liquid Handler was a decrease in sample processing cost with an increase in realized throughput (Table 1).

By adding unique oligonucleotide barcodes to each sample, it becomes possible to pool and deconvolute unique sets of reads after sequencing is completed. This process optimizes the number of samples that can be sequenced in a given run. Standard barcoding methods usually rely on square or 2D addressing, where unique barcodes are assigned to each row and column of a microtiter plate. For example, 20 primers can be used to address 96 samples by providing unique row and column barcodes to deconvolute unique positions in a 2D array using dual index calling (Figure 2). In order to uniquely address all samples in Radiant’s metagenomic sample array using this approach, it would require 20,000 primer barcodes, which represents a major expense. To address this challenge, we used a combinatorial barcoding strategy developed by Radiant that scales with an efficiency of N!/ (N/2)!, allowing us to address the same number of samples with only 32 unique primer barcodes. This represents a >600-fold decrease in primer expense. A basic demonstration of this theory is highlighted in Figure 2, with a binary multiplexer.

Barcode multiplexing requires that positions be oversampled in order to achieve the efficiencies described here. In the example shown in Figure 2, each address is oversampled 3 times for a 96- well microtiter plate in order to reduce barcode primer utilization. Based on the output of Illumina sequencing platforms, this does not represent a barrier, as the benefit of lower primer expenses can be easily balanced against oversampling costs. This approach does have one major requirement however, which can only be practically solved using a random access, tipless liquid handling instrument such as the Echo system. Namely, each sample needs to be included in multiple pooled registers. Using traditional liquid handling automation, even a modest number of samples (384) would take >100 hours to pool using a combinatorial addressing system (100-hour estimate was projected based on actual runtime for a portion of the pooling protocol). In contrast, the same pooling strategy was achieved in 18 minutes (in two serial transfers) using the Echo 525 Liquid Handler. This process was only made possible using a random-access tipless transfer platform. 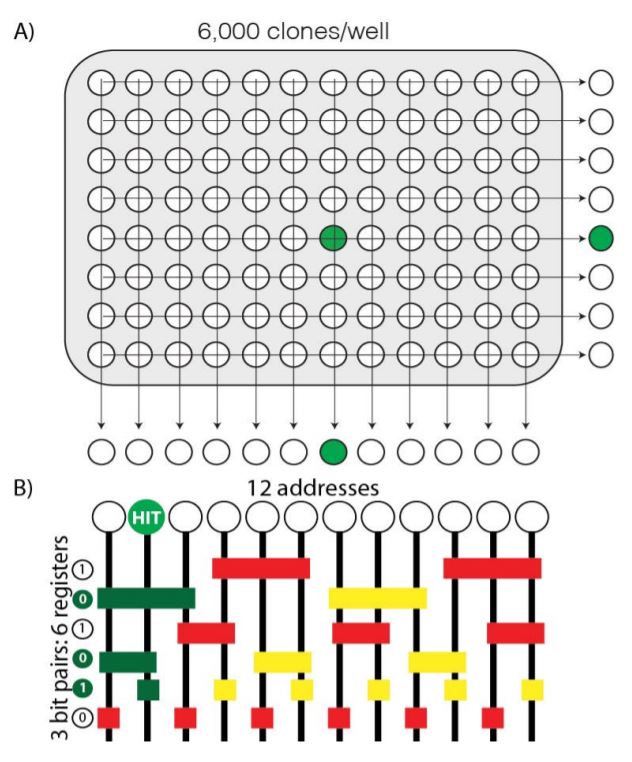 The barcoding and combinatorial pooling strategy outlined here can be applied to workflows beyond NGS. For example, compound libraries can be screened using combinatorial pools, thereby saving cell lines and assayed material. Complex arrays of samples can also be identified and addressed experimentally in a similar fashion by sequencing and deconvoluting combinations of barcodes. Overall, the Echo Liquid Handler represents an efficient means of achieving binary and combinatorial multiplexing which would otherwise remain impractical using traditional liquid handling automation.

We have demonstrated that the Echo 525 Liquid Handler can be directly incorporated into NGS sample preparation workflows, resulting in an immediate reduction in cost for sequencing centers and individual labs with higher throughput requirements. Through the direct volume reduction in combination with slight modifications to standard NGS sample preparation workflows, the Echo Liquid Handler enables significant resource savings. Furthermore, the speed at which re-arraying and normalization tasks can be completed add value to the instrument in any NGS preparation workflow. Finally, the time from instrument installation and training, to workflow implementation was less than 2 weeks, highlighting the ease of use of the platform.

Download PDF
Oops. The page you wanted could not be found, so we brought you to something similar. If you still can't find what you want, try searching our site instead.