Phototrophic cultivation of Chlorella vulgaris in the BioLector XT microbioreactor

Modern bioprocess engineering techniques have enabled scientists to explore the potential of microalgae for the production of energy and valuable compounds1. The recent rise of interest in algae biotechnology has led to significant advancements in the use of microalgae for biofuel production, carbon dioxide sequestration and environmental bioremediation, and revealed algae’s great potential as a source of biomass, food, nutraceuticals and pharmaceuticals2.

Moreover, the use of algae as microbial cell factories provides answers to some of the most urgent global challenges like the food and energy crisis3, and will boost the transition to a sustainable bioeconomy4. Microalgae value chains are potentially profitable and competitive at industrial scale, but biorefineries need to be adapted according to biological potential, process routes and market needs5, 6.

Improved culture conditions, strain screening and strain engineering are critical steps to commercialization7, for example by maximizing the solar-to-product energy conversion efficiency by truncating the chlorophyll antenna size8. Microwell based culture devices provide a powerful tool for rapid and early-stage screening for microbial and mammalian cells9 and have already been used for heterotrophic microalgae bioprocess development10.

Microphotobioreactor (μPBR) systems are needed to investigate optimal auto- or mixotrophic cultivation conditions, but current concepts are far from series technology and further improvement – especially on adjustable illumination – is essential11, 12.

For this Application Note, the BioLector XT microbioreactor is equipped with a sophisticated illumination module to enable parallel, phototrophic cultivations in up to 48 microwells, and specialized filter modules were designed to allow for the online, non-invasive measurement of important cultivation parameters like biomass, chlorophyll concentration and pH. The illumination module or Light Array Module (LAM) allows for precise and diverse lighting regimes within relevant photosynthetic spectra. The spectral flexibility is achieved by a total of 16 different LED-types, which can each be controlled individually, delivering maximum irradiances near 4000 μmol/m2/s.

Chlorella vulgaris can grow phototrophic, heterotrophic and mixotrophic13 and is one of the dominant microalgae genera on the market, with about 5000 tons of biomass produced per year14. C. vulgaris shows high growth rates under versatile cultivating conditions and numerous studies have revealed many applications for biochemical components produced by C. vulgaris15. Its high protein content – with an amino acid profile comparing well to values suggested by the World Health Organisation (WHO) for human nutrition – along with the presence of essential nutrients has led to various applications in the food and feed industry15. Moreover, the accumulation of C16 and C18 fatty acids under unfavourable growth conditions16, 17 presents possibilities to produce biofuels in wastewater treatment plants15. In this AppNote we show that the BioLector XT microbioreactor – equipped with LAM – is suited for the photoautotrophic cultivation of C. vulgaris. Furthermore, several filter modules were designed and validated to monitor crucial cultivation parameters online.

Biomass: For biomass determination with scattered light18, filter modules were developed outside of the chlorophyll absorbance spectrum (>700 nm) to avoid pigment interference19. These filter modules were calibrated against a dilution series of C. vulgaris.

pH: The pH measurement with optodes20 cannot be used under continuous illumination due to the optodes’ susceptibility for photobleaching. As an alternative, the soluble fluorescent pH-indicator 8-hydroxypyrene-1,3,6-trisulfonic acid trisodium salt (HPTS) can be used for optical pH determination21, 22. For this approach, two modules were designed which need to be installed simultaneously due to the ratiometric nature of the pH-determination via HPTS.

At an emission wavelength of 520 nm, HPTS has pH-dependent fluorescence intensities at excitation wavelengths of 405 and 455 nm, respectively. The intensity ratio IR (Eq. 1) is stable in the pH 0 to 14 range21 but pH-values cannot be calculated without prior calibration22. Fitting calibration results to the Boltzmann equation allows the calculation of calibration parameters pH0, dpH, IR,min and IR,max (Eq. 2)23.

With the designed filter modules, calibration curves were made to evaluate the potential of pH determination via HPTS in the BioLector XT microbioreactor. Furthermore, the susceptibility of this method against photobleaching was tested under typical phototrophic cultivation conditions.

Axenic Chlorella vulgaris was obtained from the Culture Collection of Algae at the University of Göttingen (SAG Strain Number 211-11b).

Cultures were grown in an adapted recipe of the enriched Bold’s Basal Medium (enBBM), at a pH value of 6.524-27.

For cultivations in the BioLector XT microbioreactor a HPTS stock solution was added to the medium to a final concentration of 0.1 mg/L HPTS.

Precultures were cultivated in shake flasks in an incubator at 25 °C at 180 rpm with a shaking diameter of 50 mm. To allow for phototrophic growth, an LED-module was installed to one of the sides of the incubation chamber and cotton plugs were used to allow the transfer of gases to and from the culture broth. The LED-module held eight sun-like LED-Strips (LUMITRONIX LED-Technik GmbH) in parallel setup. The irradiance was set at 200 μmol/m2/s to match the irradiance during cultivation in the BioLector XT microbioreactor.

Phototrophic cultivation was performed in Flowerplate microtiter plates (M2P-MTP-48-B, m2p-labs (now part of Beckman Coulter Life Sciences)28) with an initial cell concentration of 5.5*10^6 cells/mL and 1 mL filling volume. The microtiter plate was sealed with gas permeable sealing foil (MTP-F-GPRS-48-10) to allow the exchange of carbon dioxide and oxygen during photosynthesis. The illumination module was set to deliver a sunlike spectrum from 400 to 700 nm at a photon flux density of circa 200 μmol/m2/s (Figure 3). 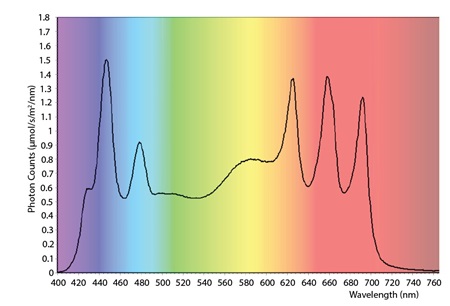 Cultivation parameters were set at 800 rpm, 25 °C and 85 % relative humidity and gassing was performed at a 10 mL/min flowrate with a mixture of air and 2 % CO2.

Biomass: The developed biomass filters at 730, 750 and 850 nm showed excellent calibration results in a range 0.3 ≤ OD750 ≤ 25, as demonstrated in Figure 3 for the 730 nm module. Furthermore, no chlorophyll interference was detected against chlorophyll a and b standards. 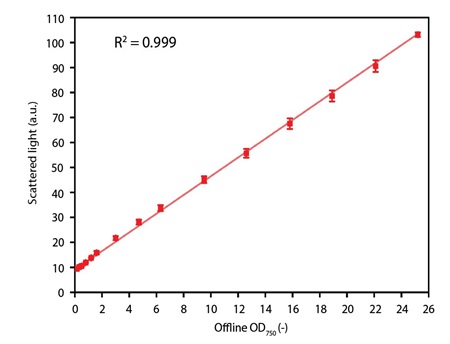 Chlorophyll content: The chlorophyll calibration results revealed that the designed filter modules allowed the separate and simultaneous detection of chlorophyll a and b (Figure 5). 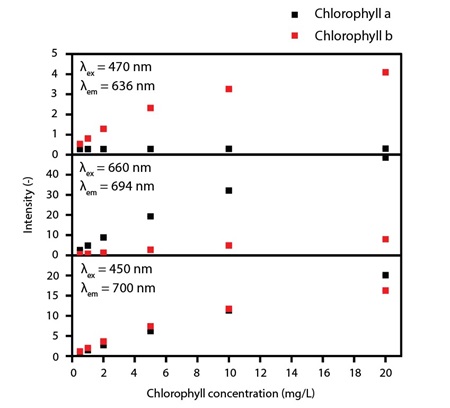 Figure 5. Calibration of the chlorophyll fluorescence filter modules against dilution series of chlorophyll a (black) and chlorophyll b (red).

Chlorophyll fluorescence is often used for biomass determination for phototrophic cultures29, 30. Accordingly, a calibration with a diluted biomass series was performed and an excellent resolution at low biomass concentrations was observed when an exponentially decreasing fit was applied (Figure 6). 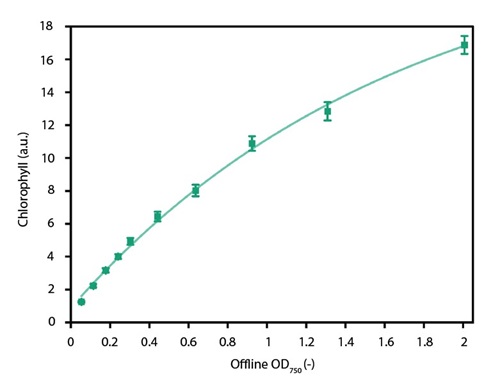 pH: The pH filter modules were calibrated at 25, 30, 35 and 40 °C with buffer solutions from pH 5 to 10 (Merck, Darmstadt, DE), containing 0.1 mg/L HPTS. The excellent calibration results (Figure 7) confirm that the proposed setup can be used for accurate, online pH determination. 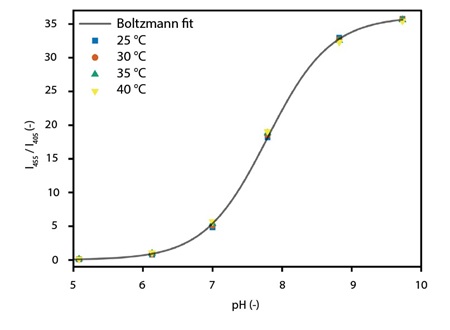 Figure 7. Calibration of intensity ratio IR against pH, fitted to the Boltzmann equation.

To ensure the insensitivity of the proposed method towards photobleaching, an experiment was run in the BioLector XT microbioreactor under typical cultivation conditions at 200 μmol/m2/s in enBBM without inoculum (Figure 8). 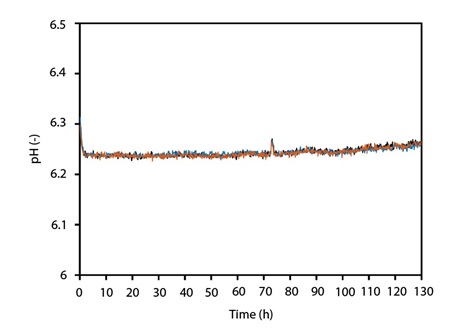 The increased CO2-concentration quickly acidifies the medium (~0.05 pH) at the start of the experiment, but afterwards the measured values remain constant for at least 130 hours (Figure 8). This proves that a multiple-day, accurate and stable pH determination under cultivation conditions and especially under continuous illumination is possible with HPTS.

Next, a long-term cultivation was started and online monitored with four of the presented filter modules: the scattered light module at 730 nm, the chlorophyll fluorescence filter module (λex = 450 nm; λem = 700 nm) and both HPTS filter modules for the ratiometric pH determination (Figure 9). Figure 9. Scattered light, chlorophyll, and pH during a 16-day cultivation in the BioLector XT microbioreactor in combination with an
illumination module.

Figure 9 shows a continuously increasing biomass concentration for approximately 16 days until the CO2 supply was shut off. Five distinct growth phases are seen: starting with a lag and exponential growth phase (I.), followed by three distinctive linear growth rates (II. to IV.) and a death phase (V.) after CO2 depletion. The course of the pH and chlorophyll signal correlate to the observed growth phases. The scattered light signal’s mean coefficient of variation throughout the experiment is 5.2 %, allowing for parallel phototrophic cultivations in the proposed setup. Offline samples confirmed the accuracy of the online signals. Sampling after 235 hours – where an increased pH is seen due to a brief exposure to the atmospheric CO2-concentration – resulted in offline OD750 values of 40 and an offline pH of 7.3, correlating well to the online determined pH of 7.2. At the end of the experiment, offline OD750 values were around 60, indicating a strong growth during the experiment, leading to high biomass concentrations.

The excellent resolution for biomass determination at low concentrations seen with the chlorophyll fluorescence filter module complements the scattered light measurement which are most accurate at sufficiently high cell densities18. Moreover, the HPTS-based pH determination has shown to be an excellent alternative for optode measurements, even under continuous illumination.

The long-term cultivation with Chlorella vulgaris confirmed the system’s potential as a parallel, high-throughput photobioreactor in microliter scale. Furthermore, the developed filter modules delivered online information about the cultures’ growth and revealed several distinct growth phases. These results provide a platform that can be used to optimize phototrophic cultivations in several ways and for many applications. The design of the illumination module allows for a wide spectral and irradiance range to be set under different illumination regimes, which could be used to find optimal illumination conditions. These illumination characteristics have widely been reported to influence algae growth12, 31-35.

Gassing flow rates and gas composition can be used to change the experiment’s atmosphere in the BioLector XT microbioreactor, which is an important parameter in phototrophic cultivations as, e.g., enrichment with CO2 leads to higher biomass concentrations15, 33. Other important factors influencing microalgae cultivations are temperature36, 37, pH15, 34, salinity38, carbon source39-41, nitrogen source33, 39 and medium composition42. The BioLector XT system allows for the optimization of all these parameters.

Furthermore, fed-batch cultivation has been proposed to improve lipid productivity43. The potential of genetically engineering algae strains has only been researched and applied scarcely due to regulatory restrictions, but could result in higher growth rates and cell densities, increased production rate or titer, enhanced robustness or higher solar-to-biomass conversion efficiency and photosynthetic productivity1, 8, 44, 45.

All these factors could be researched and optimized using the proposed combination of a BioLector XT microbioreactor and the LAM, accelerating research to provide the answers required to help realize algae’s potential.

Interested in the BioLector XT?
Request more information below