Cell line development is a highly involved and inefficient process. The quest to find cells that stably express and secrete antibodies or other protein products from a transfected pool of cells requires the screening of thousands of wells/cells. The efficiency of this process can be improved by enriching the post-transfection pool for those cells that have taken up the plasmid, such as through culturing the cells in a restrictive medium. However, a drawback to this approach is that the most desirable features – cell growth, protein production, and secretion – are not being assessed. In addition, even cells that have taken up the plasmids are highly stressed under selection conditions and this can adversely affect cell growth or production.

An alternative selection approach can be accomplished through the use of the ClonePix 2 System from Molecular Devices (Figure 1A). This system uses imaging to assay cell colonies formed in semi-solid medium for desirable attributes. Robust cell growth can be determined by colony size and addition of a fluorescent antibody-binding detection reagent to the medium identifies those clones with high levels of antibody secretion. The ClonePix 2 can then pick the preferred colonies from the medium and dispense them into 96-well plates for suspension culture and eventual single cell isolation and expansion.

One difficulty with this approach is consistent plating with the semi-solid medium. The viscosity of the medium makes it challenging to measure and plate consistently and the generation of bubbles can adversely impact the subsequent imaging or picking of colonies. To overcome these challenges, we utilized the Biomek i7 Workstation (Figure 1B) to automate plating of cells in the semi-solid medium.

Figure 1. ClonePix 2 (A) and Biomek i7 Workstation with integrated devices (B).

To prevent cultures from drying out, PBS was added between the wells of 6-well plates offline and plates were brought onto the Biomek system. Prior to plating, fluorescent CloneDetect reagent was added to the semi-solid CloneMedia CHO Growth A (both Molecular Devices) at 1:100. Knowing that a significant volume would be retained in a large pipette and dramatically reduce accuracy, we poured the medium to the fill line of a Beckman Coulter Quarter Reservoir Divided by Length (19 mL).

The automated method counted IgG-expressing CHO cells on an integrated Vi-CELL XR Cell Viability Analyzer and a moving dispense technique was used to transfer 19,000 cells throughout the reservoir to promote even distribution. Using fine pipetting control, cells were slowly mixed in the media and dispensed to 6-well plates without introducing bubbles (Figure 2). Plates were incubated in an integrated Cytomat incubator (Thermo Fisher) for 12 days to allow cells to form colonies and
secrete antibodies. 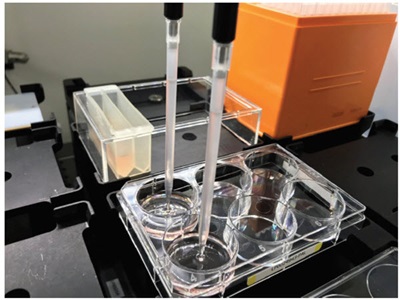 Figure 2. Semi-solid medium automation. The Span-8 pipettors of the Biomek i7 Workstation were used to add cells to medium, mix the cells in the reservoir, and dispense 3mL to 6-well plates.

Figure 3 shows an overlay of brightfield and FITC images of one portion of a day 12 well. The presence of colonies indicates that cells were still viable after automated plating. The colonies are also spread throughout the well, indicating sufficient mixing prior to plating. This is essential as proximity to other clones can prohibit colony picking. Interestingly, despite using a stable expression line, the heterogeneity of the resulting clones illustrates the value of this selection approach. While most of the larger colonies are positive for fluorescent staining indicating IgG production, only a small portion show the large halo indicative of robust antibody secretion. This suggests that secretion can be a significantly limiting factor when only assaying protein concentration from cell media. 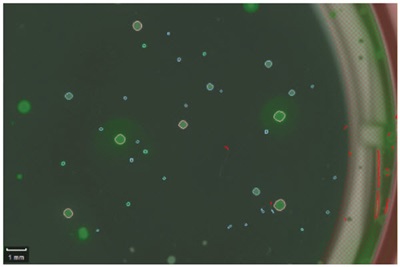 Figure 3. Colony imaging. Overlay of brightfield and fluorescent images of colonies 12 days after automated plating. Only a subset of the
colonies show the desired halo indicating antibody secretion.

While the automated cultures were successfully imaged on the ClonePix 2, we sought to ensure these colonies were able to be picked. We identified 90 colonies to be picked from the 6-well plates based on colony size (largest to smallest). Figure 4 shows the confluence following two weeks of growth after picking. 79 of the 90 wells that should have received a clone showed cellular growth, with picking efficiency declining with colony size as expected. The 88% picking efficiency indicates excellent compatibility of the automated semisolid plating with the ClonePix 2. 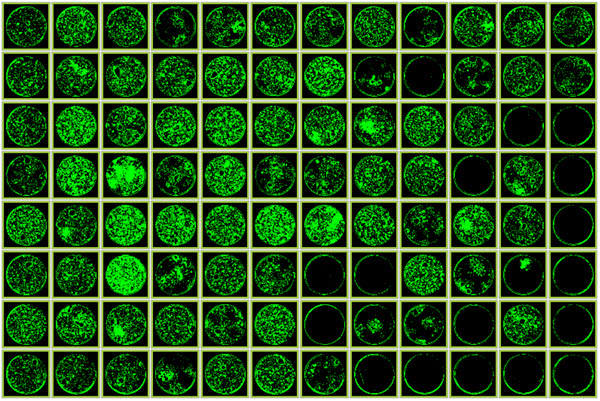 By utilizing fluorescent imaging to score cell growth and protein secretion, the ClonePix 2 achieves better selection relevance than survival in restrictive medium. By automating the plating of cells in semisolid medium, one can relieve the inherent challenges of this reagent to achieve robust colony growth, imaging, and picking.