﻿
Beckman Coulter Life Sciences is proud to introduce our new Vi–Cell BLU Cell Viability Analyzer. The Vi–Cell BLU leverages the key performance features of the Vi–Cell XR but incorporates many design improvements that our customers have requested over the years.While a seemingly straightforward application, automated cell counting can be influenced by a variety of conditions and variables arising from both the sample and instrument. It is therefore important to ensure that the instrument is performing within specifications so that any instrument variability can be eliminated from the sample measurements.To determine the cell counting performance of the Vi–CELL BLU we adapted the protocol outline by NIST (Evaluating the quality of a cell counting measurement process via a dilution series experimental design. Sarkar, Sumona et al. (2017) Cytotherapy, Volume 19, Issue 12 1509 – 1521). By utilizing a dilution series one can assess instrument performance by determining the proportional cell count across the dilutions and replicate samples. In addition to using cells we also evaluated the system using standardized beads that can be used for Concentration, Viability and Size calibration and as cell independent samples for assessing instrument performance. 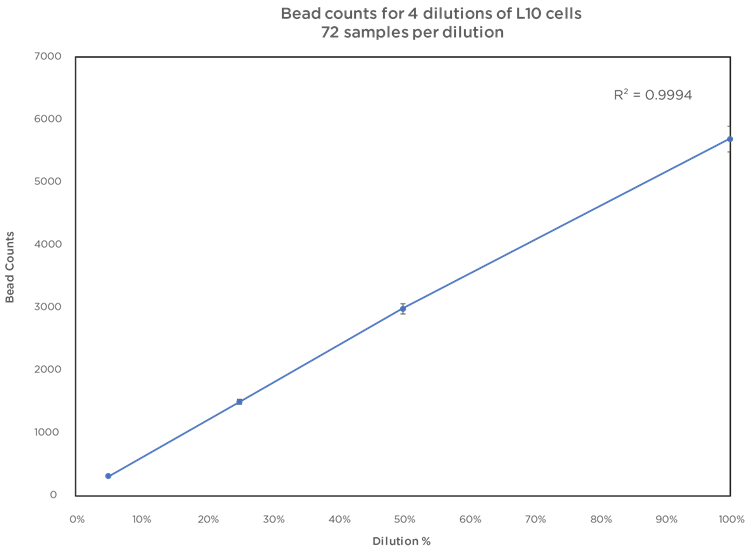 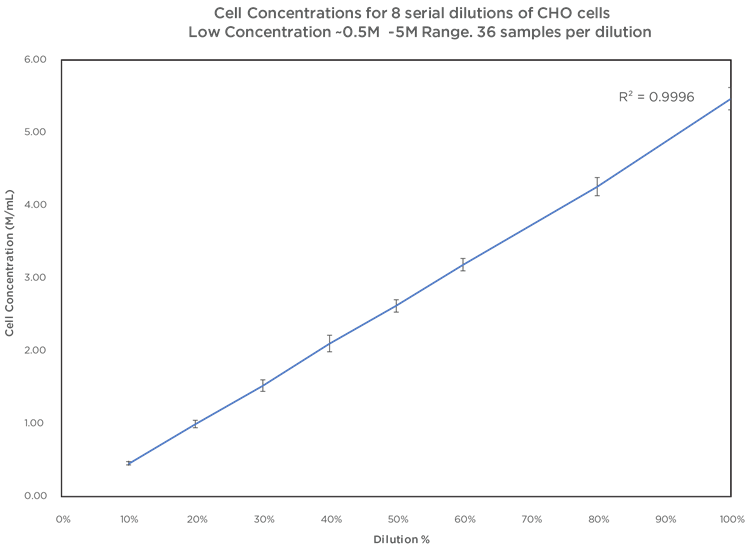 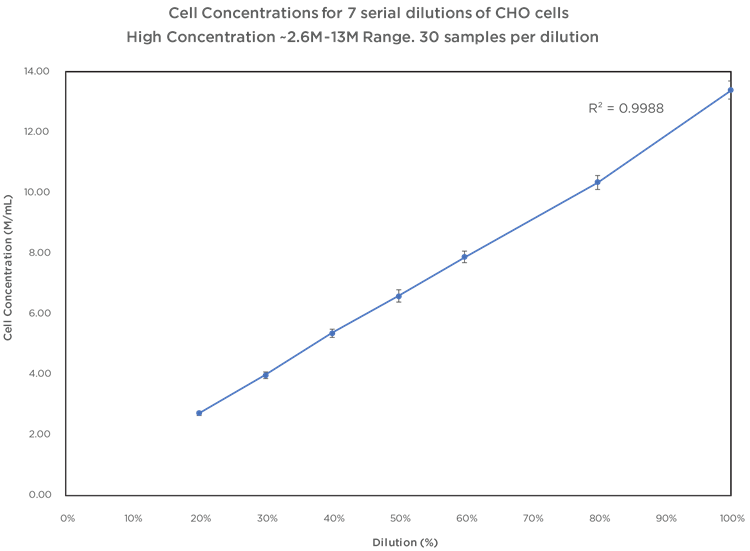 Additional sample plates were run using a smaller range of dilutions to confirm the performance of the instruments. These were repeated 3 times within a 16 hr period using the same stock supply of cells run on the same instrument. During this period cell population increase is considered minimal and the source material for analysis effectively the same.

3 plates were run in triplicate on 3 different Vi–CELL BLU instruments (9 plates total, n=864 samples). The data below shows the average of 216 samples for each dilution.The data collected from these runs was subjected to an ANOVA analysis to determine the degree of variability between the runs and within each run across sample replicates. The results show no statistical significance (p value >90) between all runs, across all instruments.

The counting performance of the Vi–CELL BLU shows excellent linearity over several dilutions covering a range of 0.5M–15 Million Cells per mL. As expected cell counts below 0.5M cells per mL do show a higher variability due to low overall numbers of cells per image frame. Even so the variability remains within allowable limits (10%) for instrument performance. When using standard L10 size beads the variability in counts is significantly lower due to the more uniform nature of the sample material.Utilizing the recommended NIST protocol, the proportional dilution acts as an internal control for cell count ensuring that instrument is counting accurately across different cell concentration ranges. Correlation of the counts and concentration across dilutions has a R2 value of >0.99 showing a consistent counting performance across dilutions. It should be noted that the large number of samples it is possible to run on the Vi–CELL BLU also allows for increased confidence in the cell counts and for easier identification of anomalous results. 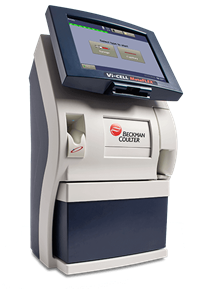 A cellular environment can change quickly. The Vi-CELL MetaFLEX is a bioanalyte analyser that quickly monitors changes in cell metabolic activity. It utilises thick film technology and miniaturised sensors to measure pH, pO2, pCO2, glucose, lactate, electrolytes and more parameters. All tests are carried out on just 65 μL of sample.