One of the most useful features of cell sorters is the ability to deposit cells into a variety of ANSI/SLAS plate configurations. Six well, 12 well, or as dense as 384 well plates are often used for applications such as cell line discovery and development, limiting dilution assays, or single-cell cloning or genomics.

Often questions are asked of the sort operator about how fast plates can be filled, or what sorter (if different options are available) is the best choice for plate output experiments.

Beckman Coulter Life Sciences offers two cell sorters: the MoFlo Astrios, a large, high-parameter (up to 44 fluorescence parameters) cell sorter, and the CytoFLEX SRT, a benchtop cell sorter with mid-range detection (up to 15 fluorescence parameters). There are several reasons to choose one platform vs another including parameter count, laser palette, and space needed to install. Both the Astrios and the CytoFLEX SRT can deposit cells into plates accurately at densities up to 384 wells. Each can also deposit cells using straight down, uncharged droplet sorting to aid with static interactions, or deposition into deep well formats.

Given the plate output similarities between a MoFlo Astrios and a CytoFLEX SRT, this technical note provides information on plate filling speed to use in the decision-making process when selecting a cell sorter.

An effort was made to remove concerns about abundance of target particles as well as tip size and pressure differences. Given the manual set up and control of the MoFlo Astrios and the automated set up the CytoFLEX SRT, this could not be completely eliminated. Table 1 contains the droplet creation parameters for each instrument used in these experiments.

It is readily observed that many droplet generation parameters do not match. It is worth noting why and what that means for experimental design.

The frequency of the vibration of the crystal that drives droplet formation tells the operator how many droplets are being formed every second. This information can be used to guide how quickly events can be sorted from one another with high purity and low aborts. In general, as event rate approaches droplet rate, aborts increase, meaning target particles are going to waste. This is not a concern for this investigation, as target particles will not be a limiting factor. In this case, target loss will be driven by the time it takes the plate to move to the next target well due to the abundance of target events being processed.

The pressure that is required to create droplets through a nozzle is primarily driven by nozzle diameter. The larger the nozzle, the lower the pressure, and vice versa. There is a range of pressures where a given tip will make stable droplets and the pressure used can also affect the frequency that creates stable droplets. With the set pressure of the CytoFLEX SRT this cannot be modified, therefore standard settings were used for MoFlo Astrios based on recommendations in the IFU. As pressure primarily affects droplet frequency, that is not a concern for this plate sort.

Amplitude is how vigorously the crystal must vibrate to generate stable droplets. As this parameter often changes during a sort to keep droplet formation stable, no attempt was made to match these between the two systems.

In the end, the principle of the experiment was to determine if a smaller, more compact cell sorter could fill plates as quickly as a larger, more parameter-rich cell sorter. 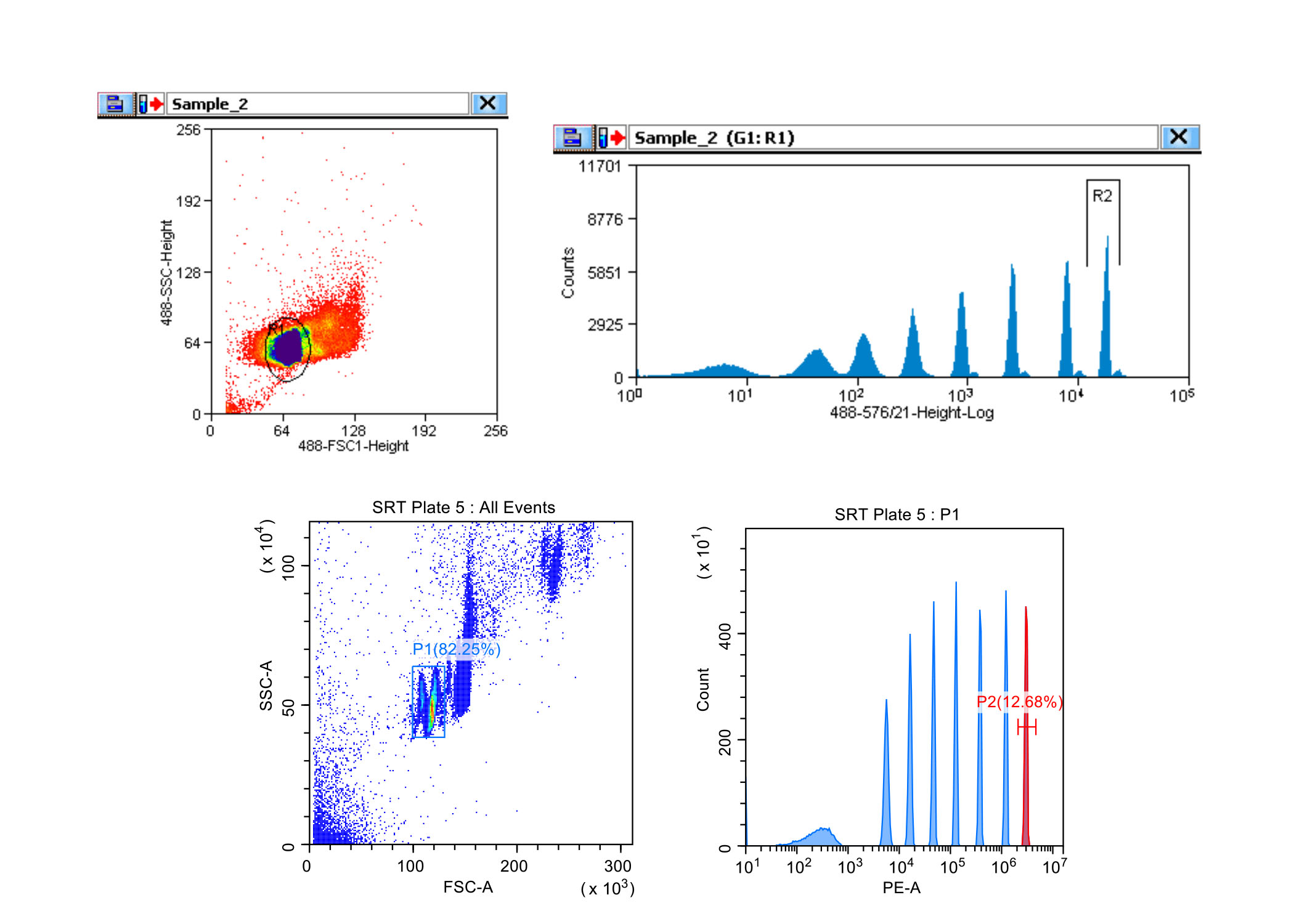 Each sorter was set up to sort the brightest peak of the 8 peak beadset. An attempt was also made to match event per second sample rate of each sorter, keeping in mind that detection differences and sensitivity differences may mean that these samples are running at slightly different rates. Each sorter was set to sort mode single and a sort envelope of 1.

A summary of the time needed to fill plates on each instrument can be seen in Table 2. In this case, repeated over 5 plates, the CytoFLEX SRT is in fact an average of 13-14 seconds faster per plate filled.

The data in this technical note shows that when parameter availability is not a limiting factor, a CytoFLEX SRT cell sorter can fill a plate as fast, or faster than a similarly set up full-size cell sorter. This opens up plate sorting to many more laboratory settings and expands the use of this powerful technology./p> 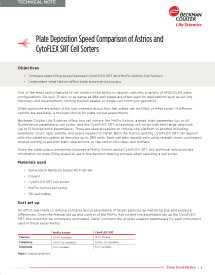