Applications in stem cell biology are an active and growing portion of work performed on cell sorters. Typical applications working with stem cells can include but are not limited to cell-culture cleanup, single-cell deposition for cloning or genomics, and isolation of stem cells from blood, bone marrow, or other primary tissue samples.

In this application note, a method for separating long term hematopoietic stem cells (HSCs) from the bone marrow of adult mice is demonstrated. These cells have the ability to produce all the cells of the blood system as well as daughter HSCs through a process called self-renewal. The isolation procedure begins with setting regions on viable single cells using the cell surface marker strategy published to contain ~60% functional HSCs as measured by single cell transplantation - CD150+CD48- EPCR+CD45+SCA1+. 1;2)

Researchers are often concerned about damage to cells during the sorting process resulting in poor survival and/or expansion of cells in vitro. While in vitro assays cannot be used as proof retention of full stem cell function, they can be used to demonstrate production of multiple mature cell types from single cells. Moreover, these assays can provide examples of a rare stem cell being sorted at single-cell purity with defined functional readouts.

Research in cell biology applications beyond stem cell biology also often calls for sorting rare (<1%) populations from complex mixtures for a variety of experimental endpoints. These data also provide support to those with an interest in rare cell sorting that the CytoFLEX SRT cell sorter had the capability to distinguish these cells and capture them with high purity.

SLAM markers and the more specific E-SLAM set of markers can allow for the isolation of highly enriched hematopoietic stem cell (HSC) populations 1; 2. A sort of this complexity highlights several performance attributes of a cell sorter. First, the sorter requires a high level of optical sensitivity to allow for fine discrimination of cell populations. Along with this sensitivity, there is a need to reduce the spread of populations due to inaccurate photon counting by detectors. The rare nature of these cells in the initial cell suspension (approximately 0.004%) makes every cell valuable, so every well an investigator would like to culture a colony from needs to receive a cell capable of cell division 3;4.

The data presented here are intended to allow others to replicate this work, as well as provide example data showing rare cell sorting and culture growth following sorting.

Cell isolation and staining followed the procedures established in the following publications:

All cell sorting was performed using a CytoFLEX SRT cell sorter following Beckman Coulter recommendations for setup, quality control, and compensation. Deflected plate sorting was used to place cells individually into the wells of round-bottom 96-well plates, each well having been preloaded with 100 to 200 μL serum-free medium (SFM; Iscove’s Modified Dulbecco’s Medium supplemented with 10 mg/mL bovine serum albumin, 10 μg/mL insulin, and 200 μg/ml transferrin, 100 U/mL penicillin, 100 μg/mL streptomycin [all from StemCell Technologies], and 10−4 M β-mercaptoethanol [Sigma-Aldrich]). Each well was then visually inspected to identify those that contained one and only one viable cell. 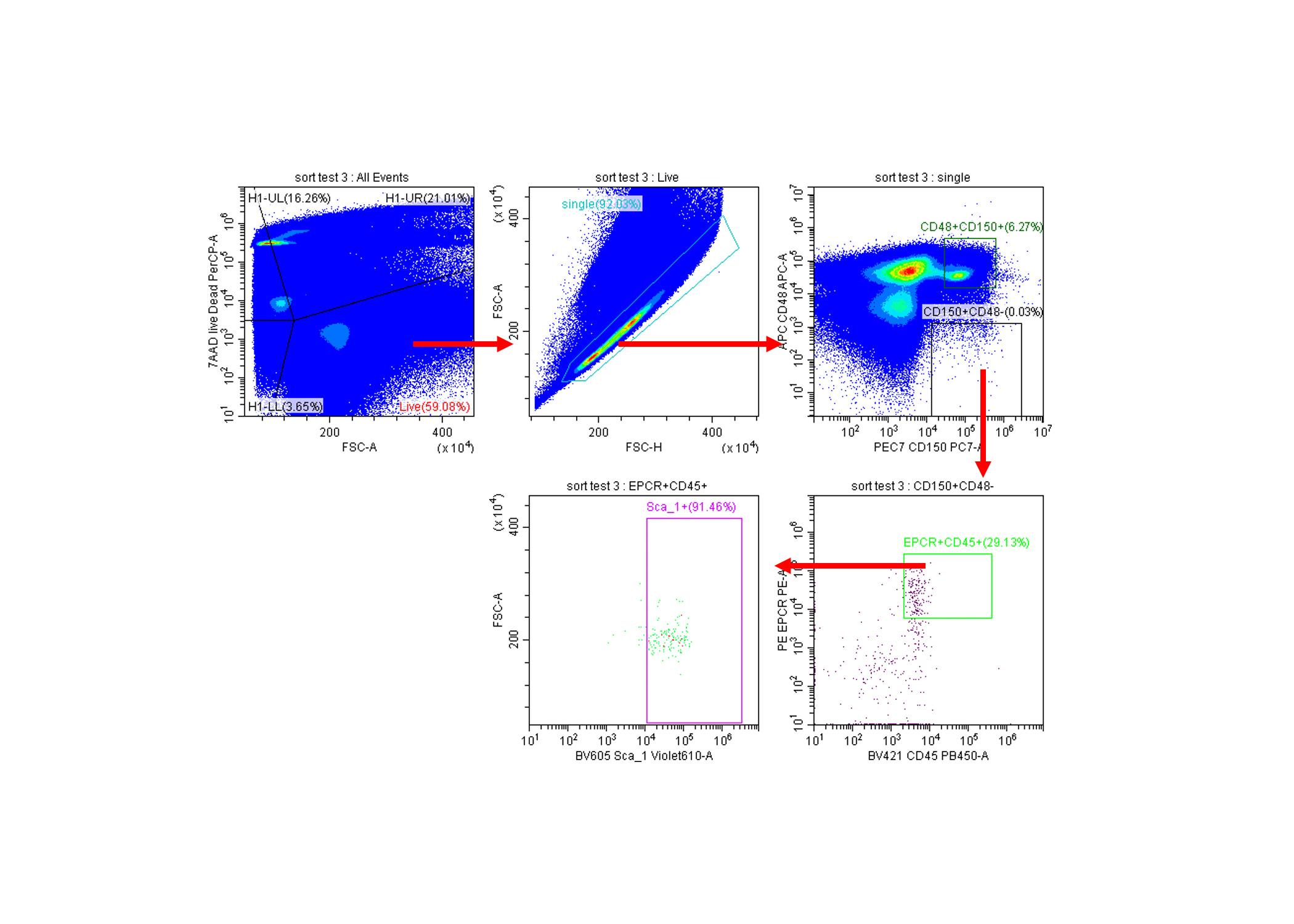 Initial microscopic analysis indicated that all wells received one viable single cell following the sort. Cell were then cultured for a period of 10 days and wells were assayed microscopically to ascertain if these sorted cells were capable of forming colonies (as performed previously in:3;4). This is one way to identify stem cells which are both highly proliferative and retain the phenotypic markers of undifferentiated cells.

An example of a colony growing in a well can be seen in Figure 2.

Checking all wells of the plate indicated that of the 96 wells deposited, 92 wells grew colonies of varying sizes for an overall plate efficiency of post-sort growth of 95.8%. A collection of these cell growth images can be seen in figure 3. 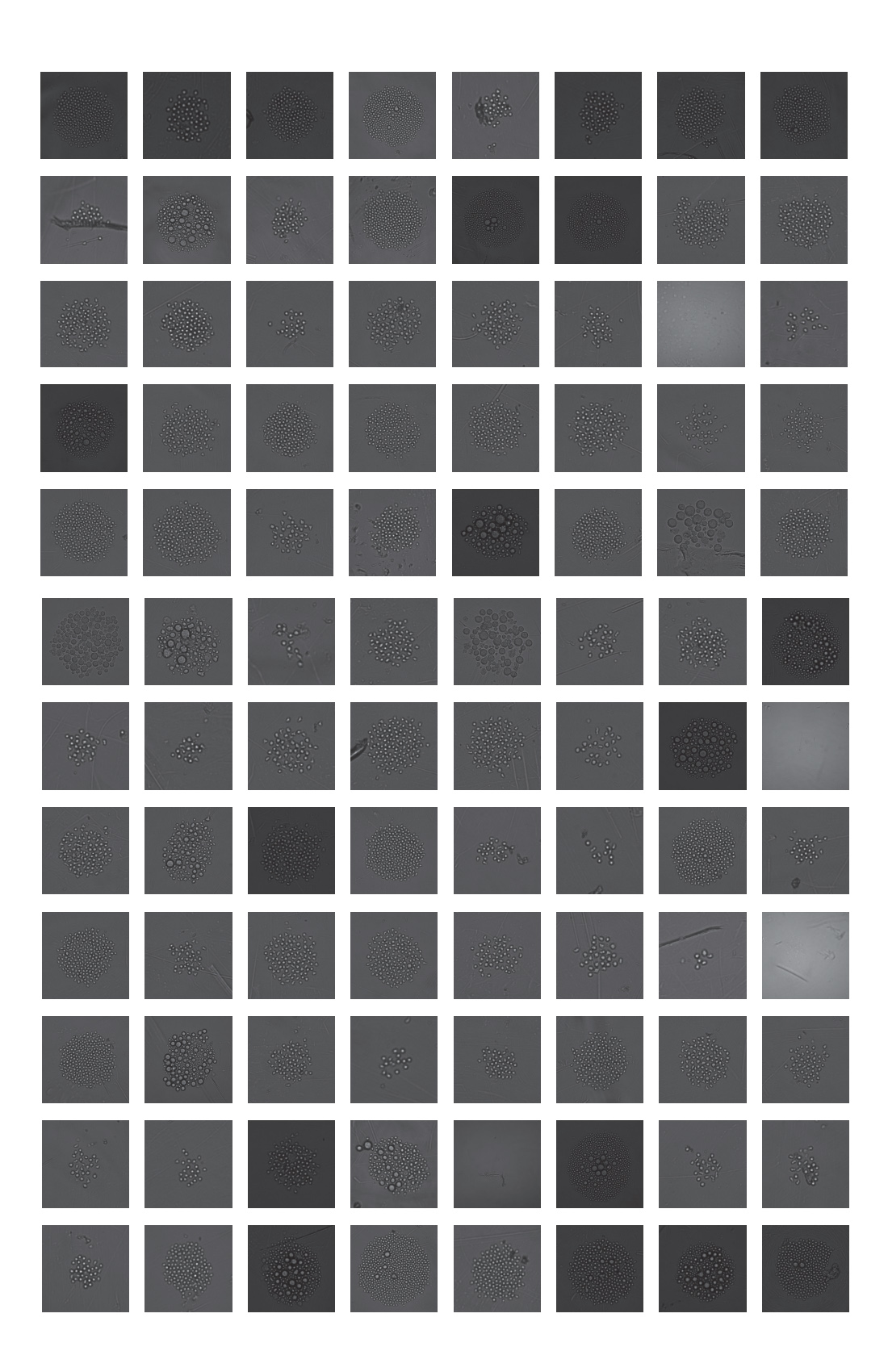 These data support that the CytoFLEX SRT is capable of sorting rare events from a complex sample, highlighting detection capabilities in multicolor experiments, as well as sorting these events. Furthermore, the data shows that these rare cells were capable of division in culture after single-cell deposition, showing high cell survival and colony outgrowth for these rare hematopoietic stem cells. 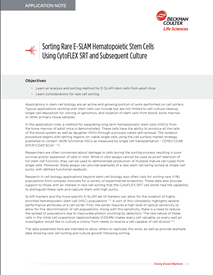