Cultivation of suspended plant cells in the BioLector®

By using the BioLector® technology, this gap can be closed. The BioLector® is an innovative microbioreactor system. Important bioprocess parameters are monitored online without the necessity to stop shaking or to take samples. Screening of cell lines or media optimization can be carried out conveniently even along with design of experiments (DoE). This is possible due to the fact that e.g. growth, limitations or product formation are made visible.

Up to now, the BioLector® was mostly used for fermentation of bacteria or yeasts. In this application note, it is asserted at the example of Nicotiana tabacum that the BioLector® technology can be utilized for cultivation of suspended plant cells in microliter scale just as well.

Operating principle of the BioLector®

First, some basic information about the operating principle of the BioLector® is displayed in Figure 1. It is exemplified by the way of scattered light measurement. 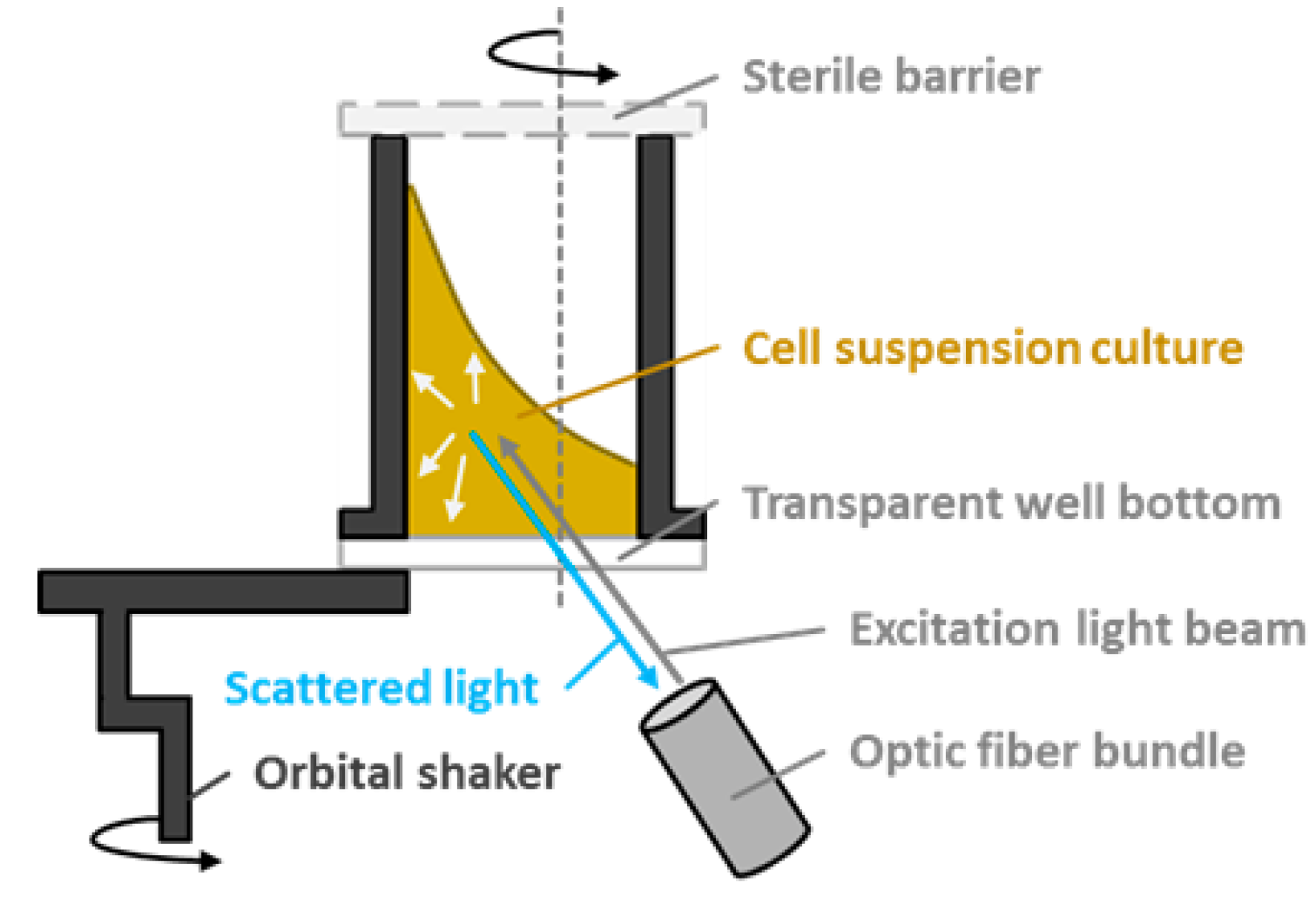 Figure 1: Operating principle of the BioLector®

Excitation light is beamed from an optical fiber bundle into the suspension culture. The light is scattered by particles (= cells) in the culture medium. It spreads in all directions, also toward the optical fiber. Here, the back-scattered light is collected and guided to a photomultiplier. The quantity of scattered light is proportional to the biomass concentration of the cell suspension culture. The measurement of any fluorescence in the visible range works in a similar way: Excitation light beam into well, emission of light, detection. The pH value and dissolved oxygen (DO) are visualized via optical sensors, so-called optodes.

Suspended Nicotiana tabacum BY-2 cells were cultured. The used transgenic cells express green fluorescent protein (GFP) as product, which can be monitored online within the BioLector® easily.
The used culture medium is based on “Murashige and Skoog basal salts with minimal organics”.
4.4 g/L MSMO (Sigma 6899) were supplemented with 0.2 g/L potassium dihydrogen orthophosphate, 0.2 mg/L 2,4-dichlorphenoxyacetic acid and 0.6 mg/L thiamin as well as 30 g/L sucrose, if not declared differently. The pH of the medium was set to 5.8 (before autoclaving).

Preculturing was performed by inoculating 180 mL fresh media (MSMO with supplements and 100 mg kanamycin sulfate) with 20 mL of a seven day old culture. The cells were cultivated at 20 °C in a 250 mL shake flask at 190 rpm (d0 = 50 mm shaking diameter). Main culturing was carried out in the BioLector®: Single wells were inoculated with 10 % (v/v) preculture (approx. 75 % packed cell volume), if not declared differently. 48 well Round Well Plates (Art.-No. MTPR48-BOH) were used. Each well had a filling volume of 1000 µL. The BioLector® was operated at 1000 rpm shaking frequency (d0 = 3 mm) and a temperature of 26 °C. Experiments were carried out in triplicates and averaged values are shown, if not declared differently.

To show the proof of concept of cultivating suspended plant cells in a BioLector® device, reproducibility and the reasonability of the online-monitored signals were investigated first. Thus, 5 single wells were treated in exactly the same way. Scattered light, two fluorescence signals (GFP and NAD(P)H), pH and DO were measured (Figure 2). The progress of all signal curves are discussed in the following. The experiments in wells 1 and 5 were untimely ended in order to take samples. 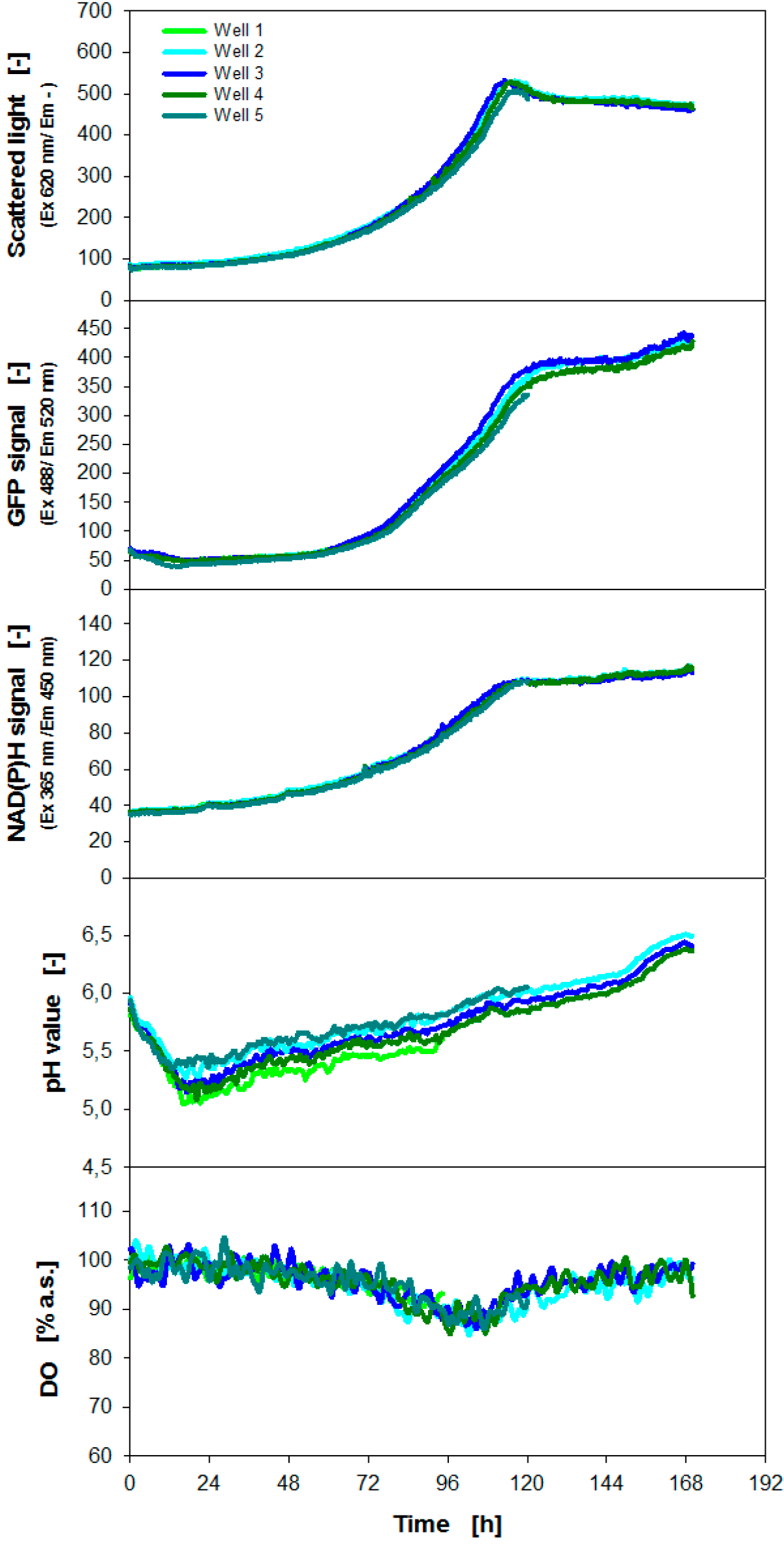 In diagram 2A the scattered light signal is shown and its development demonstrates a typical exponential growth behavior as expected. The drop of the biomass signal at approx. 110 h is not caused by a decrease of intact biomass, but by a change of morphology of the cells, which influences scattered light. Plant cells are shaped roundish in the exponential growth phase and elongate after depletion of the C-source.

The signal patterns of pH (2D) and DO value (2E) look like it is expected. During the first 24 h the pH value decreases from 5.8 to a minimal value of 5.0 followed by a slower increase to 6.5 maximal, likely due to metabolism of nitrogen compounds of the medium. Dissolved oxygen decreases slowly to a minimal value of 85 % a.s. in the exponential growth phase. The curves of pH and DO value are similar in all further experirments. Therefore, they will not be shown in the following diagrams.

In the next experiment the influences of different C-sources were investigated as well as the inoculation volume (Figure 3, next page). Hence, glucose, fructose or saccharose were utilized in the same concentrations (30 g/L C-source). Moreover, the wells were inoculated with either 5 or 10 % (v/v) of preculture.

Diagram 3A depicts that the biomass concentration at the end of cultivation is similar in all differing batches independently of the type of C-source or the inoculation volume. Whereas, the osmotic pressure has a prolonging effect on the lag-phase. Sucrose, as a dimer, has a lower osmolarity than fructose and glucose, which are monomers. Furthermore, variation of inoculation volume (5 and 10 % (v/v)) allows to get an idea about the doubling time of the cells by comparision of the points in time of depletion of the C-source. 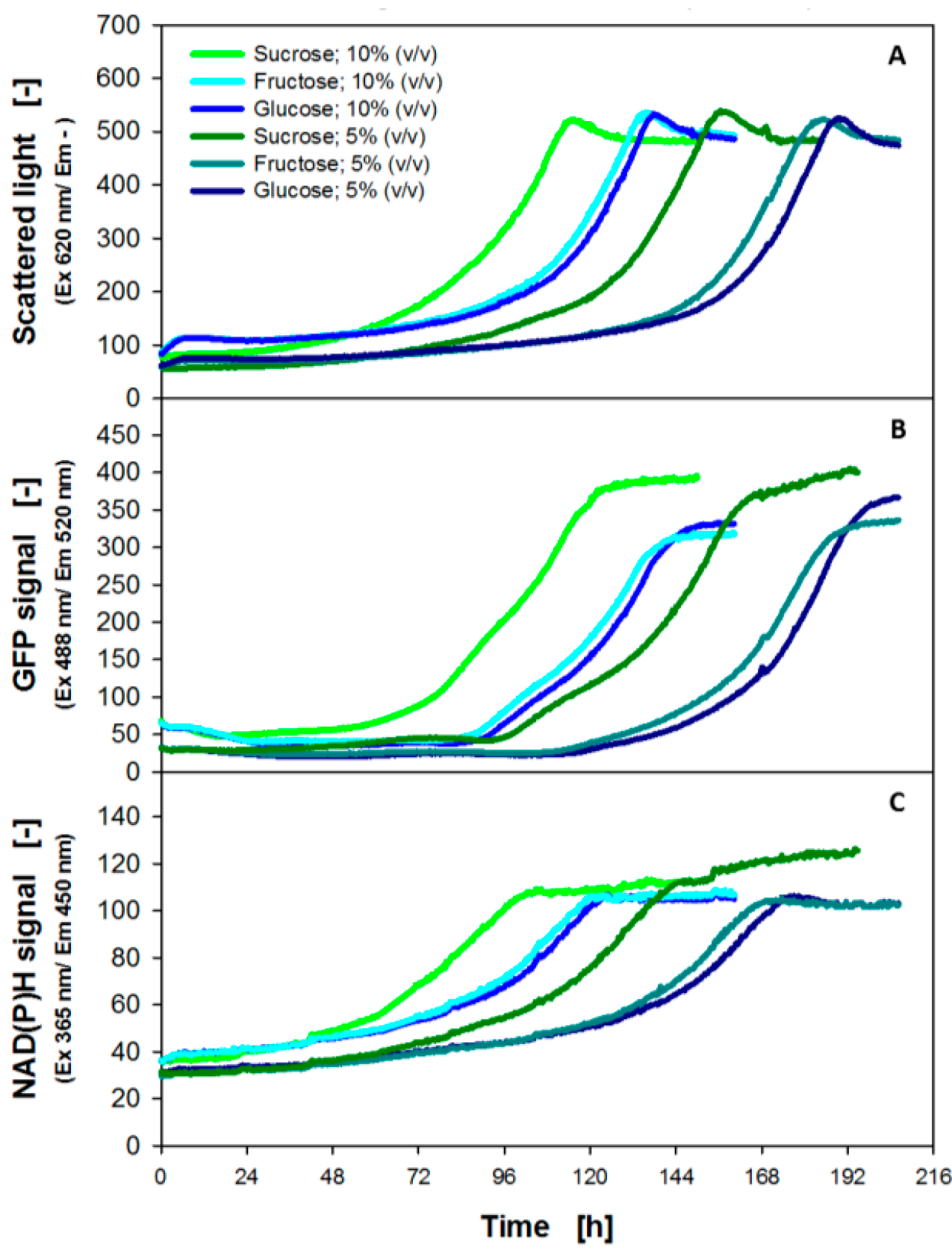 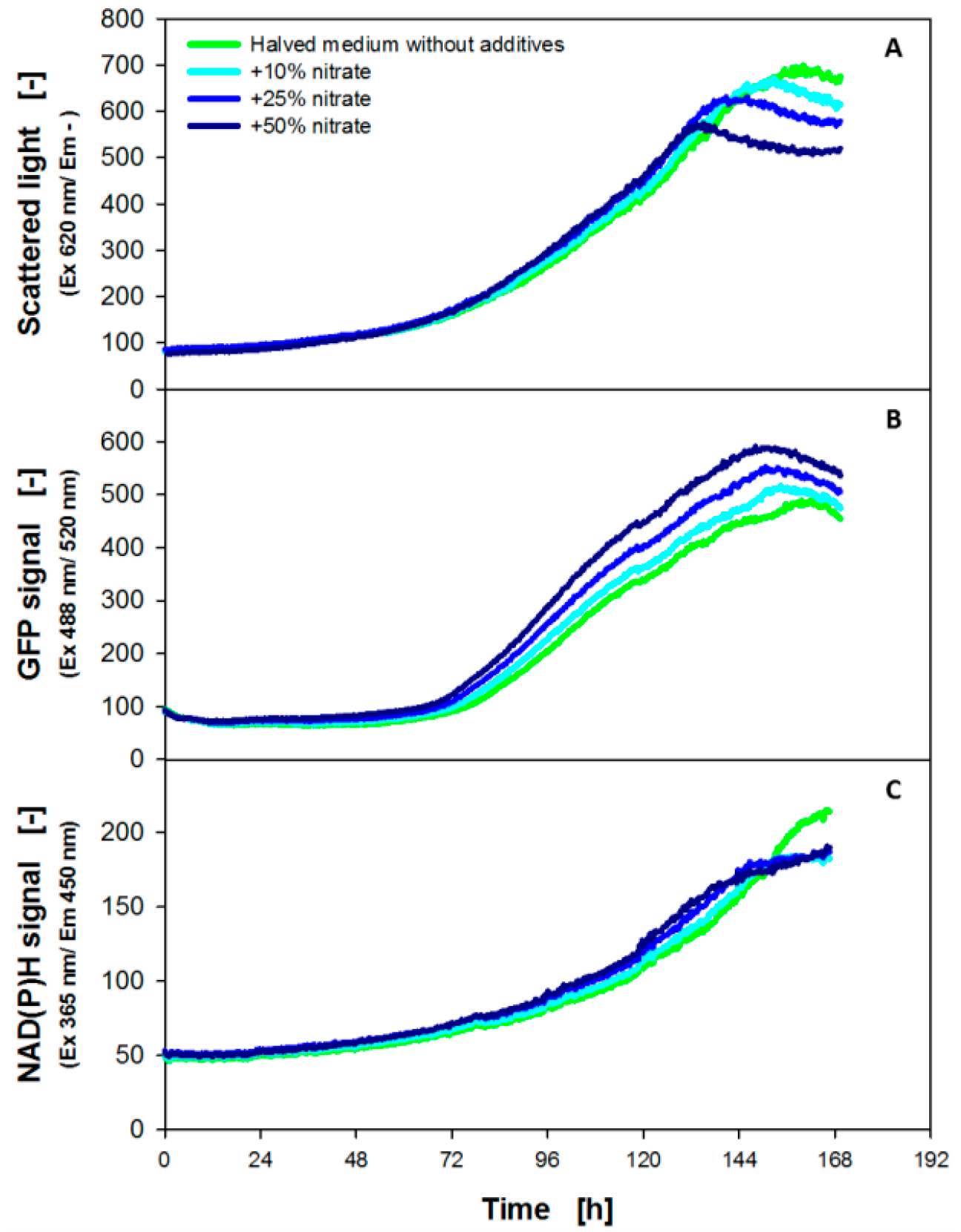 The second experiment (Figure 5) shows the influence of different ammonium concentrations. In contrast to the variation of nitrate, the levels of scattered light stay similar over the different nutrient conditions (5A). Beyond that, product formation (5B) is influenced negatively by an increasing amount of ammonium. Diagram 5C displays that the NAD(P)H signals differ only slightly after depletion of sucrose. 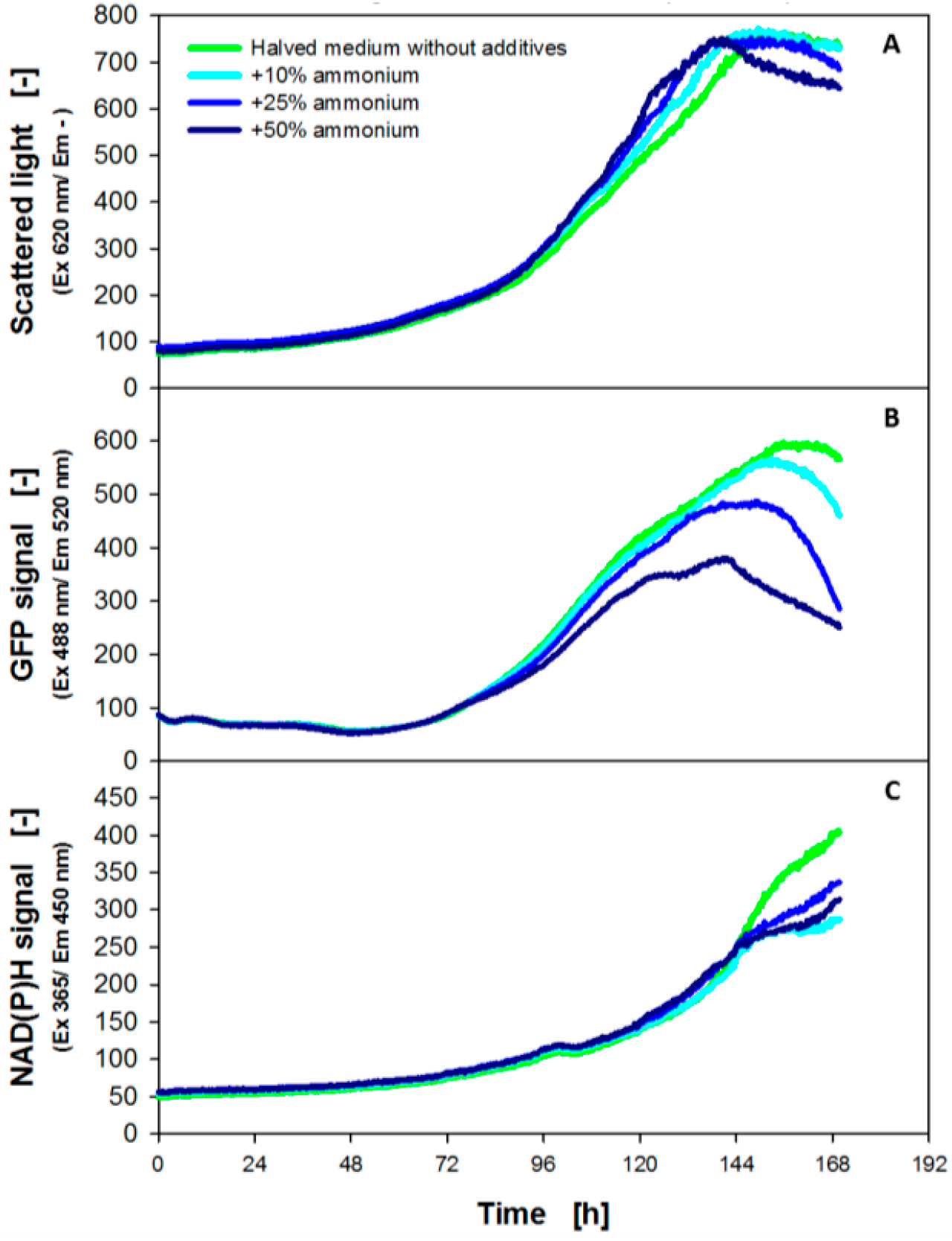 In addition to all the online monitored parameters, another very promising possibility for media and process optimization is the application of design of experiments (DoE). Indeed, DoE can be realized automatically with the RoboLector®, the BioLector® technology combined with a liquid handler.

For the cultivation of suspended plant cells very few convenient online-monitoring techniques in microliter scale are available. With the BioLector® this gap is closed. Important bioprocess parameters can be measured online and without taking of samples. As presented in the exemplary experiments, biomass concentration, fluorescence of a product protein, NAD(P)H, pH value and DO were monitored. Reproducibility, validity and the added value of the online signals were demonstrated. Hence, improving cultivation process conditions is achievable easily as well as media optimization regarding product concentration. Moreover, it is possible to apply DoE methods in an automated fashion by a RoboLector® device.