Adaptive Laboratory Evolution of Pseudomonas putida in the RoboLector

Evolutionary Engineering is used in biotechnology to improve characteristics of production strains, especially if the underlying mechanisms are not yet fully understood, and thus complements metabolic engineering [1] . Adaptive laboratory evolution (ALE) has become a powerful tool in biotechnology, especially for untargeted strain optimization [2] , e.g., for improved biomass yields and ultimately reducing costs in industrial settings [3] . Furthermore, when combined with highthroughput DNA sequencing, ALE can be used to reveal molecular processes: Li et al. (2019) were able to shed light on the ethylene glycol metabolism in P. putida using ALE [4] .

In microbial ALE experiments, microorganisms are grown under well-defined conditions for longer periods in the range of days and weeks and in academia up to years to allow a selection of improved phenotypic changes. Microorganisms are often suited to ALE studies because (a) they have simple nutrient necessities, (b) many microbes can be easily cultivated in the laboratory, and (c) in general have a low doubling time allowing for growth of numerous hundred generations in a relatively short time frame [5] . The key principle of ALE is the application of a selection pressure to the culture [2] . Parameters like max growth rate μmax, survival rates in toxic concentrations of certain chemical compounds, and absolute biomass yield serve as suitable fitness criteria [5] . In the majority of cases the criterion of choice is an increased growth rate or even a shortened lag phase, as those cells are inherently predominant in the culture. Routinely, ALE experiments are performed in shake flasks or laboratory bioreactors either in continuous cultivation or repetitive batch mode. Nevertheless, due to long experimentation times and numerous manual handling steps these approaches are laborious and prone to errors. [2] An automation of the process not only facilitates the whole experiment but also allows the execution of biological replicates [6]

The RoboLector as a microbial cultivation system is the ideal tool for automated and high-throughput ALE processes. Time-consuming experiments, set up manually in shake flasks, can be avoided. Both the manual and the automated ALE are illustrated in figure 1.

Schematic illustration of manually pipetted sequential batch cultivations in shake flasks with the course of the optical density during cultivation (A), automated repetitive batch cultivation in a 48-well microtiter plate (MTP, e.g., FlowerPlate or Round Well Plate) using the RoboLector (B).

In this application note we demonstrate a RoboLector supported laboratory evolution experiment of Pseudomonas putida KT2440 wildtype (WT) in order to improve growth on acetate as sole energy and carbon source in the cultivation medium.

P. putida KT2440 is a rod-shaped bacterium, which exhibits a noteworthy potential to be used in industrial processes for the production of valuable compounds and already is a model laboratory species [7, 8, 9] . The Gram-negative bacterium can be used to produce aromatics, glycolipids, biopolymers, acids, and alcohols, among many other compounds [9, 10] . The organism can metabolize a large variety of substrates, including sugars, alcohols, organic acids, fatty acids, amino acids, and aromatics [11] .

An interesting substrate for the production of value-added compounds is acetate, a small organic acid, since it is cheap and not competing with the food industry [12] . It is present in biomass hydrolysates and common waste streams but can also be produced from CO2 [13, 14] . Although P. putida can naturally metabolize acetate [15] , growth on the C2-compound is characterized by a prolonged lag-phase and a low growth rate [16] , which is suboptimal for biotechnological processes.

Standard cultivation of Pseudomonas putida in the BioLector: P. putida KT2440 wild type (WT) was cultivated in the 48-well Round Well Plate at 30 °C and 1,000 rpm. The filling volume in each cultivation well was set to 1,500 µL. The mineral salt medium (MSM) was supplemented with 8 g/L acetate. Biomass signal (scattered light) [a.u.], pH [-], and dissolved oxygen [%] were measured online.

Manual ALE in Growth Profiler®: The first ALE attempt to improve growth behaviour of P. putida on acetate was performed manually in 24-deep-well plates (SystemDuetz; Enzyscreen B.V., Heemstede, The Netherlands). For this purpose, two precultures were set up. For the first preculture, lysogeny broth (LB) medium was inoculated with a cryoculture of P. putida KT2440 WT and was incubated overnight at 30°C. From this culture a second preculture was set up in MSM + 5 g/L acetate and was incubated overnight at 30°C. Finally, for the manual ALE experiment 12 mL of MSM + 8 g/L acetate were inoculated with the second preculture and then split into 8 wells (#1- #8) of a 24-deep-well plate with a filling volume of 1.5 mL per well. The cultivation took place at 225 rpm and 30°C. Every 12 hours culture broth was transferred manually into fresh MSM + 8 g/L acetate. After this ALE run cryocultures were prepared for each of the eight approaches from this attempt in order to use them in further ALE experiments in the RoboLector XL.

Automated ALE in the RoboLector XL-8: On each 48-well Round Well Plate eight cultures #1 - #8 were performed simultaneously in 8 columns of the MTP. Previously, two preculture runs were set up for each of the eight cultures originating from the manual ALE. For the first preculture, 10 mL LB medium was inoculated and incubated overnight at 30°C. The second preculture was set up in MSM + 5 g/L acetate and was incubated overnight at 30°C. Finally, the eight wells A01 – A08 were inoculated on a Round Well Plate in MSM + 8 g/L acetate. A biomass signal of 300 a.u. corresponds to OD = 1.5 (determined from a previously performed calibration experiment) and served as a trigger to inoculate a new well in the next row on the Round Well Plate. The scattered light signals and the correspondent optical density values are shown in figure 2.

All wells to be inoculated were previously prepared with 1,450 µL MSM including 8 g/L acetate. The MTP is sealed with the sterile gas permeable sealing foil with evaporation reduction and perforated silicone layer (F-GPRS48-10) and placed into the incubation chamber of the BioLector.

Figure 2: Biomass calibration in the BioLector. In previous experiments scattered light signals (A) were determined and calibrated optical density, OD600 (B) were calculated. Both are plotted against the cultivation time.

All inoculation steps were done automatically by the RoboLector XL-8. In each step the well was inoculated with 50 µL culture broth from the well above by the washable pipetting tip of the RoboLector as presented in figure 3.

Figure 3: Pipetting step of the RoboLector. After the trigger condition is met, the inoculation is done automatically.

Experiment layout design: The general layout on the MTP is outlined in figure 4. The pipetting steps were repeated until all wells in row F were inoculated.

Figure 4: General MTP Layout for the ALE in the RoboLector. Eight culture approaches (colonies #1-#8) were prepared column-wise from well A01 to A08. After the trigger condition of 300 a.u. was met, the well in the next row was inoculated automatically by the RoboLector.

An MTP change takes place and row A of a new MTP was inoculated with 50 µL culture broth from those wells in row F manually. Then the automated ALE in the RoboLector was continued until row F has been inoculated. In figure 5 the process is illustrated schematically.

Figure 5: Handling process of changing the MTP during the ALE process. After all pipetting steps on the MTP have been completed, row A of a new MTP must be inoculated. If the RoboLector is located in a sterile hood, the inoculation step can be performed automatically on the worktable by the RoboLector. A fresh F-GPRS48-10 foil is then applied to the MTP. To continue the ALE process, the MTP is now placed in the incubation chamber of the BioLector.

The activation trigger for the pipetting process was set to > 300 a.u., presented as a gray dotted line. Once the trigger condition was met, the RoboLector transferred 50 µL into the next culture well on the Round Well Plate in the next measurement cycle (e.g., from well A08 to B08 as shown in figure 6). For each culture (#1 - #8) up to six batch cultivations were performed on one Round Well Plate. For example, a total of 16 sequential batch cultivations of all eight cultures were performed on three microtiter plates as presented in figure 7. 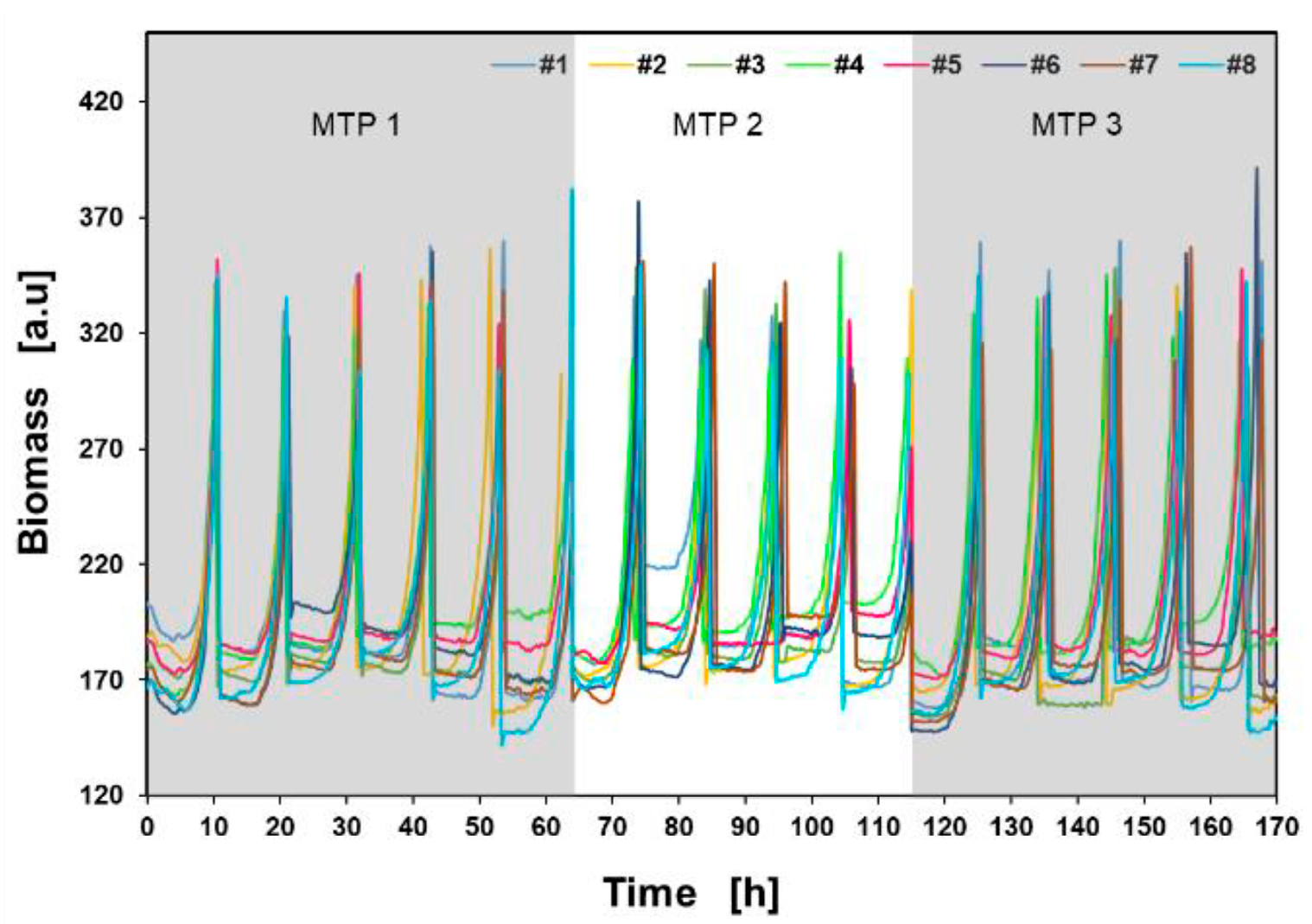 Figure 7: Sequential biomass measurement of all colonies on the initial three MTPs.

Colony screening: The whole ALE experiment is shown in figure 8.

Four of the eight cultures (#2, #4, #5 and #8) are plotted against the cultivation time. Online measurements of biomass, pH, and dissolved oxygen were performed. The course of the pH can also be monitored during the entire ALE-process. Here, an exponential increase of the pH-value is visible during the individual batches, which can be explained by the growth coupled metabolism of the acetate in the medium. The inoculation time point was set exactly within the exponential phase, which is indicated by the dissolved oxygen values that are 0% during the exponential phase of each batch cultivation.

Overall, the RoboLector can be used as a highly effective cultivation system for ALE experiments as we can show sequential batch cultivations during a total cultivation time of 18.5 days.

Evaluation of lag phases: By determination and comparison of lag phases before and after the RoboLector-ALE, the effectiveness of the ALE can be verified. As an example, the positive effect in the growth behavior of P. putida strain #2 was determined in detail. As presented in Figure 9, the growth behavior of P. putida KT2440 WT (WT, grey line) was compared to culture #2 after the manual ALE and thus before the RoboLector-ALE (#2 manual ALE, blue line) and after (#2 RoboLectorALE, light green line) the ALE experiment in the RoboLector. 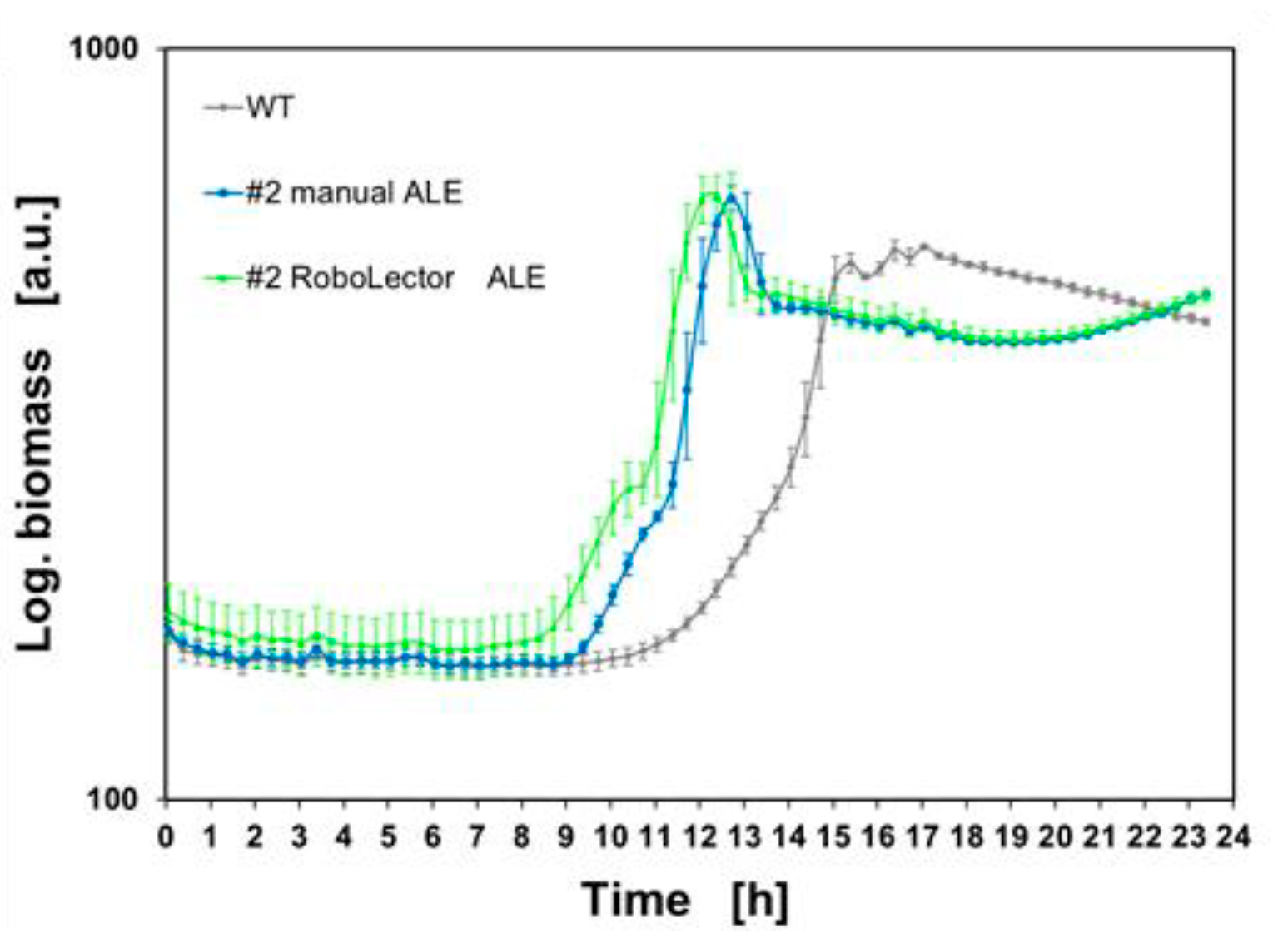 It is shown that the lag phase has been further reduced by the RoboLector-ALE. Figure 10 shows the individual growth curves on an enlarged scale for the cultivation period between 6 and 10 hours.

Figure 10 Comparison of the individual lag times. Mean values of biomass signals (biological triplicates) of P. putida KT2440 WT (grey line), #2 after the manual ALE (blue line), and after the RoboLector-ALE (light green) for the cultivation period between 6 and 10 hours. Red-dotted line indicates the end-point of lag-time.

This application note demonstrates a successful ALE experiment for Pseudomonas putida performed with the RoboLector. It is shown that the RoboLector is a suitable cultivation system and an ideal tool for the easy performance of high-throughput ALE where time consuming steps like manual pipetting steps can be avoided. We validated the ALE application in the RoboLector by the successful reduction of the lag-phase determined by online colony screening.