Microtiter plates (MTP) have become an attractive platform to culture cells in parallel and small scale speeding up bioprocess development. Because bioprocesses ranging from bench to production scale are commonly operated in fed-batch mode, it is desirable to perform cultivations in the microliter scale also in fed-batch mode to obtain data of high process relevance. Up to now, performing fed-batch cultivations in microtiter plates were difficult to realize and thus, mismatching cultivation modes were tolerated. 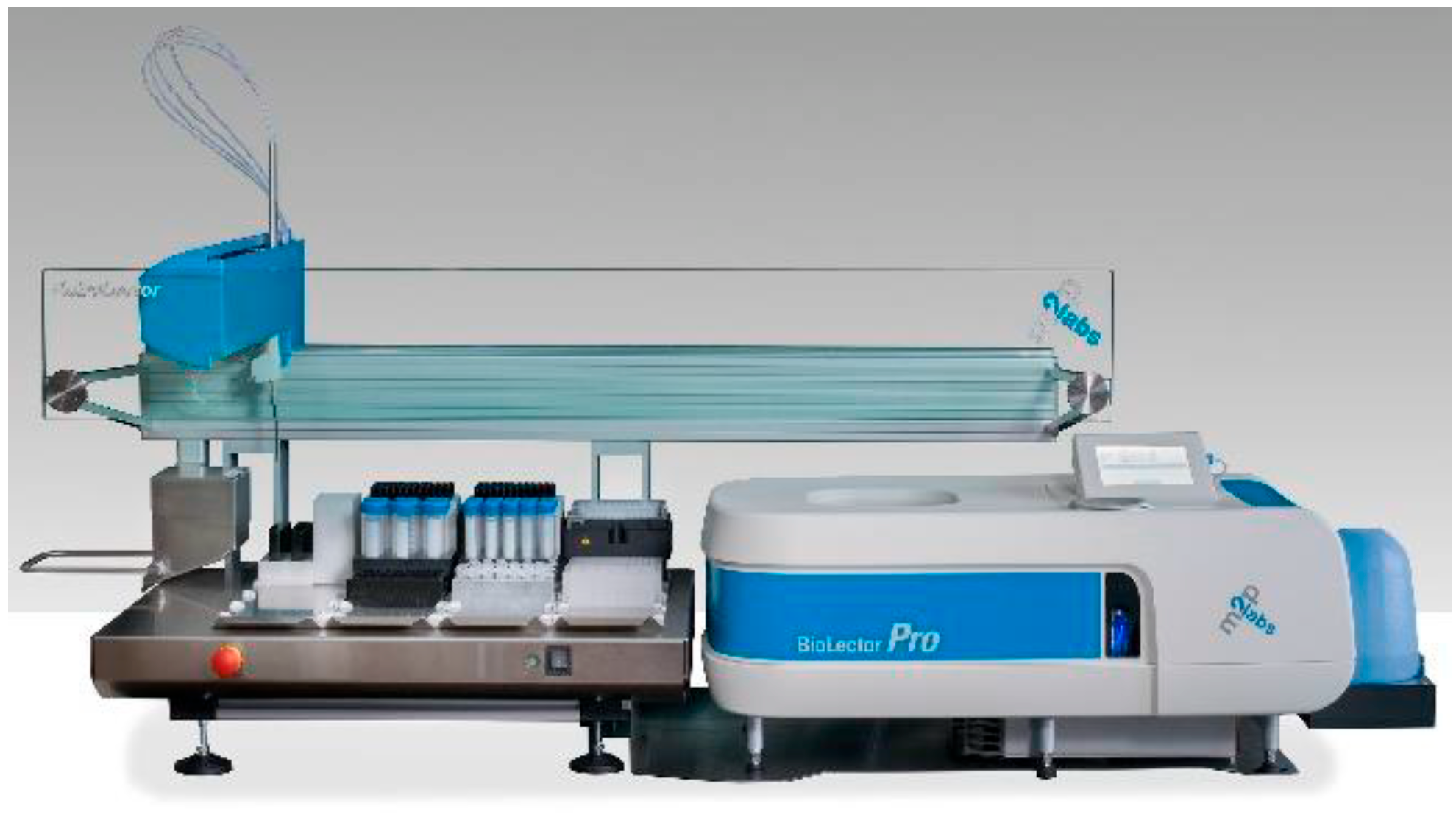 With the RoboLector® system it is now possible to perform up to 48 individually controlled fed-batch cultivations at the same time. The RoboLector® system consists of a BioLector® device integrated in a liquid handling robot. Based on online recorded cultivation data within the BioLector® like biomass, pH-value, dissolved oxygen (DO) or concentrations of fluorescent proteins or metabolites (e.g. dsRed, NAD(P)H, riboflavins), the liquid handling robot can carry out pre-defined transfer actions for each of the 48 cultivations running in parallel in the BioLector®. These robotic manipulations include sampling and addition of liquids like inducers or nutrients. Thus, by using the RoboLector®, researchers are able to design complex bioprocesses which are conducted in an automated and unattended way.

This application note presents a detailed description of the computational control to realize DO-triggered fed-batch cultivations. Finally, data obtained from a P. pastoris DO-triggered fedbatch fermentation run is shown to illustrate the theoretical explanations on the RoboLector®.

Fed-batch operation is realized by repeated dosing of nutrient solution during the cultivation run. Each single action is explained in the following (Figure 2): Aspirate: A defined amount of nutrient solution is aspirated into the robotic tip. Dosing: The aspirated volume is released by the robotic tip into the well of the MTP. The dosing action can be performed during the orbital shaking of the microtiter plate inside of the BioLector®. Flushing: The tip is moved to the wash station where it is cleaned in an appropriate way to remove any remaining nutrients. 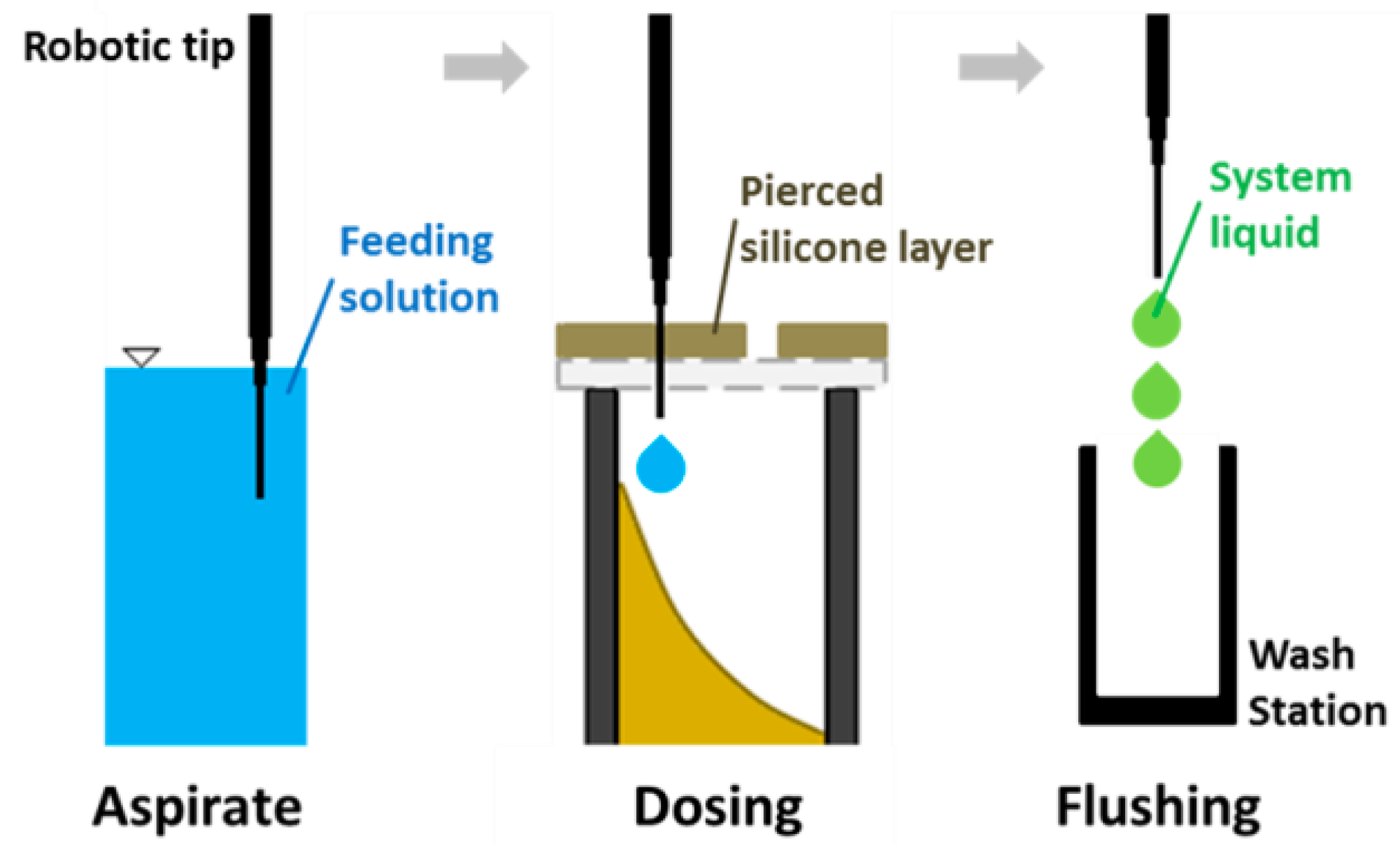 The microtiter plate is covered with a specialized membrane. The membrane consist of three layers: a 2 mm silicone mat, a non-gas permeable bonding sheet with venting holes and a nonwoven layer for maintaining sterility. The membrane can be penetrated by the robotic tip and due to the elasticity and thickness of the silicone material, it will re-seal after the tip is pulled out. 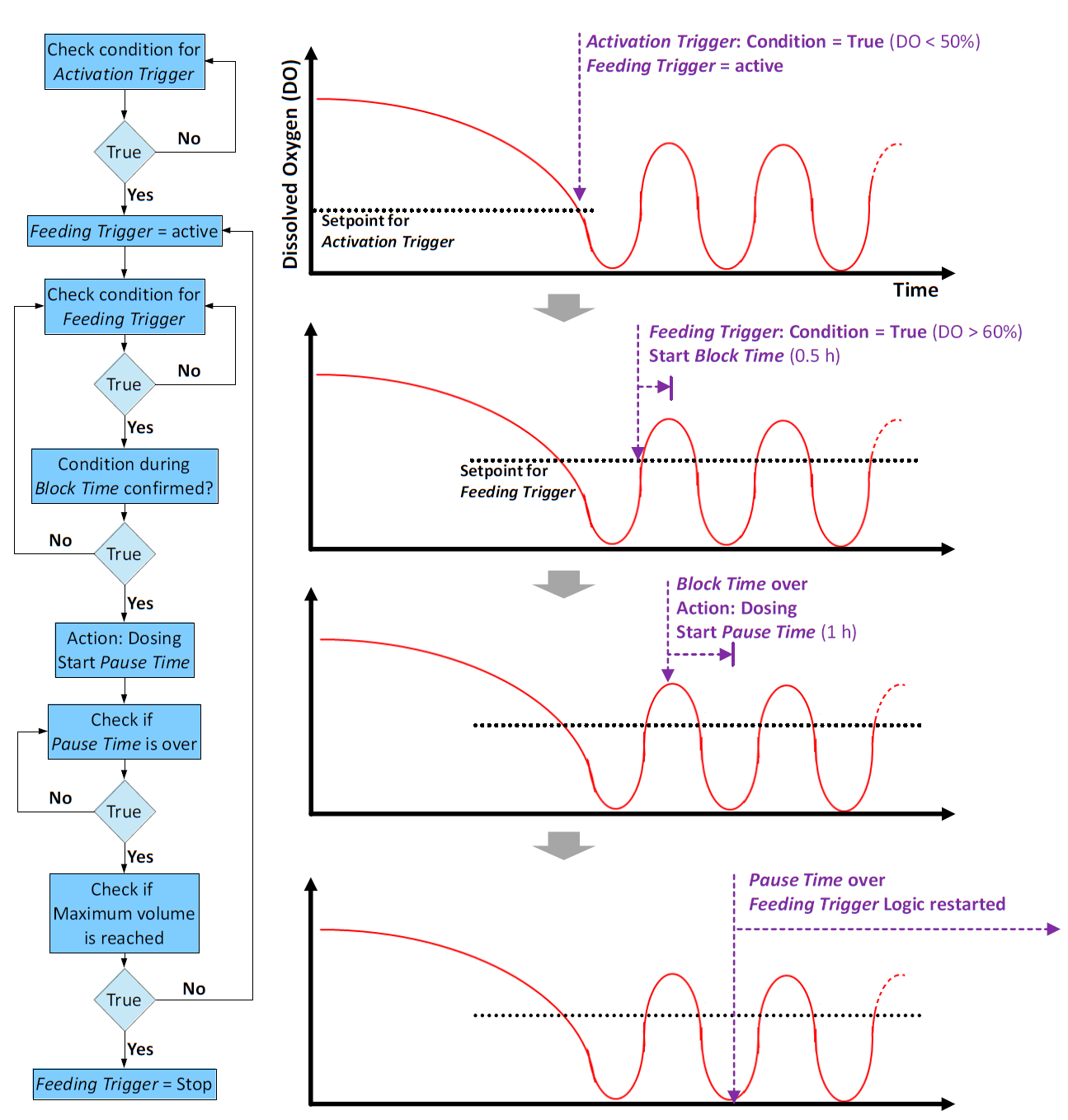 Figure 3: Flow scheme of RoboLector® controlling logic for DO-triggered dosing and corresponding cascade of triggered actions over time. Example values for the settings are given in parentheses in the right part of the figure.

For realization of DO-triggered fed-batch cultivations, several settings have to be defined for a proper performance of the controlling logic. This is explained in Figure 3, where the flow scheme is visualized with a typical time course of the signal of the dissolved oxygen concentration during DO-triggered fed-batch cultivation. The automated dosing of nutrients can be based on the online recorded signals of DO measurements.

A brief summary of the workflow how to perform a cultivation is given in Figure 4. The specific values for the triggers are to be set within the RoboLector® Agent software and are explained in detail in the RoboLector® manual. 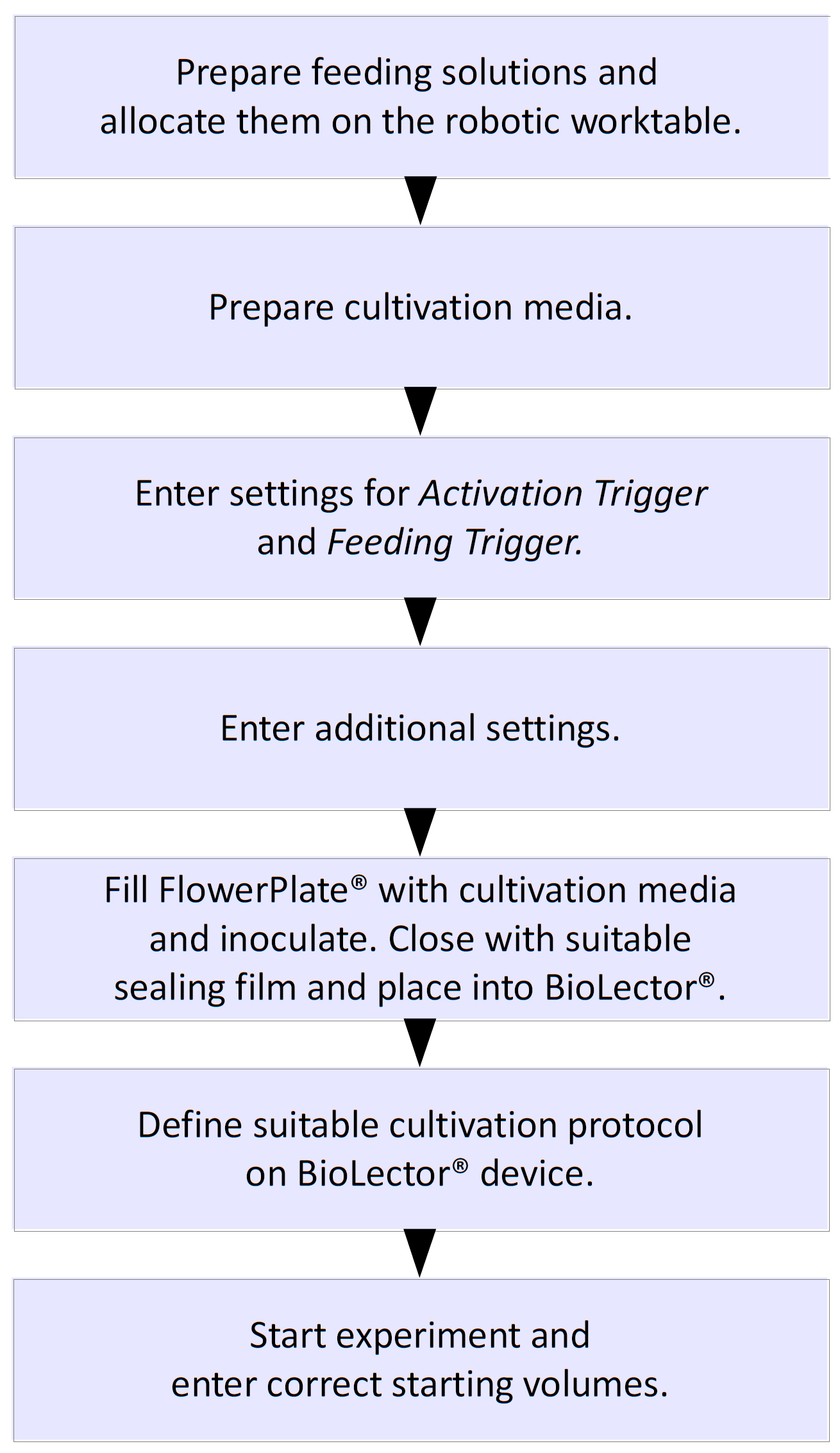 After the cultivation run, a csv-file is generated containing all measurement data and liquid handling actions. This csv-file can be loaded into BioLection® software and from there transformed into a spreadsheet compatible with MS Excel for further processing. The graph in Figure 5 shows the cultivation data of two Pichia pastoris fermentations: DO-triggered fed-batch cultivation carried out in duplicate, dosing solution was a mixture of glycerol (333 g/L) and NH4OH (1 % w/w), dosing volume was set to 15 µL (FlowerPlate®, T = 28 °C, V0 = 800 µL, Vmax = 1200 µL, n = 1100 rpm, d0 = 3 mm.). 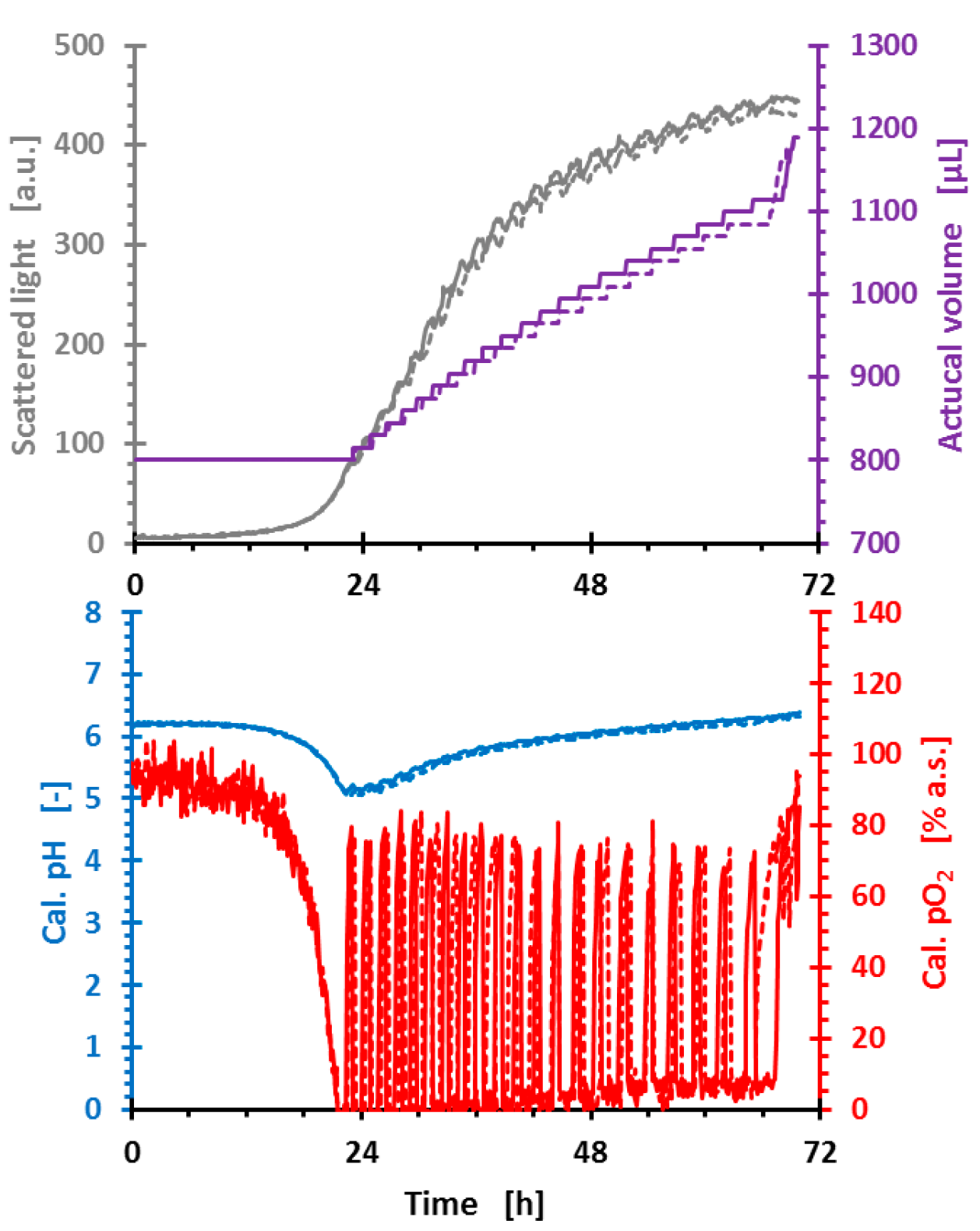 In the upper part of Figure 5 the two replicates of scattered light (proportional to biomass concentration) and the actual volume are plotted, in the lower part of Figure 5 the time courses of pH value and DO value are shown. In the cultivation media 20 g/L glycerol were added for realization of an initial batch growth resulting in decreasing DO slope for the first 24 h. The initial batch phase with dropdown of the DO value is needed for proper performance of the Activation Trigger. As can be seen, from 24 h to 72 h, DO-triggered feeding is conducted according to the aforementioned description of controlling logic. The NH4OH in the feeding solution acts both as nitrogen source and for adjustment of pH value.

Therefore, unfavorable pH values of the fermentation broth are prevented. Throughout the entire cultivation run, the RoboLector® system was operated automated and unattended.
Additionally, the superposed graphical data of the two replicates demonstrate the excellent reproducibility and reliability of the controlling mechanism.

With the RoboLector® system, up to 48 parallel fed-batch fermentations in microliter scale can be carried out in parallel with the capability to monitor relevant cultivation parameters online. These monitored parameters can be exploited to trigger liquid handling operations, e.g. repeated dosing of nutrient and thus, mimicking a fed-batch cultivation at microliter scale. The given example of DO-triggered fed-batch fermentation of P. pastoris proves the applied controlling logic. Fermentation kinetics resulting from the P. pastoris cultivations demonstrated an excellent reliability and reproducible behavior of the RoboLector® system yielding synchronous time courses of biomass concentration, volume increase, pH value and DO level of the two replicates. In consequence, the RoboLector® is the cultivation platform of choice when intense and fast knowledge acquisition is needed for definition of the design space for scalable bioprocesses.