An Analytical Revolution: Introducing the Next Generation Optima AUC 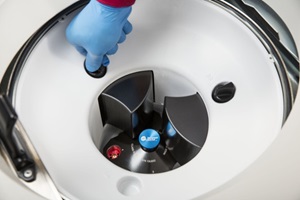 The Optima AUC is the latest innovation from Beckman Coulter and offers significant advantages as an analytical ultracentrifugation platform over the predecessor ProteomeLab.Besides the plethora of advancements in user experience on the new platform, the Optima AUC’s optical, thermal, and drive systems have also been upgraded significantly, creating an overall better experience to the end-user in terms of data quality and ease of use.A battery of applications from proteins and nanomaterialsto viral vectors and lipid-based nanoparticles have already been assayed on the new instrument and the results are very positive in terms of data quality, reproducibility, and capabilities, especially in the case of multi-wavelength experiments. Here, insights are provided to highlight the advantages of the new instrument as well as proof-of-concept data on the aforementioned applications.

Fig. 1demonstrates the increased scan frequency and radial resolution on the Optima AUC. At nearly 5 times the scan frequency and 3 times the number of radial data points, the Optima AUC generates nearly 15 times more data than the predecessor ProteomeLab, which lends to better fits and lower root mean square deviation. In Fig. 2A, a c(s) plot generated through SEDFIT demonstrates the equivalency of data between a ProteomeLaband Optima AUC for the BSA monomer peak and higher resolution between the dimer and trimer. The small shift to the right for dimer BSA in the ProteomeLabindicates an inability to distinguish higher order species at 1.5 mg/mL, whereas the Optima AUC, due to increased signal:noiseratio, is able to distinguish between the two species. Fig. 2Bexhibits comparability between absorbance and interference systems for the Optima AUC. Finally, a dilution assay of BSA was employed, replicated 5 times in each instrument, and a c(s) plot was integrated for fractional content. Across the 7-fold dilution series, the Optima AUC generated a very linear response compared to the ProteomeLabfor the fractional content of each stoichiometry of BSA (Fig. 3A). The results indicate superior sensitivity on this Optima AUC. Additionally, the reproducibility between runs was determined to be improved in the new instrument as standard deviation between runs was lower for each stoichiometry (Fig. 3B).

A plethora of new applications are possible with the Optima AUC’s faster scan rate, radial resolution, and multi-wavelength capability. On the left, cytochrome c, a heme-containing mitochondrial oxidase, was sedimentedwith 60 bpdsDNAand analyzed at a total of 50 separate wavelengths in a single cell/experiment. Using deconvolutionanalysis on the signal from each wavelength, a molar ratio, or stoichiometry of interacting species, of the protein and DNA component can be attained. On the right, NIST standard reference material #8011, a 10 nm gold nanoparticle, was characterized for sedimentation coefficient. Previously characterized by NIST using a variety of techniques such as AFM, SEM, TEM, DLS, and SAXS for particle size, an Optima AUC was employed to determine frictional ratio, sedimentation coefficient, and equivalency to other methods. Performed in solution buffer and scanning exclusively at 517 nm, the rapid absorbance system was able to collect a sufficient number of scans at 5000 rpm to properly characterize the heavy nanoparticle.

Optima Analytical Ultracentrifuges are not intended or validated for use in the diagnosis of disease or other conditions.