Escherichia coli (E. coli) is a facultative anaerobic bacterium that lives in the lower intestine of warmblooded animals, including humans.1 E. coli can be cultured easily and inexpensively in a laboratory setting and has become an important model organism in genetics, microbiology and biotechnology.1,2 E. coli is the most common organism used for the large-scale production of therapeutic proteins. Indeed, 30% of approved therapeutic proteins are currently being produced using E. coli.2 This application note will demonstrate how the BioLector microbioreactor and the Multisizer 4e Coulter Counter can be used to optimize E. coli culture conditions and characterize cell growth (Figure 1).

FIGURE 1: The BioLector microbioreactor and the Multisizer 4e Coulter Counter can be used to monitor E. coli cultures.

The BioLector microbioreactor is small-scale, automated system that enables high-throughput screening, cultivation parameter monitoring (e.g., pH, biomass, oxygen saturation, shaking speed, and fluorescence intensity) and feeding strategy optimization. Importantly, all these parameters are monitored online without the necessity to stop shaking, or to take samples. In this example, the BioLector instrument was used to determine the optimal feeding strategy for E. coli fed-batch cultures.

Cultivations of E. coli (BL21 wild type) were carried out in BioLector microbioreactor using the microfluidic 32- well FlowerPlate microtiter plate M2P-MTP-MF32-BOH1. This plate is equipped with two standard optodes for the optical online monitoring of the pH (range 5-7) and dissolved oxygen (DO). A preculture in terrific broth (TB) medium was prepared (initial optical density = 0.1) at 37 °C in a 250 mL shake flask at 250 rpm for 6 hours. In addition, two master mixtures of Wilms MOPS minimal medium with 20 g/L glucose and 10 g/L glycerol were used for the main culture in the microbioreactor (initial optical density = 0.1). The culture volume in the microtiter plate was 800-1200 μL per well. The plate was shaken at 1200 rpm at 37 °C, the humidity level was set at 75 %. The pH-adjusting agent used was 3 M NaOH. The feeding solution was composed of 10 mL glycerol solution (500 g/L glycerol) and 2 mL of nitrogen source (250 g/L (NH4)2SO4, 25 g/L NH4Cl). Two different feeding strategies were used: DO-triggered feed and constant feed. In the DO-triggered feed protocol, the MTP was set to deliver a pulse of 4 μL of the feeding solution when the DO dropped below 30 % for the first time for activation, and then whenever the DO was above 70 % during the cultivation process. In the constant feed protocol, the MTP was set to deliver 3 μL/h of the feeding solution during the cultivation process. 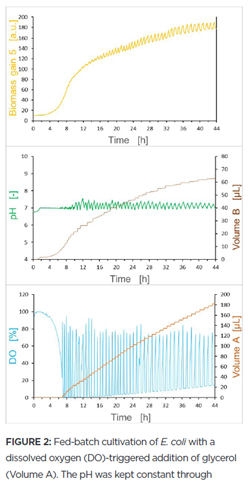 Overall, the results showed that at the beginning of the cultivation, the cell number was low and thus the DO was approximately 100 %. Next, oxygen consumption increased together with cell proliferation, and, consequently, DO levels dropped. The stationary phase started at about 7 hours. When the DO dropped below 30 % for the first time, the system delivered a pulse of 4 μL of the feeding solution for activation. During this phase a slow culture growth rate was observed, which correlated with low oxygen consumption and the consequent rapid increase of the DO. Next, when the DO reached 70 % a new feed pulse was delivered, and, consequently, the growth rate increased again. This cycle was repeated throughout experiment. Therefore, the feed curve showed a step-like increase dependent on the DO fluctuations, whose impact was also observed in the biomass signal. Due to the ongoing addition of glycerol, and the correlated bacterial growth, the culture produced acetate. This led to a growth-dependent drop in the pH value (Figure 2, middle chart). Hence, the volume of the pH-adjusting agent (Volume B in Figure 2) increased according to the culture growth. 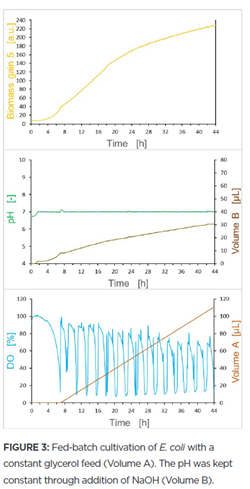 Figure 3 shows the same variables measured when the culture received a constant glycerol feed (3 μL/h) once the culture reached the stationary phase (at about 7 hours). The constant feeding protocol led to fewer fluctuations in the DO level than the DO-triggered pulse feed protocol. In consequence, both the culture growth and the pH value also showed fewer fluctuations. It can be concluded that the biomass growth behaved differently depending on the feeding strategy. The final biomass gain was higher when the feeding protocol was constant, even when the culture received a smaller total volume of feeding solution. Moreover, since the constant feed protocol led to almost no fluctuations in the pH level, a smaller total volume of the pH-adjusting agent was required. Thus, a constant feed can be recommended to optimize E. coli cultures.

In conclusion, the BioLector microbioreactor is ideally suited for microbial fed-batch cultivation processes and can be used to optimize bacterial culture conditions. Up to 32 pH-controlled fed-batch cultivations can be performed in one experiment at the same time. Continuous shaking during measurements ensures continuous mass transfer and homogenization of the suspended cells. The BioLector microbioreactor not only allows the online measurement of biomass, pH and dissolved oxygen but also the signal-dependent regulation of the pH value and feeding of nutrient solutions.

Previous studies have shown the efficacy of the BioLector microbioreactor to screen optimal E. coli culture conditions prior to scale-up.3,4,5 In summary, the system enables the evaluation and discrimination of different cultures improving screening conditions, process development and scale-up procedures.

Cell size is a key parameter used to gain insights into the diversity of cellular mechanisms (e.g., cell cycle, osmotic regulation, cell death, pathogenesis, phagocytosis, species diversity, etc.). The Multisizer 4e instrument uses the Coulter method to detect particles from 200 nm to 1,600 μm regardless of the particle’s nature or optical properties. Particles suspended in a 0.9% electrolyte solution are drawn through a small cylindrical aperture. Two submerged electrodes located on each side of the aperture create an electric current. As each particle passes through the aperture, it displaces its own volume of conducting liquid, momentarily increasing the impedance of the aperture. This produces a voltage pulse that is proportional to the volume of the particle. The number of electrical pulses indicates particle count, while the amplitude of the electrical pulse produced depends on the particle’s volume.6 In the following example, the Multisizer 4e instrument was used to characterize cell sizes in a E. coli culture.

A sample of the E. coli culture was pre-diluted 1:1000 with Isoton 2 in a 10 mL Accuvete ST. From this dilution, 50 μL was used for each measurement. The aperture used was 20 μm and each measurement lasted 36 seconds. The complete list of settings is shown in Table 1. The generated data were processed using Digital Pulse Processing (DPP) technology. DPP enables the acquisition, storage and display of each individual pulse. This means that individual areas of the pulse spectrum can be evaluated separately at a later date.

The DPP data of the experiment indicates that the size of the E. coli size in this culture ranged between 0.4 to 2.2 μm (Figure 4).

From this raw data it is possible to select a range of interest (dotted lines in figure 4) and create different frequency histograms (i.e. the number of cells for each volume). For example, figure 5 shows the resulting histogram if a range between 0.8 and 1.5 μm is selected. 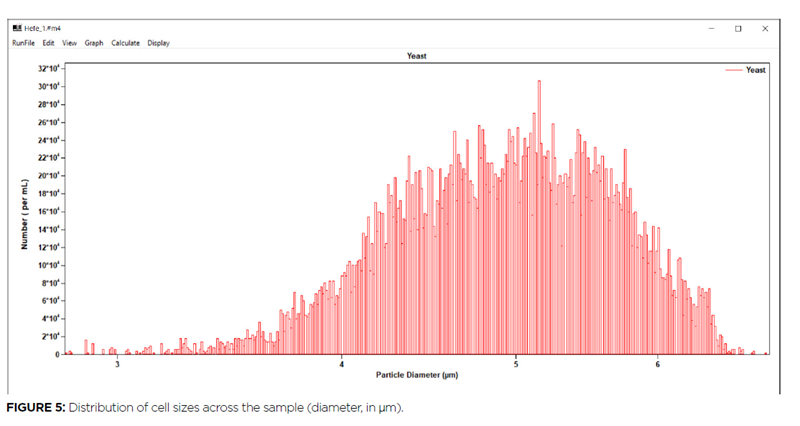 The DPP technology provides ultra-high resolution and accuracy (i.e. detection of 1 particle in 1 mL of a sample), which is unattainable using other current technologies. Thus, it can be used to accurately determine the volume, number, and cell concentration and detect real-time size changes during the cultivation process. For example, different studies used the instrument to characterize E.coli growth dynamics7 and growth fitness.8 The Multisizer instrument also has been used to investigate the growth rate dependence of cell size of E. coli cultures under different nutrient conditions. Under normal conditions, E. coli growth rate positively correlated with cell size (i.e., large cells grow faster). However, this study found that when nutrients are scarce, protein overexpression inverts this relationship and leads to large cells with a low growing rate. This finding reveals an important role of protein synthesis in cell division control in E. coli cultures.9

The BioLector microbioreactor and the Multisizer 4e instruments are bench-top devices with an intuitive user interface that can be integrated to any laboratory to optimize and monitor E. coli cultures for a broad range of applications.