Sparse matrix screens are often used as one of the first steps in protein crystallography screening. These screens consist of a variety of solutions with varying compositions, viscosities, and surface tensions. A number of commercially available screens were tested to determine if the Dynamic Fluid Analysis properties of the Echo liquid handler could transfer the reagents with a single fluid class setting. In total 480 different solutions were tested from the following screens:

30 μL of crystallography screening reagents was transferred to a 384-well polypropylene Echo qualifi ed source plate (P-05525). The source plate was then centrifuged. A nominal 30 nL volume of each reagent was transferred with the Echo liquid handler from the source plate to water-sensitive yellow paper (TeeJet Technologies, 20301-1N), which turns blue upon contact with fluid. A blue dot on the paper in the expected location was indicative of a reagent transfer. The Echo liquid handler transfers in 2.5 nL increments, so 30 nL transfer consists of 12 drop transfers.

477/480 (>99%) of the reagents tested were transferred by the Echo liquid handler. Drop volumes appeared to be consistent; the coalescence (drop-on-drop consistency) of the transfers is apparent in Figure 1. Figure 1: Transfer of Hampton Research PEG/Ion HT to water-sensitive paper. Each blue dot corresponds to a unique transferred reagent. Each reagent was transferred in four replicates, as indicated by the box.

Crystallization trials with lysozyme and thaumatin

The Echo 555 platform was used to transfer a 1:1 ratio of protein and crystal screening reagents from the source plate to the sitting drop wells at total volumes of 50 nL and 100 nL. Protein was transferred first, followed by the screening reagents. Plates were immediately sealed and visually checked to verify drop coalescence. An additional plate was generated by manually pipetting a 1:1 ratio of protein and crystal screening reagents to a final volume of 1 μL. Plates were centrifuged for one minute at 1500 rpm and incubated at room temperature.

Figure 2: Sample 96-well crystallography plate (Swissci shown here). 96-well SBS format, with 3 drop wells per reservoir well. 10 μL of reagents was added to the reservoir wells, and then loaded into the Echo liquid handler, which dispensed reagent and protein into the drop wells.

Crystallization was observed for both proteins (Figure 4). Crystallization conditions and crystal forms were consistent between the manually-prepared plates and the Echo liquid handler-prepared plates, even at reduced volumes for the plates prepared with the Echo liquid handler. One reagent produced 3-D, cuboidal crystals with lysozyme; another produced needle cluster-type crystals. 3-D thaumatin crystals were generated with another reagent. 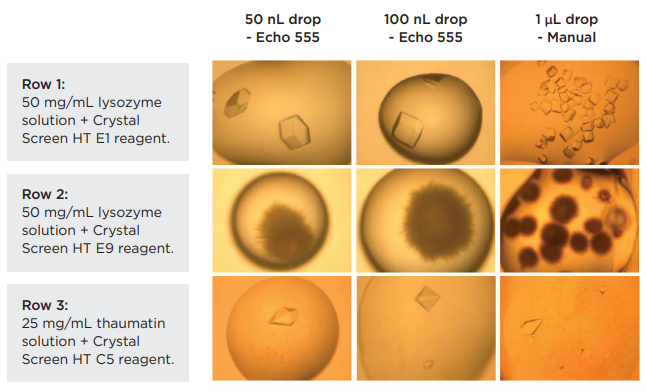 Figure 4: Comparison of protein crystals generated by the Echo liquid handler versus manually.

Trials were run in 50 nL and 100 nL drop volumes (dispensed with the Echo 555 platform), as well as 1 μL drop volumes, dispensed by hand. For the Echo plates, 10 μL of the cor-responding reagent were added to the reservoir wells; 25 μL for the manually-prepared plates. After dispensing of reagent and protein, plates were sealed and centrifuged, then incubated at room temperature.

All three methods showed good repeatability for the three different crystallization trials. In two of the cases, the 100 nL drop volume dispensed on the Echo 555 platform showed slightly higher reproducibility than the larger volume plates prepared by hand.

The transfer of high concentration stocks of various common crystallography reagent components was tested in order to determine precision of transfer with a single common fluid type.

Solutions of crystallography reagent components at different concentrations were doped with sodium fluorescein to a final concentration of 0.15 mM. Each was loaded into a 384-well Echo qualified polypropylene source plate at volumes ranging from 20-50 μL. 50 nL of each solution was transferred from the source plate with the Echo liquid handler to a destination plate (Greiner Bio-One). 50 μL of 10 mM NaOH, pH 12 solution was added. The plates were centrifuged, incubated for 30 minutes at room temperature, and then read on a BioTek Synergy H4 plate reader.

With the ability to transfer high concentration stocks of crystallography reagent components confirmed, an attempt was made to recreate crystallography conditions by the reformulation, at runtime, of the initial crystallization condition. Since the concentrated stock reagents could be transferred precisely by the Echo liquid handler, the expectation was that similar crystallization results would be observed. In this instance, Hampton Crystal Screen E9 solution (2 M sodium chloride and 0.1 M sodium acetate trihydrate, pH 4.6) was the condition recreated, which produced needle cluster crystals from 50 mg/mL lysozyme.

Wells in a 384-well Echo qualified source plate were filled with 30 μL 5 M sodium chloride, 30 μL 0.5 M sodium acetate, pH 4.6, 30 μL water, 30 μL of Crystal Screen solution E9 (2 M sodium chloride, 0.1 M sodium acetate trihydrate, pH 4.6) from Hampton (P/N HR2-912-14), and 30 μL 50 mg/mL lysozyme in 0.02 M sodium acetate trihydrate, pH 4.6 buffer. The source plate was centrifuged and placed in an Echo 555 platform which transferred 20 nL of sodium chloride, 10 nL of sodium acetate, and 20 nL of water to the sitting drop wells of half a Swissci plate (rows A-D, 48 wells) to create a solution of 2 M sodium chloride, 0.1 M sodium acetate, pH 4.6 in those wells. 50 nL of the Hampton Crystal Screen E9 reagent was then transferred to the sitting drop wells in the other half (rows E-H, 48 wells) of the same plate. 50 nL of lysozyme were then dispensed into the same wells of the whole plate. The plate was then sealed, centrifuged for 1 minute at 1500 rpm, and incubated at room temperature. The reservoir wells in the Swissci plate were pre-filled 10 μL with the E9 solution prior to the transfer step on the Echo liquid handler.

Needle cluster crystals, as seen in the initial screen (see Figure 3), were observed in 36 out of 48 of the wells with the E9 reagent. Needle clusters were also observed in 41 out of 48 of the wells containing the 2 M sodium chloride, 0.1 M sodium acetate solution made on the fly. No discernable difference could be seen between the crystals formed with the two solutions, as seen in Figure 6.

Generation of a grid screen on the Echo liquid handler

After successfully recreating a crystallography reagent on the Echo liquid handler using higher concentration component solutions, the next step was to generate a grid screen to try to obtain larger lysozyme crystals based on the starting conditions in Experiment 5.

30 μL of high concentration stocks of sodium chloride (4, 4.25, 4.5, 4.7, and 5 M), sodium acetate, pH 4.6 (2 M), and polyethylene glycol 3,350 (20% w/v) were loaded in a 384-well Echo qualified source plate, along with water and 50 mg/mL lysozyme. Each non-protein component was transferred on the Echo 555 platform in varying volumes to a fi nal volume of 50 nL, generating a matrix of different crystallography conditions (Figure 7). 50 nL of lysozyme were then transferred into the same wells. The reservoir wells of the plate were pre-filled with 10 μL of a 2 M sodium chloride, 0.1 M sodium acetate, pH 4.6, 10% w/v PEG 3,350 solution. After transfer on the Echo 555 platform, the plate was sealed, centrifuged at 1500 rpm for 1 minute, and incubated at room temperature.

Figure 7: 96-well plate map of grid screen created on the fly on the Echo liquid handler. The Echo 500 series revolutionizes liquid transfer by using acoustic energy to eject fluids. The Echo liquid handler is completely touchless—no tips or nozzles, and no material contacts the sample as it moves from source to destination. Low-volume, accurate and precise transfer at volumes of 2.5 nL and up allow for miniaturization to previously unattainable volumes. Miniaturization reduces protein and reagent consumption in crystallization trials. Dynamic Fluid Analysis allows transfer of proteins and essentially all sparse matrix screens using a single fluid class setting, which eliminates the need for multiple settings or frequent calibrations. Transfer of samples from any well of a source to any destination further minimizes sample consumption and simplifies assay setup and execution.