An Overview of HEK-239 Cell Line 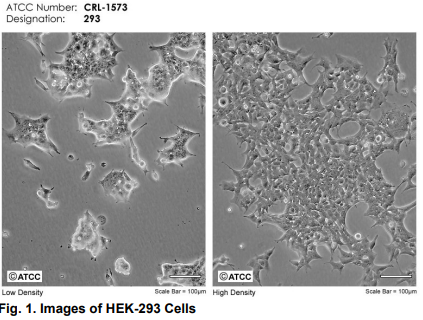 Human Embryonic Kidney (HEK) 293 is a cell line commonly used for BioPharma and Basic Medical research and therapeutic solutions. Generated in 1973, they are derived from human embryonic kidney cells and are popular, in part because of their reliable growth in culture and for their propensity for transfection. They are often utilized to produce therapeutic proteins and viruses for gene therapy.

The cells maintain somewhat of an epithelial cell morphology and they are adherent in culture. Typically, they appear less circular in morphology than other common cell lines, and they are somewhat granular. The adenovirus genes expressed in this line allow cells to produce consistently high levels of recombinant proteins. HEK-293 cells are also unusual, in that they are hypotriploid.

HEK-293 cells were generated in 1973 by transfection of normal healthy human embryonic kidney (HEK) cells with adenovirus 5 DNA by Alex Van der Eb in Leiden, Netherlands. The use of 293 refers to the experiment number referenced in his laboratory note book. There is still some debate as to cell type of origin. The original kidney cell culture that served as the source of the cell line was heterogeneous, and so evidence suggests fibroblast, endothelial or epithelial cells as possible lineages. More recently, a comprehensive study suggested that adenovirus preferentially transformed a neuronal lineage from the original culture, as this virus is much efficient at transforming neuronal cells as compared to epithelial cells. Moreover, DNA specific to neuronal cells was detected in this cell line. As such, the literature suggests that it should not be used as an in vitro model of typical kidney cells. 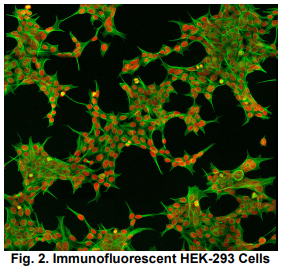 HEK-293 cells are typically less circular than other common cell lines, and they often display dendritic-like processes. They are slightly granular, and they tend to be adherent. However, recent studies argue for a neuronal lineage, due to the presence of mRNA and gene products typically found in neurons. Due to transfection by adenovirus, this cell line does display some cytogenetic instability. In approximately 60% of cultured cells, modal chromosome number is 64, and higher ploidies occur in about 4% of cells. They grow well in standard culture conditions (cRPMI at 37oC in 5% CO2), provided cell density is kept low (1-3 x 105 /mL). At these conditions, cell doubling time is about 34 hours. For most cases, it is recommended that concentrations not exceed 1 x 106 /mL. HEK-293 cultures are considered healthy when viability counts are above 85% via trypan blue exclusion.

This cell line is popular because it is straightforward to grow in culture and is easily transduced by transfection vehicles, such as adenovirus. In particular, efficiencies approaching 100% are possible by transfection via the calcium phosphate method. Besides for use in recombinant protein production, HEK-293 cells are used for propagation of adenoviral vectors, and HEK293T is an important line for propagating retroviral vectors. In fact, several retroviral packaging cell lines are based on HEK-293T cells. Other examples of experiments/applications using HEK-293 include:

Given some of the unusual characteristics, specific details pertaining to working with HEK-293 cell bear consideration, and might include:

The above parameters are for ViCell BLU. Due to differences in platform specs, parameters will likely require adjustment for the ViCell XR platform. Standards with known and certified values are critical to developing and verifying accurate and repeatable cell viability analyses. It is recommended to utilize both the concentration and the viability standards. (NOTE: When using standards, always refer to the product insert for specific values, and not the label of the box.) Bear in mind that there is no single defined or prescribed method for analyzing HEK-293 cell viability and viable cell concentrations. Moreover, variability between cell cultures as well as culture conditions suggest the need to optimize parameters for specific analytical needs.

*American Type Culture Collection (ATCC) is a nonprofit organization which collects, stores, and distributes standard reference microorganisms, cell lines and other materials for research and development. Established in 1925 to serve as a national center for depositing and distributing microbiological specimens, and is now the largest general culture collection in the world.