Deoxyribonucleic acid (DNA) was revealed as the basis for genetic inheritance within all living systems in 1944, although it wasn't until 1953 that the world was first witness to its striking physical structure: two strands joined and twisted into a double-helical spiral. The discovery revolutionized the life sciences, finally offering a springboard from which research into DNA's role in hereditary and cellular control could begin. 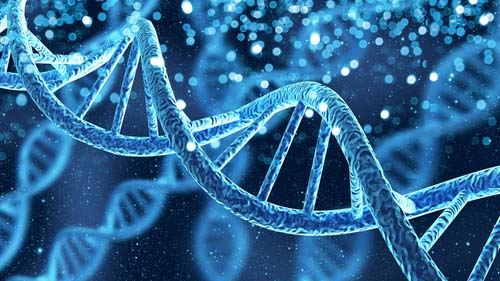 Each DNA strand was eventually shown to be a long, chainlike molecule made from a sequence of nucleotides, each consisting of a nitrogenous base unit, a pentose sugar and a phosphate group that bridges one nucleotide to another. The shapes and hydrogen bonding properties of the four nitrogenous bases on each strand dictate consistent pairing:

These pairings and their sequence along the DNA strand constitute the genetic code, as well as the rules for "semiconservative" replication when a single strand acts as the template for synthesis (via DNA polymerase enzymes) of its new counterpart. In this way, the stable inheritance of genetic traits encoded within genes is made possible.

While DNA represents the set of genetic instructions, it's RNA (ribonucleic acid) that follows them. Through the process of transcription, DNA provides the template for RNA which, in turn, is translated into actual proteins, including enzymes, that drive the mechanical workings of every cell and tissue found in living things.

In addition to their genomic DNA, many prokaryotes can contain plasmids, which are self-replicating extrachromosomal DNA structures that may, for example, confer resistance to a specific antibiotic. These plasmids—and their ability to be shared among bacterial cells—have been extensively studied, modified and used to advance the recombinant DNA technology that supports a wide spectrum of genetic research past and present.