A type of extracellular vesicle (EV), ectosomes play a critical role in enhancing cell-to-cell communication within an organism. They vary widely in size (100–1000 nm) but are always created by the same process: direct budding out of a cell’s plasma membrane, where they are then shed into the extracellular space. Other names for these entities include microparticles (used especially in the realm of platelet studies), microvesicles and shedding vesicles.

Ectosome may be the most appropriate term among these, however, for two main reasons: 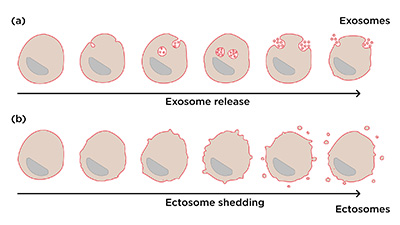 Once written off as non-essential cellular artifacts, ectosomes are now understood as the versatile tools they are: multi-purpose communication devices that allow exchange of specific properties and information among cells not in direct contact with one another.

Not only are ectosomes variable in size, but also in composition; the components (e.g., proteins, messenger-RNAs, micro-RNAs) they contain are reflective of the cell type from which they originated, and even the particular state of that cell at the time of their formation and release.

By fusing to the plasma membranes of distant target cells, ectosomes are able to, for example:

Ectosomal roles in modulating inflammation and immune responses have also been studied. Given the once-underappreciated variability and versatility of these EVs, new and complex functions are undoubtedly waiting in the discovery pipeline.