In its most elemental form, a liposome is simply a sphere-shaped vesicle consisting of one or more phospholipid bilayers. Exactly as it is with biological cell membranes, the structure of a liposome is essential for maintaining the integrity of an “inner” versus “outer” region; dual sheets of phospholipid molecules naturally align their hydrophobic regions tail-to-tail, creating both an inner and outer surface of hydrophilic heads exposed to the aqueous environments inside and outside the complete, closed liposome. 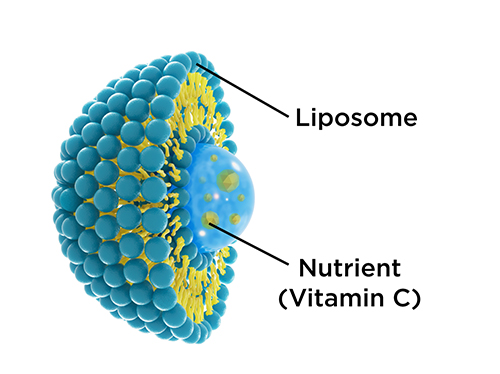 Not surprisingly, liposomes have been of keen interest to biology researchers and, in particular, pharmaceutical industry scientists nearly since their discovery in the mid-1960s. Vesicles such as these can effectively transport either aqueous or lipid drugs in vivo, and today are used extensively for this purpose. Several features of liposomes contribute to making them a useful component of modern commercial drug delivery systems:

Oral medications, dietary and nutritional supplements have long presented a challenge to developers and manufacturers due to the low absorption and bioavailability rates of traditional formulations. One major reason for this is the forbidding environment of the gastrointestinal tract; destruction and reduced efficacy of oral medications and supplements can be greatly mitigated by encapsulation within liposomes, allowing their contents to be delivered to cells and tissues with much higher efficiency.

Examples of liposome-delivered drug types (oral and non-oral) include:

In addition to pharmaceutical applications, liposomes have been used to great benefit in cosmetic products as well as in the food and farming industries, where liposome encapsulation of antimicrobials, antioxidants, flavors and bioactive elements helps protect the functionality of these compounds.

Emerging and future applications include: