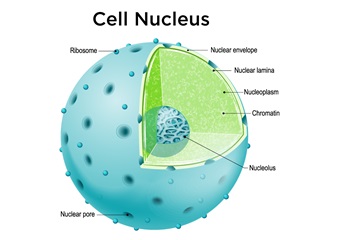 The nucleus is a membrane-enclosed organelle found in nearly all eukaryotic cell types, the most notable exception being mammalian red blood cells. As the cell's "control center" organelle, the nucleus is responsible for multiple essential functions related to its role as a storage and processing center for genetic material:

Within the nucleus, a cell's entire genomic complement exists in the form of long, linear DNA molecules wound into highly condensed chromosomes. Individual genes are transcribed into RNA templates for translation in a tightly regulated process that provides the cell and the organism with an enormous array of structural and functional proteins, from the collagen in bone to the neurotransmitters that make cognition possible.

Since the beginning of the 21st century, digital imaging techniques have ushered in new perspectives on the long-studied nucleus. Detailed 3-D visualizations now allow much clearer views into its complex interior architecture, along with features and processes associated with the nuclear membrane and its integration with surrounding structures such as the endoplasmic reticulum (ER).

More recent research continues to uncover nuclear functionality not directly related to gene storage and transcription regulation. In 2020, for example, independent research teams discovered that the nucleus itself (and not cell-membrane-level mechanisms, as expected) is responsible for sensing physical "squishing" of the cell from crowding or confinement. Pressure changes are detected by the nucleus, which in turn triggers a signal cascade that sends cells into motion toward less-confined areas for less-inhibited functioning and growth.