Classified as a type of molecular machine, ribosomes are universally present in all nucleus-containing cells, where they play a central role in the manufacture of proteins. Using strands of messenger RNA (mRNA) as a template, ribosomes are able to link amino acids together in chains that constitute the primary structure of a new protein. 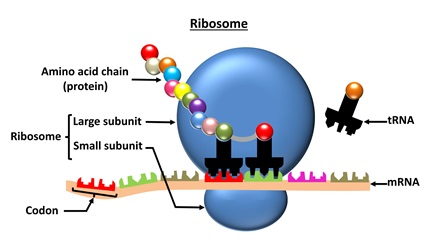 Whether it's bound to an intracellular membrane or "free floating" in cellular cytoplasm, a single ribosome is assembled from two subunits, large and small. The entire structure is described as a "ribonucleoprotein complex," i.e., consisting solely of folded ribosomal RNA (rRNA) and associated proteins.

In prokaryotic cells, the two large and small subunits, termed 50S and 30S, respectively (for their sedimentation coefficients during ultracentrifugal separation), differ not just in size, but in function:

Ribosomes in eukaryotic cells are similarly assembled from 40S and 60S subunits intertwined with their own associated proteins. The most biochemically active regions within all ribosomes, however, are remarkably conserved across kingdoms—a reflection of their dependence on structurally universal mRNA and amino acid substrates, as well as evidence for their common evolutionary origin.

The advantages of being different

Significant variations in structure and function between prokaryotic and eukaryotic ribosomes exist, nonetheless. This makes it possible to select antibiotics that specifically target bacterial ribosomes while leaving human ribosomes unharmed. Below are some common ribosome-targeting antibiotics and their mechanisms of action.

Still other research seeks to experimentally "retro-evolve" ribosomes to a hypothesized simpler, primordial form that may help answer lingering questions about the origin of protein synthesis — a concept closely linked with the origin of life itself.