Cytotoxic T cells (CTL; TC) are CD8+ T lymphocytes that kill infected, damaged, or cancerous cells. They are particularly important in the immune response against intracellular pathogens – such as replicating viruses and intracellular bacteria – which cannot be accessed by antibodies. They also play a major role in tumor surveillance, with their anticancer properties contributing to current successful cancer immunotherapies.1 Their activity occurs via several mechanisms, including the release of cytotoxic granules and the induction of apoptosis in the target cell. 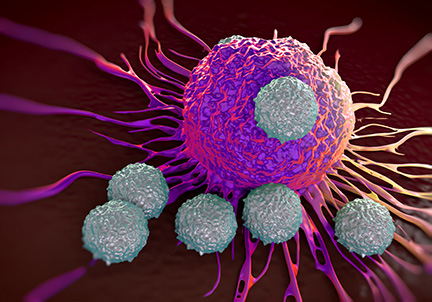 CTLs are derived from common lymphoid progenitors that are formed in the bone marrow from hematopoietic stem cells. These migrate to the thymus where they differentiate into CD8+ cells from ‘double positive’ T cells, based on their interaction with a peptide presented on MHC class I. Only cells that bind weakly to MHC-autoantigen are selected, to avoid creation of potentially autoreactive T cells.2 These CD8+ T cells mature into CTLs following activation.

CTL activation requires two signals. Firstly, the TCR interacts with the peptide-bound MHC class I molecule on the antigen-presenting cell (APC), an interaction that is stabilized by binding of CD8 to MHC. Then a co-stimulatory signal is necessary, often provided by proteins present on the surface of the APC, especially CD80 and CD86, which are recognized by the co-receptor protein CD28 on the surface of the T cell. This second signal can be assisted (or replaced) by stimulating the TC cell with cytokines released from T helper cells. Once activated, the CTL undergoes clonal expansion with the help of interleukin 2 (IL-2), which increases the number of cells specific for the target antigen.

Activated CTLs use two main mechanisms to kill infected or malignant cells. Firstly, they release cytotoxic granules containing perforin and granzymes. This ‘lethal hit’ induces apoptosis of the infected cells. The cytotoxic granules are released along the immune synapse – in the direction of the target cell – to avoid non-specific damage to surrounding tissue. TC cells are resistant to the effects of perforin and granzyme due to special characteristics of the cell membrane. The second mechanism involves the binding of CD178 (Fas ligand; FasL) on the surface of the activated CTL, to CD95 (Fas) on the target cell membrane. Ligation of Fas leads to activation of caspases, which induce apoptosis in the target cell. 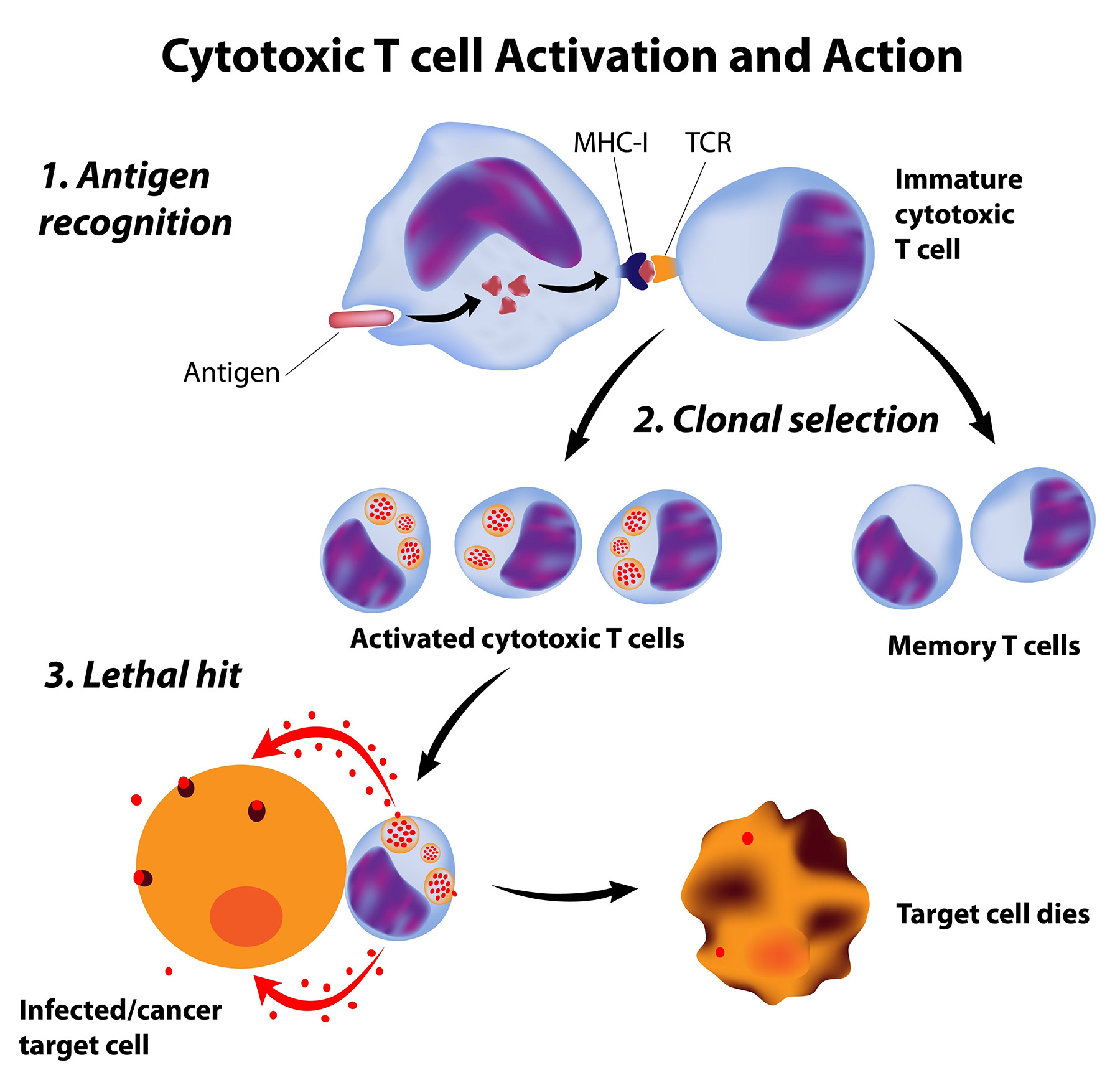 The anti-tumor effects of CTLs are a significant area of research, particularly since elevated levels of these cells in the tumor microenvironment are correlated with improved prognosis in various types of cancer.3 The use of T cells as immunotherapeutics is therefore of great interest, and the evolution of CAR-T therapy offers new opportunities in cancer treatment. CTLs have also been shown to play a role in a number of other diseases, including HIV,4 spondyloarthritis,5 and several autoimmune diseases.6 Further understanding of the role that these cells play in these disorders is important to improve understanding of their progression and treatment.

Isolation of CD8+ T cells from peripheral blood mononuclear cells or tumor tissue is important to study their phenotype and functional properties. Antibody-mediated separation techniques such as immunomagnetic selection and cell sorting are commonly used, selecting for CD8. IL-2 is a critical component of the cell culture media for CTLs as it is critical for their function, expansion, and survival.

The cytotoxic activity of CTLs can be assessed by flow cytometry by the detection of surface exposure of CD107a (“smoking gun” marker) which accompanies degranulation of perforin and granzyme B.

CD3 and CD8 are the key markers of CTLs. Since CD3 negative NK cells can also express CD8, the combination of the two markers can be used to differentiate these cell types.

Other surface markers of cytotoxic T cells include: