T cells, also known as T lymphocytes, are white blood cells that play a central role in the adaptive immune response. They can be distinguished from other lymphocytes by the presence of a T-cell receptor (TCR) on their surface. T cells originate in the bone marrow and mature in the thymus into helper, regulatory, or cytotoxic T cells, which can be differentiated by their specific expression of CD4 or CD8. They then migrate into peripheral tissues, or circulate in the blood and lymphatic system, until they are activated when they encounter their antigen. The specific role of the activated T cell in controlling or shaping the immune response is dependent on the T cell type.

T cells begin development through hematopoiesis in the bone marrow. Hematopoietic stem cells which differentiate down the lymphoid pathway become common lymphoid progenitors, further differentiating into NK cells, B cells, and T cells. During this process T cell progenitors migrate from the bone marrow to the thymus, where they are known as thymocytes, and undergo maturation through a number of distinct stages, associated with the expression of cell surface marker patterns.1 The earliest stage is the double-negative early thymic progenitor, lacking expression of both CD4 and CD8, and this population can be further sub-divided into four groups based on expression of CD25 and CD44, representing subsequent stages DN1 to DN4 of differentiation. The next major stage is the double positive – positive for both CD4 and CD8. The final stage in maturation is the single positive stage, showing expression of either CD4 or CD8, key markers for identification of the T cell subsets. The presence of either CD8 or CD4 is associated with TCRs interacting with either major histocompatibility complex (MHC) class I or class II, respectively.

Most mature T cells carry only one unique T cell receptor (TCR) (a smaller portion expresses two different TCRs2), which gives them the ability to recognize foreign antigens. The TCR is a surface protein complex that is able to bind to a specific short peptide, presented on the MHC. The TCR is associated with T cell lineage-specific CD3 and consists of two major components, the alpha and beta chains. These both contain random elements, allowing the formation of a wide variety of different TCRs. As a result, they must be tested during development to make sure they function correctly. Firstly, T cells ensure they have created a functional beta chain by testing it against a mock alpha chain. Then they attempt to create a functional alpha chain. Once a working TCR has been produced, T cells then must show their TCR can recognize the body’s MHC complex – positive selection – and that it does not react to the body’s own proteins – negative selection.3,4

T cells are activated through their TCR when they encounter their specific antigen, presented in the respective MHC-I or MHC-II context by antigen-presenting cells such as dendritic cells or B cells. This process also requires co-stimulation via the interaction between T cell surface receptors and other molecules on the antigen-presenting cell.5 Following activation, T cells undergo clonal expansion and the resulting effector cells fight the infection, either by orchestrating the overall immune response by other adaptive and innate immune cells (CD4+ T helper cells), or by directly attacking cancerous and infected cells (CD8+ T cytotoxic cells). Memory T cells (Tmem) are T cells which have been primed for a specific antigen but did not mature into effector cells when activated. Instead, they retain their specificity for that antigen, but remain inactive until a second encounter, at which point they activate a much faster and more potent immune response relative to the first encounter.6 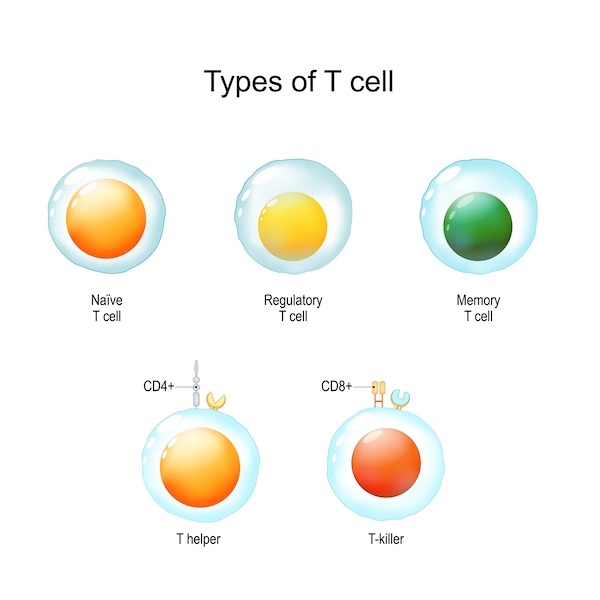 T cells that express a TCR along with CD4 or CD8, and react to complexes of peptide and MHC, are known as conventional T cells. However, the important role of a further subset, known as unconventional T cells, is emerging.7,8 This group – including gamma/delta (γδ) T cells, mucosal associated invariant T (MAIT) cells, and invariant natural killer T (iNKT) cells – shows simplified invariant patterns of T cell antigen receptor (TCR) expression and rapid effector responses, and recognizes a diverse group of ligands, including lipids and small molecules. Defects and deficiencies in unconventional T cells are associated with cancer, autoimmunity, and chronic inflammation, making them an interesting group for further research.

CD3 is the main marker used to identify T cells, and CD4 and CD8 then differentiate the two predominant conventional subsets. Unconventional γδ T cells are positive for gamma-delta surface receptor and usually express CD3, but are negative for CD4 and while CD8 may be partially expressed. CCR7(CD197), CD45RA/RO and CD62L are major markers of naïve, effector and memory T cell differentiation in the periphery.6 Cytokine secretion, alongside cell surface markers, can be used to monitor T cell activation and functional diversity.

Identification of T cell subsets is important in order to study and characterize the adaptive immune response. Flow cytometry immunophenotyping of specific markers can be used to distinguish them. Find out more about each subset of T cells, including function, emerging research, the best investigative methods, and common cell markers, here: