Platelets are small discoid cells of 1-3 µm in diameter that circulate in the blood at a concentration of 1.4-4 x 108/ml. The most well-known function of platelets is in hemostasis, where they are responsible for the formation of a vascular plug to prevent excessive blood loss following injury. More recently, a role for platelets in host inflammatory and immune responses has emerged.

Platelets are formed in the bone marrow from megakaryocytes, which are one of the eight main blood cell types produced from hematopoietic stem cells. Mature megakaryocytes form structures known as proplatelets. Cellular contents, apart from the nucleus, are distributed into these fragments, resulting in the production of several thousand platelets from each megakaryocyte. They do not have a nucleus, differentiating them from most circulating cells, but the youngest ‘reticulated’ platelets still contain a small amount of RNA, and can consequently be identified using thiazol orange staining and subsequent flow cytometric analysis.1 As this immature state has a short lifespan of only one day, the proportion of reticulated platelets can serve as an indicator for megakaryopoiesis in the bone marrow. Mature platelets circulate in the blood for approximately nine days, before being removed by the spleen. 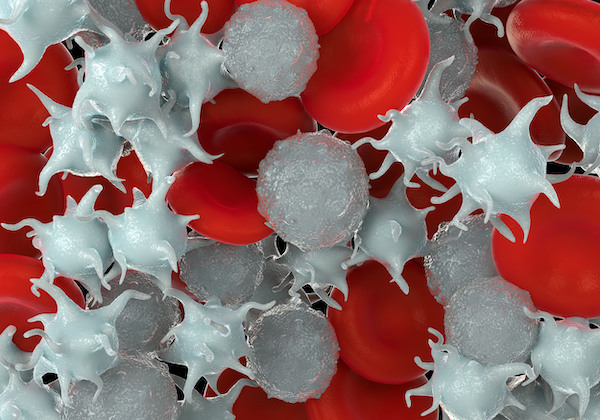 Each platelet’s plasma membrane contains a high number of diverse glycoprotein receptors and signaling proteins, which allow them to respond rapidly to stimulation. Below this plasma membrane is the microtubule ring that gives resting platelets their unique disc shape. The platelet cytoplasm contains several types of secretory granules, which are released when they are activated, and contain a range of factors that further support thrombus formation and wound repair, such as fibrinogen, von Willebrand factor (vWF), fibronectin, ADP, 5-HT, chemokines, and growth factors.

Platelets in hemostasis and thrombosis

Platelets circulate in the blood in a resting state but undergo rapid activation in response to damage to the vascular wall. When damaged, endothelial cells release vWF, and sub-endothelial cell proteins – primarily collagen – are exposed at the site of injury. Collagen and vWF bind to receptors on the platelet surface, triggering a variety of responses including adhesion, shape change, spread, enhanced procoagulant activity, the release of vascular contents, and aggregation. This results in the formation of a primary hemostatic plug, which stops bleeding and helps to reduce infection following injury.

Thrombocytopenia is a condition characterized by abnormally low levels of platelets. There are a number of possible causes, including bone marrow disorders, immune system problems or side effects of certain medications. Thrombocytopenia is often mild, with few signs or symptoms but, in some cases, the number of platelets can be low enough to cause dangerous bleeding.

Platelet activity in thrombosis and hemostasis is generally well characterized, however, recent research has focused on the emerging role of platelets in a number of other physiological processes, including host defense2 and tissue repair,3 which themselves are involved in cancer metastasis4 and inflammatory disorders, such as rheumatoid arthritis.5 Research into the receptors mediating these pathological functions, and their underlying mechanisms, are therefore a major focus of current platelet research. There is also an increasing understanding of platelet-derived extracellular vesicles (PEVs), which are released when platelets are activated and are implicated in inflammation.5 These are the most abundant extracellular vesicles found in human blood, and early indications suggest that they may represent an important differentiating analyte of significant therapeutic interest.

It is not possible to culture platelets as they are not capable of cell division. Platelets are typically collected in blood samples for use in functional assays, and can be used for experiments within whole blood, platelet rich plasma (PRP), or as ‘washed platelets’, where platelets are extracted from plasma by centrifugation and resuspended in buffer. Once isolated, platelets are very sensitive to changes in temperature, pH, and physical shock, which can cause them to aggregate, and therefore careful attention must be paid to their storage.

Platelet counts can be performed with an automated hematology analyzer, or manually with a hemocytometer. Platelets may be counted to monitor or diagnose diseases, or to look for the cause of abnormal bleeding or clotting.

Platelet activation can be monitored based on the presence of different surface markers in the resting and activated state. The reduction or absence of certain markers can also be useful for disease diagnosis.

Overview of the specific markers for resting and activated platelets

Learn more about the science behind many of our instruments