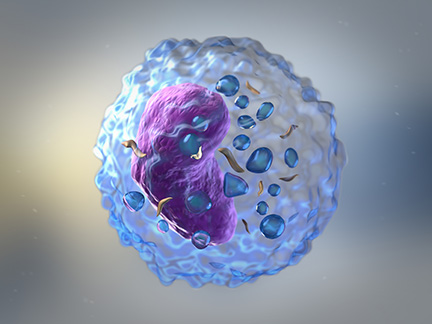 Neutrophils are the most abundant white blood cells, comprising 50-70 % of the total population. These cells are well known for their role in local and systemic infection and inflammation, but they also play a key part in the manifestation and progression of autoimmune disorders like lupus, vasculitis, and rheumatoid arthritis (RA).1

Most neutrophils are produced in large numbers from myeloblasts in the bone marrow– around 1011 cells per day. The rate of neutrophil production is regulated by the action of the cytokines IL-23 and IL-17 produced outside of the bone marrow, as well as by infective and inflammatory conditions that accelerate the turnover.2 The maturation process follows a sequence from promyelocyte, to myelocyte, to metamyelocyte, to band cell and, finally, to a mature neutrophil. Ligand-binding to chemokine receptors CXCR2 and CXCR4 keeps mature cells in the bone marrow until the growth factor granulocyte-colony stimulating factor (G-CSF) triggers their exit into the circulation. Once in the blood, neutrophils have a short half-life of just a few hours.

Neutrophils are also known as polymorphonuclear lymphocytes (PMNs) as they have a characteristic multi-lobed nucleus (varying from three to five lobes). Each cell has a diameter of 7­10 µm and the cytoplasm contains mixed eosinophilic and basophilic granules.3 The granules contain the following enzymes which are responsible for the main host defense functions carried out by these cells:

Neutrophils are the body’s first defense against invading microbes, and this function is achieved by the processes of phagocytosis, degranulation, neutrophilic extracellular trap (NET) formation (NETosis), and oxidative burst.4 C5a, leukotriene B4, and IL-8 are the chemoattractant molecules that signal neutrophils to sites of infection or inflammation, determining the degree of neutrophilic activation and migration.  Ultimately, neutrophils undergo apoptosis and are cleared from the circulation by macrophages , but some cells fail to clear and release fiber-like substances – NETs – made of nuclear DNA coated with proteases and other proteins that help to trap bacteria. As well as being natural defensive tools, NETs also contribute to tissue disrepair and chronic inflammation.5

Neutrophils express high levels of citrullinated autoantigens PAD 2 and 4, which have been detected in the synovial fluid of patients with RA during disease flares, indicating that NETosis might contribute to the progression of inflammation.6 The calcium-binding protein S100A8/A9, which is produced by activated monocytes  and neutrophils, has gained attention in recent years for its role in the pathogenesis, diagnosis, and monitoring of autoimmune diseases lupus and RA.7 Current studies also point towards neutrophil activation and NET formation as possible mechanisms for CLAAS – cocaine/levamisole associated autoimmune syndrome – demonstrated by the presence of antibodies to neutrophilic myeloperoxidase and elastase in patients with this condition.8

An absolute neutrophil count and differential of the white cells can be measured by a standard hematology analyzer, and morphology can be seen on a peripheral blood smear. Other methods include chemotaxis assays (Boyden chamber) to study neutrophils migration and multicolor flow cytometry, which offers high specificity and throughput.

Neutrophils can be distinguished from other granulocytes based on the expression of both CD15 and CD16/FcγRIII and a lack of CD14. In addition, CD66b/CEACAM-8, CD11b/Integrin alpha M, CD33, and myeloperoxidase are other markers that can be used to identify neutrophils.