A scheduled system update will be performed from 8 AM to 3 PM PST Saturday, February 4th. During this timeframe, customers will not be able to place orders online. Please contact us for assistance. We appreciate your patience while we continue to improve the online experience at beckman.com.

Basophils are part of the innate immune system and are responsible for inflammatory reactions during an immune response. They are the least abundant type of leukocyte (white blood cell), making up only around 0.1-1 % of the circulating population. They are also implicated in acute and chronic allergic diseases, including anaphylaxis, asthma, atopic dermatitis, and hay fever.

Basophils are formed from stem cells in the bone marrow through a process called hematopoiesis. They are released as mature cells of about 14-16 µm in diameter, roughly double the size of a lymphocyte, and circulate in the blood for just 1-2 days – making them difficult to study – migrating into tissues when needed. Several cytokines and growth factors – including IL-5, granulocyte-macrophage colony-stimulating factor (GM-CSF), TGF-β, and nerve growth factor (NGF) – influence basophil differentiation and development. 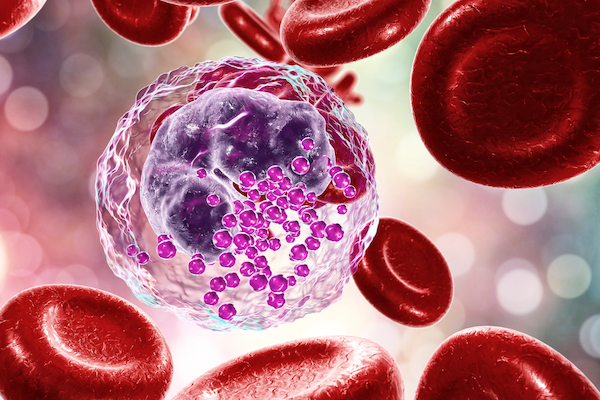 Basophils – like neutrophils and eosinophils – are granulocytes, containing granules that store and release enzymes and chemicals. Basophil granules contain histamine, a mediator of inflammation, and heparin, which prevents blood clotting.

Basophils are recruited to sites of inflammation, where they are triggered either by IgE cross-linking, by a variety of pathogen-associated molecular patterns (PAMPs), or by inflammatory mediators such as complement factors and chemokines. Once activated, they rapidly release the granules and, with them, histamine and heparin. Activated basophils also produce leukotriene C4 (LTC4) and cytokines, including IL-4, IL-13, and MIP-1α, which are believed to play a particularly important role in host response to parasites.

Basophils play a key role in allergy as primary effector cells, expressing the high affinity receptor for IgE (FcεR1). Allergens induce basophil activation by cross-linking of allergen-specific surface IgE, resulting in degranulation and release of pro-inflammatory histamine, which is accompanied by surface exposure of granule components CD63 and CD203c, with differential kinetics and degranulation pathways.

Basophilia – an increased basophil count – is seen in many myeloid neoplasms, especially chronic myeloid leukemia (CML), for which it is a diagnostic criterion.1 Increased numbers of circulating basophils and dysplastic basophils are often seen in patients with other malignancies including polycythemia vera, essential thrombocythemia, myelofibrosis, myelodysplastic syndrome (MDS), and less frequently in acute myeloid leukemia (AML) and acute promyelocytic leukemia (APL).1 The significance of the immunoregulatory functions of basophils in malignant and non-malignant diseases is an active area of research.1

Until recently, basophils were not studied in depth due to being assigned a redundant mast cell-like role, their short lifespan and low abundance. However, their very complex function in allergic inflammation is increasingly recognized, including the production of large amounts of IL-4 which acts on various cell types, including macrophages, innate lymphoid cells, fibroblasts, and endothelial cells. Furthermore, recent reports show that they modulate adaptive immune responses, particularly in inducing Th2 differentiation and enhancing humoral memory responses.2

Basophils are an increasingly attractive target for potential therapies, given their diverse roles in allergy, autoimmune diseases, and helminth infections. Immunotherapies that modulate the FcεR1 signaling pathway, and thereby the release of inflammatory mediators, offer an alternative to traditional treatments that block these mediators directly.

Basophils are well suited to characterization by flow cytometry. They can be identified by their low CD45 expression, their expression of CD294/CRTH2 in the absence of CD3, and their low side scatter signal, the latter in contrast to the other granulocytic populations of neutrophils and eosinophils.

Basophils densely express CD123 (IL-3 R alpha) and CD294 (CRTH2) and, when activated, show a rapid increase in expression of CD63 and CD203c. Mast cells have many similar characteristics but can be distinguished from basophils by their high expression of CD117 (c-kit).3

Overview of the Specific Markers for Resting and Activated Basophils1