A scheduled system update will be performed from 8 AM to 3 PM PST Saturday, February 4th. During this timeframe, customers will not be able to place orders online. Please contact us for assistance. We appreciate your patience while we continue to improve the online experience at beckman.com. 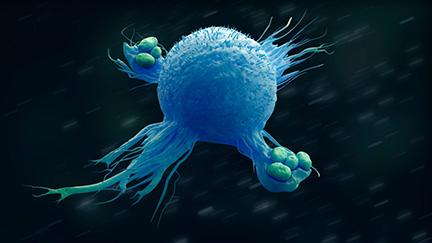 Macrophages are white blood cells that form part of the mononuclear phagocyte system (MPS), a family of cells that also includes lineage-committed bone marrow progenitors, monocytes, osteoclasts and dendritic cells. They are a diverse range of cells that are found in virtually all tissues of the body, where they play a central role in both innate and adaptive immunity, as well as maintaining homeostasis. Each macrophage population has a specialized role in its respective environment, making the cells highly heterogeneous.1

Most macrophages develop from monocytes that are recruited from the blood and migrate to any tissue in the body to differentiate into macrophages in response to certain stimuli. However, some types of macrophages – such as skin Langerhans cells (LC) and brain microglia – originate from common macrophage-dendritic cell progenitors, independent of monocytes and, in some cases, develop directly from the bone marrow.1 These tissue ‘resident’ macrophages are thought to be able to self-maintain their levels in steady state conditions, where they can represent up to 10-15 % of the total cell count, and rapidly proliferate after macrophage depletion or during inflammation.1

The functions of both resident and monocyte-derived macrophages are dependent on the tissue microenvironment in which they are found. For example, brain microglia are integral to cell development and immune surveillance, and LCs are immune regulators and sentinels in the epidermis.1 All resident macrophages, however, share a series of common functions to maintain tissue homeostasis, including the initiation and resolution of inflammation, tissue development, immune surveillance, and phagocytosis of pathogens, apoptotic cells, and cell debris.1,2 Resident macrophages also play a key role in linking innate and adaptive immunity, by antigen presentation of a digested pathogen to promote the T helper cell response. Finally, they serve as transducers of signaling for homeostasis in areas without access to blood vessels – such as the epidermis, cornea, and inside the joints – obtaining and translating information from the tissues.2

All macrophages contain a wide array of surface receptors that allow them to recognize and respond to stimuli. Changes in the microenvironment lead to alterations in gene expression and, ultimately, a phenotypic change. This plasticity is a hallmark feature of macrophages, enabling them to polarize into two broad subsets to carry out specific tasks. Classically activated, or M1, macrophages produce pro-inflammatory cytokines – such as interleukin (IL) 1β, IL-6, IL-12, IL-23, and TNF-α – and nitric oxide, which has microbicidal activity and cell proliferation capacity.1,3 Conversely, alternatively activated, or M2, macrophages produce anti-inflammatory cytokines, including IL-10 and TGF-β.3

Macrophages can play a role in the pathogenesis of several diseases, including cancers and autoimmune disorders. Tumor-associated macrophages (TAMs) are the most abundant immune cells in solid tumor microenvironments, and their density of infiltration correlates with a poor prognosis for the patient. TAMs resemble M2 macrophages, and stimulate angiogenesis, tumor cell invasion, metastasis, and intravasation at the primary site to promote tumor growth.4 On the other hand, macrophages have the ability to phagocytose tumor cells and, with repolarization toward the M1 type, can exert antitumor functions, making them promising candidates for cancer immunotherapies.5 In addition, a change in the percentage or count of macrophages can be indicative of various autoimmune diseases. Persistently elevated levels of cytokine and chemokine production by dysregulated macrophages contributes to chronic inflammation. The ineffective phagocytosis of apoptotic cells by macrophages has also been shown to contribute to autoimmunity by allowing dead cells to accumulate.6

Novel drug development strategies are looking at how to exploit the plasticity of macrophages to reduce chronic inflammation.7 The M1/M2 paradigm is especially of great interest for cancers and autoimmune diseases – where the majority of cases have an imbalance towards the M2 phenotype – and new therapies aim to selectively alter the phenotype of macrophage subpopulations.7 Other immunotherapies under investigation include those that target cell function – such as enzymatic activity or recruitment – TAM depletion, and genetic modification of macrophage function against tumors. 8,9

Therapeutic studies use stem cell-derived macrophages, which is promising for the development of future treatments, as this method can result in genetically modified macrophage lines.9 TAMs – which are of great interest to future therapeutic interventions – can be efficiently isolated from mouse or human samples for further downstream studies using multicolor flow cytometry.11

CD11b, CD14, CD15, CD16, CD64, and CD71 are common surface markers present on most macrophages. Markers, however, will be different depending on the subset of macrophage. For example, HLA-DR, CD169, and CD206 have all been used to identify alveolar macrophages,12 and identifying the M1/M2 morphology of monocyte-derived macrophages has been performed with CD68, CD80, CD86, CD163, and CD206.13