Normally, genetically compromised cells which have escaped proliferation checkpoints are identified and eliminated by the immune system. When this system breaks down or is circumvented, these oncogenic cells are allowed to survive and thrive, leading to cancer. Immunotherapy is a scientific field that seeks to understand the immune system-cancer cell relationship in order to harness and augment natural immune mechanisms to combat the disease.

Current immunotherapeutic strategies can be roughly divided into three broad categories: cell-based, receptor/pathway-based, and agent-based. Cell-based strategies such as adoptive cell transfer strive to improve immune cell efficiency. This can be done by increasing cellular function, enabling more specific cell targeting, or simply increasing the raw number of cells present. Alternatively, receptor and pathway-based strategies use exogenous agents to impede mechanisms instrumental to cancer cell survival. For example, cancer cells can inactivate T cells through PD-1/PD-L1 binding, thus evading immune detection and immune-mediated killing. Checkpoint inhibitors are molecules specifically designed to antagonize this interaction, and thus facilitate continued immune cell function. Finally, agent-based strategies, such as antibody therapy, directly target cancer cells with cytotoxic payloads. These agents are designed so that they will interact only with cancer cells in order to not deliver their deadly payloads to healthy host cells.

Genetic engineering can be a significant and valuable component for all of these approaches. Gene editing, for example, can be used to modulate receptor expression levels for receptor-based strategies, induce the production of certain molecules for agent-based strategies, or even change cellular phenotypes for cell-based strategies. 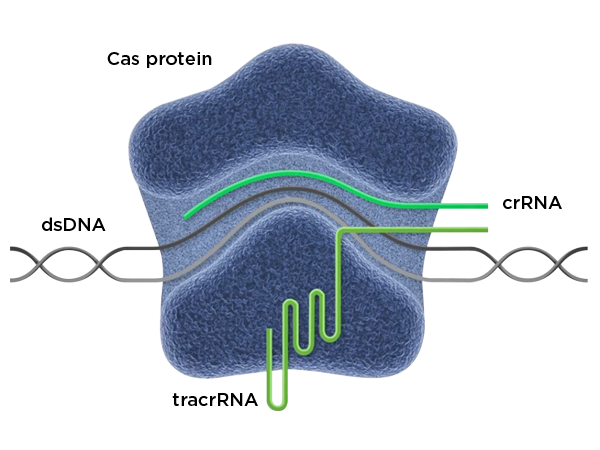 The discovery of the CRISPR-Cas system has revolutionized genetic engineering. CRISPR (clustered regularly interspaced short palindromic repeats) systems cleave double stranded DNA, triggering a host repair mechanism which can inactivate the gene by introducing insertion/deletion mutations at the cleavage site. However, the true utility of CRISPR is that this cleavage can be directed using guide RNAs, allowing scientists to inactivate specific genes of interest. Additionally, scientists can introduce template sequences for insertion at the cleavage site, allowing CRISPR to facilitate both loss-of and gain-of-function experiments.

Naturally, CRISPR-guided gene editing has tremendous potential for immunotherapy research. It is capable of screening large panels to identify key genes for immune system function and anti-cancer activity. With greater efficiency than traditional transfection and transduction methods, CRISPR can enable the production of custom engineered cells such as CAR-T cells. The CRISPR system can even be used directly in immunotherapeutic approaches. It can be introduced to cancer cells, preventing immune evasion by disabling the genes responsible for encoding immune evasion receptors, or even killing cancer cells outright by inactivating the genes required for cell division.

Given the relative novelty of CRISPR itself, it is unsurprising that CRISPR-guided anti-cancer research is still in its infancy. However, CRISPR-system gene editing offers extraordinary potential for developing more potent, more efficient, and less intrusive methods to fight cancer.

For more information on how CRISPR can be used in immunotherapy, please watch the short video below.