Horizontal rotors are so-called because the buckets or racks which hold the centrifuge tubes are suspended in a manner which allows them to swing up into the horizontal plane when under the influence of a centrifugal field. Thus, when the centrifuge is operating, particles sediment along an unimpeded, radial path, away from the center of rotation, and deposit evenly on the bottom of the tube or other container. The flat upper surface of the sedimented material simplifies removal of the supernatant from a loosely packed pellet. By means of various adapters, more than one type or size of tube can be centrifuged together, provided the load is properly balanced

Fixed angle rotors hold the tubes at an angle to the axis of rotation. The angle varies with different rotors, somewhere between 25° to 40° being common. Although particles sediment along a radial path in these rotors also, they soon strike the opposite side of the tube where they slide down the wall to the bottom. The result is faster sedimentation than can be achieved in horizontal rotors which have a longer sedimentation pathlength. But because the bottom of the tube is not aligned with the direction of the centrifugal force, particles will collect partly along the side of the tube. This can make the collection of a loosely packed pellet somewhat more difficult than when a horizontal rotor is used.

The Sedimentation Path of a Particle 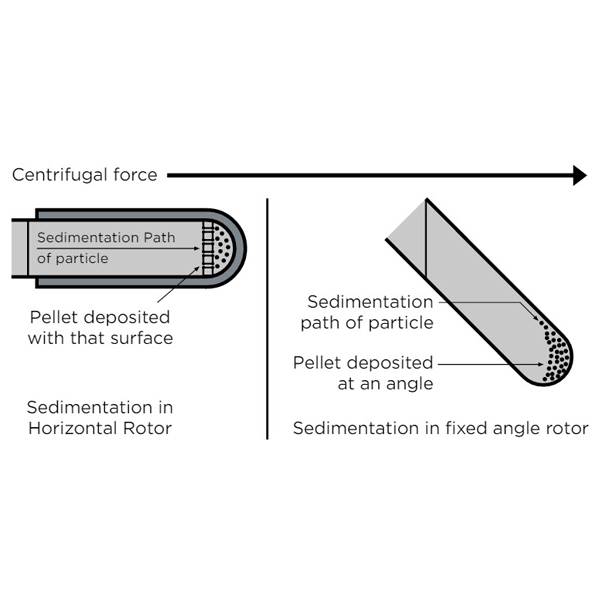 Within these two categories of rotors, various models offer different combinations of capacity and maximum RCF attainable. Horizontal rotors, in particular, have accessories which suit them to a wide range of applications. The buckets suspended from the rotor yoke can carry large containers such as blood bags or bottles. Adapters are available for these buckets so that a number of small tubes can be run simultaneously for applications such as RIA. Horizontal rotors can also be equipped with racks or carriers, rather than buckets, suitable for spinning RIA tubes or micro-test plates.

When quick pelleting of small particles is required, fixed angle rotors should be used. Because of their design, these rotors are capable of higher speeds than the horizontal type. Sedimentation of larger particles, such as cells, protein precipitates, antigen-adsorbent complexes, urinary crystal, etc., can be done at lower speeds with horizontal rotors Maximum centrifugal force can be obtained with the latter if a wind-shielded version is used. (Wind-shielding improves rotor aerodynamics so that higher speeds are possible.) Density separation of cells is done best in a horizontal rotor of either type.