In your research it is often necessary to replicate run conditions you see in published protocols. When reviewing these protocols make sure the instructions offer complete run information, including the rotor's name or max radius, RPM or RCF, and run time.

When reviewing published protocols make sure the instructions offer complete run information, including the rotor's name or max radius, RPM or RCF, and run time. For example, unless a rotor is also specified, or its maximum radius given, there’s no way to know what RCF is required to achieve that separation. A rotor such as the JS-5.2 with an rmax of 226mm generates 4050 x g. This difference of 500 x g seems small, but it is large enough to affect the results of certain separations if disregarded. The preparation of blood components or the pelleting step specified by radioimmunoassay (RIA) kits are examples of separations which require careful attention to the conditions of centrifugation.

Many adapters are designed to carry a number of small tubes have bottoms, which are 10-15 mm or more thick. Most separations won’t be affected by this small reduction in the effective rmax. But if you need a more accurate calculation of RCF when using such adapters, you’ll have to subtract the thickness of the adapter bottom from the rmax of the rotor to obtain the effective rmax for that rotor adapter combination. 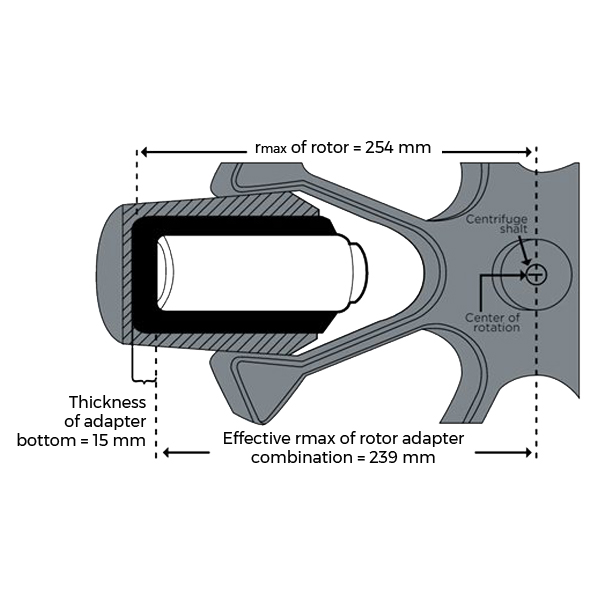 This is not to say that a run made in one rotor cannot be duplicated in a rotor with a different rmax. The same results can be achieved, but a change in rotor speed (or run time) must be made to compensate for the difference in rmax. Use the nomogram below for speed selection. By following these instructions, you can estimate RCF’s and speeds for rotors of various radii. 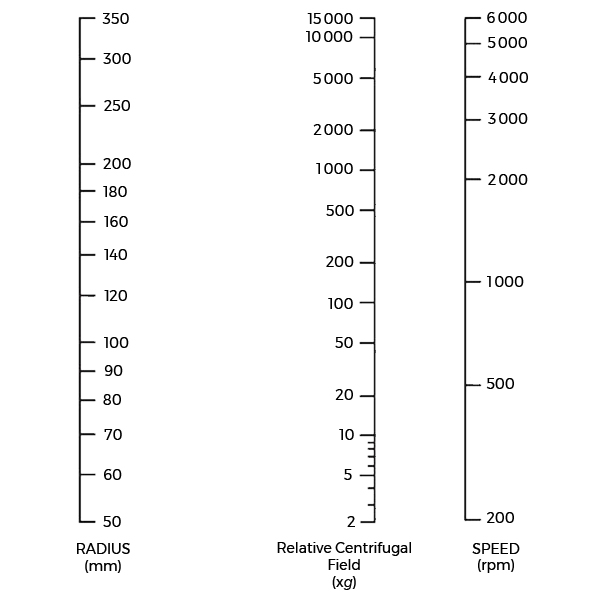 You can also calculate the proper speed to use by means of the RCF equation below. Let’s say you want to follow a procedure written for a rotor with an rmax of 250 mm which calls for an RCF of 3430 x g. You want to duplicate these conditions in the Beckman Coulter JS-5.2 which has an rmax of 226 mm. In this case you need to transpose the equation to solve for speed in rpm, so RCF = 1.12r(RPM/1000)2 becomes

Thus, the JS-5.2 rotor will produce an RCF of 3400 x g if run at about 3681 rpm. If the original directions had specified the speed and radius of the rotor to be used, rather than the RCF, you would first have to find the RCF that combination generated, by means of the Nomogram for Speed Selection chart above or this equation:

Sometimes it may be better to change the length of time samples are centrifuged than to change the centrifugal force. You might want to duplicate a procedure calling for 10 minutes of centrifugation at 3000 g. Can you use a JR-3.2 rotor which attains a maximum RCF of 2300 x g? Yes, but you’ll have to run the samples a bit longer. The time required can be found with this equation:

Thus, in our example,

Directions given for times of centrifugation usually correspond to the times to be set on the centrifuge’s time control. This setting includes time for the rotor to accelerate and time at operating speed, but not deceleration time. The latter depends on the weight of the rotor, including its load, the type of brake system, and the brake setting selected by the operator. If a maximum brake setting is used, a fully loaded rotor takes somewhere between 1 and 3 minutes to decelerate.

Sedimentation of particles in the sample continues during deceleration, of course, but the rate decreases as the rotor slows. Minimum deceleration times can be obtained by use of maximum brake settings. However, maximum braking in the final phase of rotor deceleration may be too abrupt when large diameter bottles or blood bags are in use; the result may be some undesirable stirring and re-suspension of the sedimented material. The presence of this resuspended material can easily be mistaken for a poor separation.

A word of caution: before you change centrifugation conditions be very sure your particular sample will not be harmed by harder pelleting or by longer centrifugation times. Small changes usually cause no problem. However, some biological samples deteriorate if centrifuged too long, especially without refrigeration. And certain assays, which are sold in the form of kits, may be time-sensitive. When in doubt, follow the original instructions as closely as possible.