In order for a rotor to run smoothly and safely at its operating speed, the load it carries must be balanced. A rotor can be properly balanced by following some simple rules:

Most centrifuges are equipped with an imbalance detector which turns the centrifuge off before any eccentric rotation caused by a load imbalance can damage the drive shaft or bearings. However, the improper distribution of tubes in carriers or adapters can cause poor separations even if the imbalance isn’t severe enough to trigger this detector. In these situations, the buckets won’t pivot to the required horizontal position during the run, resulting in poor density separations or re-mixing of sedimented material during deceleration. Also, the possibility of tube breakage during the run is greatly increased when the buckets are not horizontal at operating speed.

You may notice that the centrifuge vibrates when the rotor is accelerating or decelerating at low speeds. This is normal, and occurs as the rotor passes through a so called critical speed range where any small vibrations are temporarily amplified. Your separations will not be disturbed during deceleration, because the centrifugal force is still high enough to stabilize them. However, you should not select an operating speed within the range where these exaggerated vibrations occur. Your instruction manual will tell you what speeds to avoid. 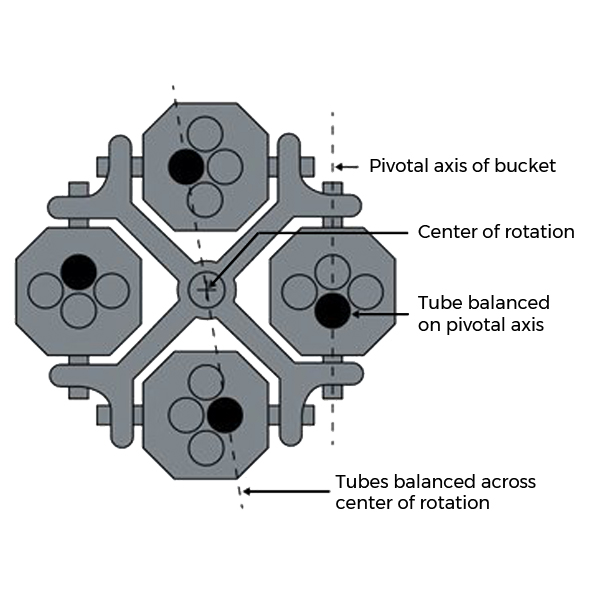 Example of a balanced load: 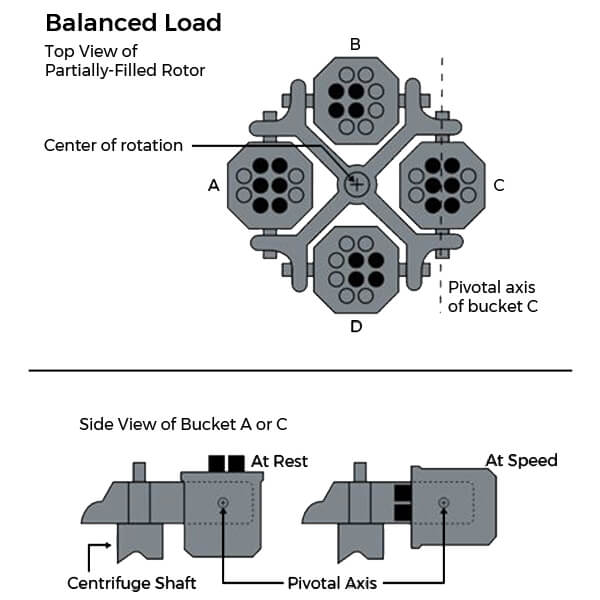 Assuming all tubes have been filled with an equal amount of liquid, this rotor load is balanced. The opposing bucket sets A-C and B-D are loaded with an equal number of tubes and are balanced across the center of rotation. Each bucket is also balanced with respect to its pivotal axis.

Example of an unbalanced load: 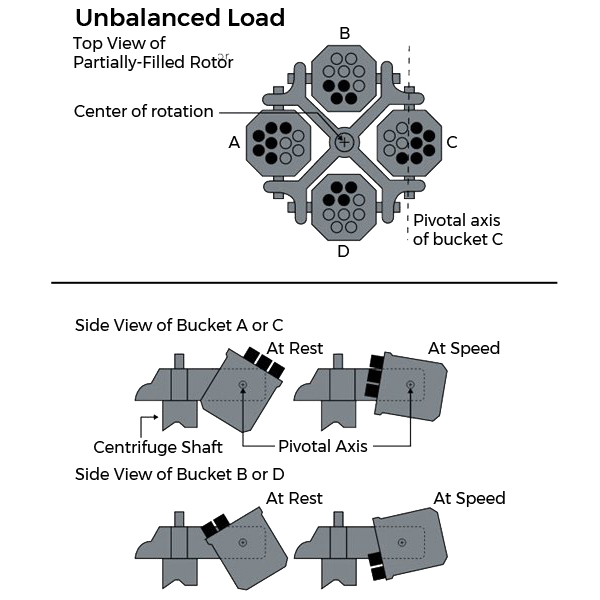 Even if all the tubes are filled equally, this rotor is improperly loaded. None of the bucket loads are balanced with respect to their pivotal axes. At operating speed, buckets A and C will not reach the horizontal position. Buckets B and D will pivot past the horizontal. Also note that the tube arrangement in the opposing buckets B and D is not symmetrical across the center of rotation.