A centrifugal field can be used to separate particles in a solution. By using a centrifuge, you can speed up the sedimentation process. The force which moves each cell away from the center of rotation is many times greater than the cell’s own weight in the earth’s normal gravitational field.

How can a centrifugal field be used to separate particles from a mixture—blood, for instance?

Blood consists of plasma (which is a solution of water and many other compounds) and several kinds of particles in suspension, namely: red cells, white cells, and platelets. These cells are fairly large for biological particles—large enough, in fact, to settle out of the plasma if clotting is prevented and the blood is left standing in the 1-g field of the earth’s gravity overnight. By using a centrifuge to generate an RCF of 1500 x g, we can speed up this sedimentation process and separate the cells from the plasma in approximately 10 minutes.

Why does this happen so quickly in a centrifugal field? Because the force which moves each cell away from the center of rotation is many times greater than the cell’s own weight in the earth’s normal gravitational field—1500 times greater, in the example above.

Not all cells sediment at the same rate: large ones sediment faster than small ones. Thus, one kind of cell can be separated from another if there is a sufficient difference in size and sedimentation rate. 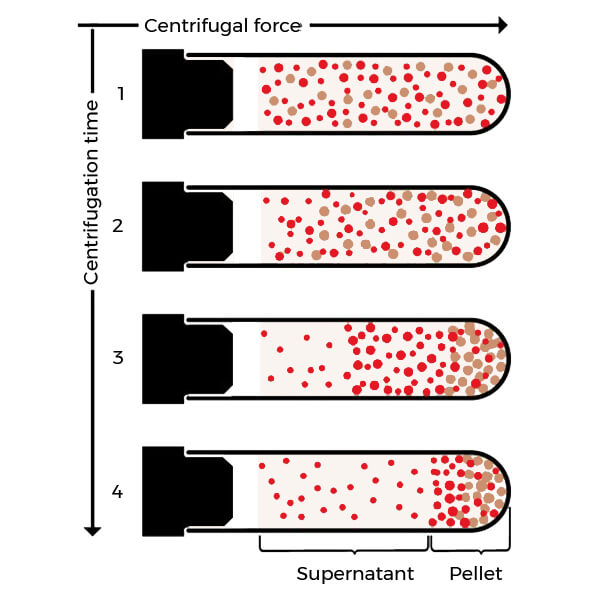 Platelets, for instance, can be separated from red and white blood cells because they are so much smaller. It’s only necessary to pick the right combination of centrifugal force and time. If blood is spun at 2900 x g for just 3 minutes, the platelets will not have time to move down with the heavier cells and can be collected from the top platelet rich plasma.

The process just described produces a pellet or sediment of particles in the bottom of the tube or other container. The liquid above the pellet is called the supernatant. As you can see from Figure 1, it is possible to collect a fairly pure fraction of the smallest particles from the supernatant. But the pellet or larger ones will always contain some of the smaller ones, which were near the bottom of the tube before centrifugation began. By centrifuging at various speeds and times, different size particles can be separated and collected from a mixture. This method is called differential centrifugation.

Density, another physical property of particles or cells, can also be exploited for the purpose of making separations. By applying centrifugal force, we can separate particles with small difference in density. It’s only necessary to adjust the density of the liquid in which they will be sedimenting so that particles of one density will float, and particles which are more dense will sink.

There’s another physical property of particles or cells, which can also be exploited for the purpose of making separations: density. Consider an apple, and a rock of exactly the same size and shape. A rock is a much more compact material than an apple, hence it sinks in water while an apple floats. It has more mass per unit volume, which is another way of saying its density is greater. Density is commonly expressed as grams per milliliter (g/mL); water has a density of 1 g/mL. By applying centrifugal force, we can separate particles with small difference in density. It’s only necessary to adjust the density of the liquid in which they will be sedimenting so that particles of one density will float, and particles which are more dense will sink.

This method is often used to separate lymphocytes, a type of white blood cell, which are so similar in size to many other blood cells that they can’t be separated by ordinary sedimentation methods. However, their density is lower than the other cells. If a blood sample is layered over a liquid which has a density of 1.077 g/mL and then centrifuged, the lymphocytes will form a floating band, well separated from most other white and red cells which, being denser than 1.077 g/mL, sediment to the bottom of the tube. Plasma and platelets, the least dense of all, float to the top as illustrated in the figure to the right. 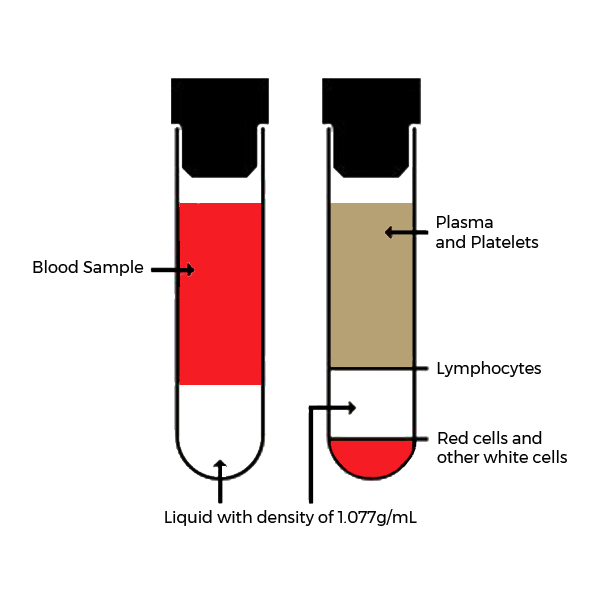 The image shows a density separation of lymphocytes. The tubes are shown before and after centrifugation