Considering only the visible part of the electromagnetic spectrum, the interaction of light and matter produces four inherently related scattering phenomena. We differentiate these phenomena by the words diffraction, refraction, reflection, and absorption. Using a one sentence definition for each of the above, we might define diffraction as the bending of light by the edges of an object; refraction the changes that occur when light crosses the boundary between an object and its surrounding medium; reflection as the return of light from an object's surface; and absorption by the attenuation of light by the object. Figure 1 depicts the three light scattering phenomena commonly used in particle size analyses (reflection has been omitted – for almost all finely divided materials any effect of reflection is negligible). 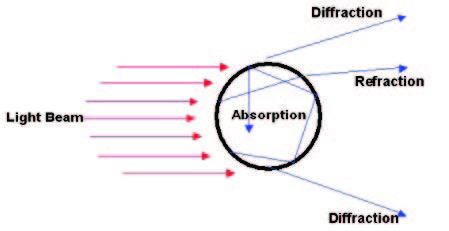 Figure 1: Scattering by a spherical particle

Instances of these (seemingly distinct) scattering phenomena are not uncommon in everyday life. For example, an image in a mirror is produced by the reflection of light. Absorption is what causes dark colored clothing to feel warmer in sunlight than those that are white or pastel-colored. The apparent bending of a pencil that is half submerged in a glass of water illustrates one effect of refraction; -- our understanding of refraction also aids us in the construction of corrective lenses. Examples of diffraction are less common, yet a familiar demonstration in many physics classes can easily be recreated with a laser and a sheet of paper into which a small hole has been cut. In this experiment, light is 'bent' (diffracted) by the edges of the opening, creating a regular, alternating pattern of light and shadow on a wall or screen some distance away. Figure 2 is a picture of the scattering pattern produced by a sphere. 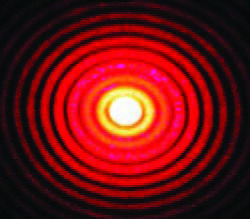 A mathematical description of diffraction was advanced in the early 1800's by Josef von Fraunhofer. At a given wavelength, Fraunhofer's theory predicts the angular location of the scatter maxima and minima as a function of an object's size.

Although Fraunhofer theory accounts for how these patterns of light and shadow are created, the diffraction of light is a phenomena produced by the interaction of light and an object that is essentially two-dimensional, such as a disk or a hole in a sheet of cloth. The interaction of light and a three-dimensional object, such as a particle, results in scattering that is not simply a product of diffraction, but arises from the refraction and absorption of light as well. In this sense, Fraunhofer's theory is only an approximation to the complete solution to the problem of the scattering of light by any "real-world" object, and its application in particle sizing is therefore inherently limited to cases in which: a) the size of the particle is large with respect to the wavelength, b) the angle of observation is small, and c) the particles are non-transparent.

For particles large with respect to the wavelength, the Fraunhofer approximations to the complete Mie theory are functionally equivalent. However, as the diameter of the particle approaches the wavelength the effects of refraction and absorption increasingly influence the scattering patterns. Fraunhofer's equation of the diffraction of light by a circular object describes the relative intensity of scattered light solely in terms of wavelength, angle, and particle diameter (this diameter being the distance between the edges of an object). A description of the interaction of light and a three dimensional object has to account for the object's material properties, e.g., its refractive index.

It wasn't until James Clerk Maxwell set forth the equations establishing the fundamental relationship between electricity and magnetism that a complete, rigorous theory of the scattering of light became possible. Today this theory is commonly known as Mie Theory, named after the 1908 treatise by the physicist Gustav Mie. The theory predicts the relative intensity of scattered light as a function of particle size, angle of observation, and wavelength and polarization of the incident beam. This is provided that the particle is smooth, spherical, internally (optically) homogeneous, and of known refractive index. Mie's theory is necessarily inclusive of Fraunhofer's in that it describes, not only the effects of diffraction, but it is also able to model the scattering that results from the refraction, reflection, and absorption of light (phenomena which arise only from the interaction of light and a three-dimensional object). Returning to Figure 1, it should now be apparent that the scattering of light by a small particle is created not just by diffraction, but by refraction and absorption as well.

However, even though the Mie theory has been derived almost one hundred years ago, its applications in resolving spherical particle size distribution through laser scattering angular pattern measurement were impractical due to its mathematical complexity. For example, to calculate a scattering matrix of 100x100, i.e. one hundred detectors with one hundred size bins, almost an hour was needed by using an IBM compatible 386 computer in the early 1990’s. Only the Fraunhofer approximation could be used in those days of insufficient computing power. Nowadays with the power of a Pentium computer, the same 100x100 matrix can be computed in a fraction of a second and the real time computation of particle size distribution from measured scattering intensity is feasible. Therefore, except when the refractive index of sample is unknown, there is no reason to use the Fraunhofer approximation in laser diffraction technology. Especially for particles smaller than ~25 μm, the use of the Fraunhofer approximation will produce large and unexpected error in the retrieved particle size. However, due to the above historical reason and for the reason not confusing this technology with another static light scattering technology that is mainly applied in measuring molecular weight of macromolecules, this technology is still called laser diffraction throughout the industry.