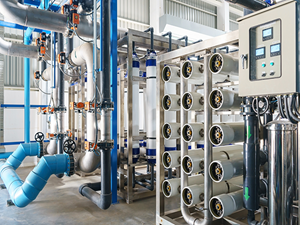 Chapter 2.2.44 of the European Pharmacopoeia describes the procedures used to qualify a chosen method for analyzing total organic carbon (TOC) and the interpretation of results in limit tests.
Specifically, it recommends that TOC analyzers designed for measuring purified water (PW) and water for injection (WFI) fully oxidize the organic contaminants to carbon dioxide to release organic carbon for accurate TOC measurement.

A recent revision of EP 2.2.44 permits generation of WFI using reverse osmosis (RO), paving the way for companies to move away from using stills. This change, however, came with a warning from experts—who guided the European Directorate on this change—that RO may not be as robust as a still for manufacturing WFI. For this reason, they suggest use of on-line TOC and conductivity measurements as early indicators of potential water quality issues.

EP 2.2.44. Total Organic Carbon in Water for Pharmaceutical Use

Total organic carbon (TOC) determination is an indirect measure of organic substances present in water for pharmaceutical use. TOC determination can also be used to monitor the performance of various operations in the preparation of medicines.

A variety of acceptable methods is available for determining TOC. Rather than prescribing a given method to be used, this general chapter describes the procedures used to qualify the chosen method and the interpretation of results in limit tests. A standard solution is analyzed at suitable intervals, depending on the frequency of measurements; the solution is prepared with a substance that is expected to be easily oxidizable (for example, sucrose) at a concentration adjusted to give an instrument response corresponding to the TOC limit to be measured. The suitability of the system is determined by analysis of a solution prepared with a substance expected to be oxidizable with difficulty (for example, 1,4-benzoquinone).

The various types of apparatus used to measure TOC in water for pharmaceutical use have in common the objective of completely oxidizing the organic molecules in the sample water to produce carbon dioxide followed by measurement of the amount of carbon dioxide produced, the result being used to calculate the carbon concentration in the water.

The apparatus used must discriminate between organic and inorganic carbon, the latter being present as carbonate. The discrimination may be effected either by measuring the inorganic carbon and subtracting it from the total carbon, or by purging inorganic carbon from the sample before oxidization. Purging may also entrain organic molecules, but such purgeable organic carbon is present in negligible quantities in water for pharmaceutical use.

Apparatus -  Use a calibrated instrument installed either on-line or off-line. Verify the system suitability at suitable intervals as described below. The apparatus must have a limit of detection specified by the manufacturer of 0.05 mg or less of carbon per liter.

Depending on the type of apparatus used, the content of heavy metals and copper may be critical. The manufacturer’s instructions should be followed.

Glassware Preparation - Use glassware that has been scrupulously cleaned by a method that will remove organic matter. Use TOC water for the final rinse of glassware.

Test solution - Using all due care to avoid contamination, collect water to be tested in an airtight container leaving minimal head-space. Examine the water with minimum delay to reduce contamination from the container and its closure.

TOC Water Control - Use TOC water obtained at the same time as that used to prepare the standard solution and the system suitability solution.

Control Solutions - In addition to the TOC water control, prepare suitable blank solutions or other solutions needed for establishing the baseline or for calibration adjustments following the manufacturer’s instructions; run the appropriate blanks to zero the instrument.

The system is suitable if the response efficiency is not less than 85% and not more than 115% of the theoretical response.

Procedure. Run the test solution and record the response (rU).

The test solution complies with the test if rU is not greater than rS – rW.

The method can also be applied using on-line instrumentation that has been adequately calibrated and shown to have acceptable system suitability. The location of instrumentation must be chosen to ensure that the responses are representative of the water used.