*Also detectable in 780/60 bandpass used in the CytoFlex and several of the CytoFLEX S series instruments. 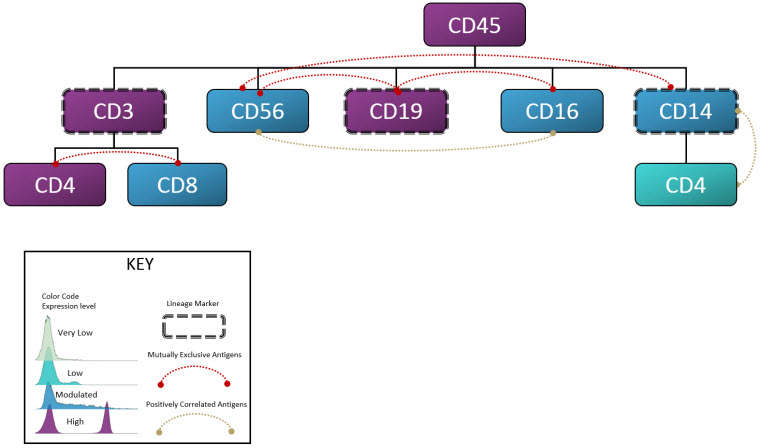 Hierarchical tree structure showing parent-child relationships between the interrogated antigens. Child nodes inherit the properties of the parent nodes above it in the tree.  To illustrate, all populations in the analysis will be CD45+, inheriting that property from the parent node. As a principle, spillover from parent to child nodes should be minimized, while spillover from child to parent nodes will not cause a loss of resolution.  Nodes at the same hierarchy level without dashed connections are co-expressed antigens whose resolution is impacted by spillover. Colored boxes indicate the expression pattern for the given marker, the lower the expression the more important it will be to avoid spillover from other dyes into that channel. Mutually exclusive antigens in the same level are indicated with a dashed red line.  Spillover between these detectors will not cause a loss of resolution as the signals will not be present on the same event.  Pairs of antigens that are either double-positive or double-negative are positively correlated antigens that can tolerate spillover, indicated with a dashed gold line.