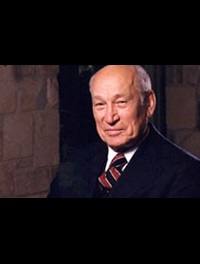 "There is no satisfactory substitute for excellence."

Dr. Beckman once said, "There is no satisfactory substitute for excellence." More than just words, this philosophy guided his life and helped shape scientific history.

Throughout his legacy of excellence, Dr. Beckman assumed many roles—that of educator, inventor, civic leader, philanthropist and humanitarian. The foundation of his highly decorated career was always his personal integrity and his love for science.

Born in the small farming community of Cullom, Illinois, on April 10, 1900, young Arnold Beckman's interest in science was first piqued upon finding a chemistry book in the family attic. Not long after reading Steele's textbook series Fourteen Weeks in Science, originally published in 1861, he converted a tool shed, built for him by his father for his 10th birthday, into a makeshift chemistry lab.

Dr. Beckman began a more serious study of science at the University of Illinois, where he received his bachelor's degree in chemical engineering in 1922, followed by his master's degree in physical chemistry one year later. Throughout his school years, he also tapped into his creative talents by playing piano in silent movies to help support his family and fund his education. Beckman went on to receive his doctorate in photochemistry at the California Institute of Technology (1928), where he also served as a professor.

While he was still teaching, Dr. Beckman founded what eventually became Beckman Instruments, Inc. in 1935. His first invention was the acidimeter. Produced for a former classmate at a Southern California citrus processing plant, Beckman designed the acidimeter to measure acidity levels in lemon juice. The acidimeter was later called a pH meter and quickly became an indispensable tool in analytical chemistry. The invention earned him a place in the National Inventors Hall of Fame in 1987, joining other great inventors like Thomas Edison and Alexander Bell.

Dr. Beckman once stated, "When you're faced with the necessity to do something, that's a stimulus to invention. If [my classmate] hadn't come in with his lemon juice problem, chances are I never in the world would have thought about making a pH meter."

Dr. Beckman continued to develop and manufacture scientific instruments, leading to the release of the DU® Spectrophotometer in 1940. Considered the scientific equivalent of the Model T, this product not only simplified tedious laboratory procedures, it also increased analytical precision and revolutionized chemical analysis. 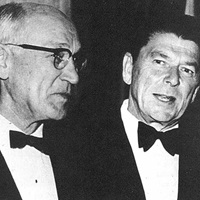 These extraordinary contributions led President George H.W. Bush to award Dr. Beckman the National Medal of Science in 1989 for his leadership in analytical instrumentation development and for his deep concern for the vitality of the nation's scientific enterprises. He was also nationally recognized under the Reagan administration with the 1989 Presidential Citizens Medal for his exemplary deeds of service and the 1988 National Medal of Technology for outstanding technological contributions to the United States.

Dr. Beckman's love of science and spirit of invention lives on in Beckman Coulter, Inc., a company with modest beginnings that today is one of the world's leading manufacturers of instruments and suppliers to the clinical diagnostics and life sciences markets. Currently, the company has approximately 10,000 employees in 35 facilities worldwide and operates in more than 120 countries and territories.

Even though the company has made a wide variety of products over the years, including a "rock smasher" for a Mars robot mission and an electronic radio-like component called a Helipot®, it has never strayed far from Dr. Beckman's original focus on "the chemistry of life."

"The past years have been rewarding for me in many ways," said Dr. Beckman in 1985 during the Golden Anniversary celebration for Beckman Instruments, Inc. "Perhaps the greatest reward is the knowledge that Beckman products have contributed and are contributing to the progress of mankind."

In October of 1997, Beckman Instruments, Inc. acquired Coulter Corporation, a Miami-based manufacturer of cellular analysis systems. In April of 1998 the company was renamed Beckman Coulter, Inc. and is today one of the leading providers of laboratory systems and solutions.

Throughout his outstanding career, Dr. Beckman constantly remained active in his educational and research pursuits. In 1953, he was the first alumnus named to Caltech's Board of Trustees, serving as chairman from 1964 to 1974, at which time he was elected chairman-emeritus. Caltech honored Dr. Beckman with its Distinguished Alumni Award in 1984 and Millikan Award in 1985.

"I've always enjoyed explaining things, whether it's called teaching or anything else," said Dr. Beckman. "It's a challenge to my skill in trying to convey what's on my mind." 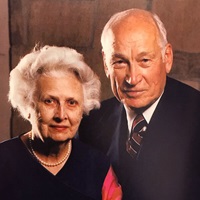 Considered among the greatest philanthropists of all time, Dr. and Mrs. Beckman, through the Arnold and Mabel Beckman Foundation, have contributed approximately $400 million to the advancement of scientific research and education. Their gifts have benefited numerous scientific, educational and medical institutions throughout the United States.

"I accumulated my wealth by selling instruments to scientists," said a humble Dr. Beckman of his vast philanthropic associations. "So I thought it would be appropriate to make contributions to scientists, and that's been my number-one guideline for charity."

Responding to Dr. Beckman's direction, the Arnold and Mabel Beckman Foundation has initiated programs that will help to fulfill his wishes.

Since 1991, the Arnold and Mabel Beckman Foundation has awarded 128 Beckman Young Investigator (BYI) awards totaling $24 million to young scientists who are conducting their research programs at prominent universities and research institutes across the nation.

In 1997, the Arnold and Mabel Beckman Foundation initiated the Beckman Scholars Program, which recognizes outstanding undergraduate students in chemistry, biochemistry, biological and medical sciences research at selected universities and colleges throughout the United States. To date,134 students at 36 universities have received the award.

Dr. Beckman strongly believed that education in the sciences is extremely important at all levels, beginning at the tender age of three or four. "Particularly, I'd like to get young kids interested in science," he said. "The young mind is inquisitive enough that you don't have to worry about scaring up enthusiasm, you simply need to keep them interested and excited about science."

In the fall of 1998, the Arnold and Mabel Beckman Foundation developed the Beckman @ Science Program, a K-6 science education initiative to serve the 300,000 elementary school children in Orange County, California. By 2003, the Arnold and Mabel Beckman Foundation, on behalf of Dr. and Mrs. Beckman, spent approximately $14.5 million on a science education program that has captured children's natural curiosity and stimulated their interest in science through hands-on, inquiry-based science learning experiences.

In 1999, the Arnold and Mabel Beckman Foundation made two five-year awards for $2.5 million as part of a Beckman Research Technologies initiative. This initiative supports the development of new research technologies directed at leading-edge scientific fields of study that have significant potential for creating new approaches to the solution of basic research questions. The awards were granted to the University of Minnesota and the University of Texas, Austin.

The Arnold and Mabel Beckman Foundation, located in Irvine, California, is a separate entity from Beckman Coulter, Inc. 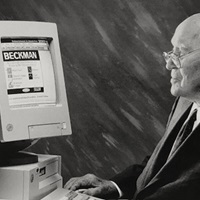 Dr. Beckman was a founder and life member of the Instrument Society of America which, in 1960, established the Arnold O. Beckman Award for outstanding technological contribution to instrument design. In 1981, Dr. Beckman received the Society's first Life Achievement Award in honor of his career achievements in instrumentation and service to the community.

The American Association of Engineering Societies presented him with the 1981 Hoover Medal for his leadership in the development of precision measurement and analytical instrumentation, and for his deep and abiding concern for human values, reflected in his career-long participation in education, civic and public affairs.

A man of strong moral and ethical principles, Dr. Beckman was always compelled to give back to the community at large.

One of his ongoing concerns was the growing problem of air pollution. He was instrumental in initiating studies on the sources of photochemical smog and later helped develop control regulations and warning procedures for Los Angeles County.

In 1953, Dr. Beckman served as chairman of a special technical committee on air pollution appointed by the governor of California. The committee's report on scientific findings and its recommendations for smog reduction served as a standard reference for later air pollution control programs. In 1970, President Nixon named Dr. Beckman to a four-year term on the Federal Air Quality Control Board.

He was named Outstanding Citizen of the Year (1972) by the Orange Coast, California Community College District for his continuing pollution control work in the state and the nation, as well as for the development of new instruments that have advanced man's knowledge.

Dr. Beckman was a member of the Board of Overseers of the House Ear Institute, a director of Hoag Memorial Hospital Presbyterian and the Scripps Clinic and Research Foundation. He was also an honorary trustee of the California Museum Foundation.

Dr. Beckman was past president of the Los Angeles Chamber of Commerce (1956) and the California State Chamber of Commerce (1967). He was a director of the Security Pacific National Bank, the Southern California Edison Co., Continental Airlines, SCM Corporation and Stanford Research Institute. He also served as a director of the Automobile Club of Southern California and the Southern California Symphony Association, and as chairman of the Board of Trustees of the System Development Foundation. His long interest in the promotion of good government led him to help found the Lincoln Club of Orange County, which he served as chairman from its inception in 1962 until 1978 when he was elected chairman-emeritus.