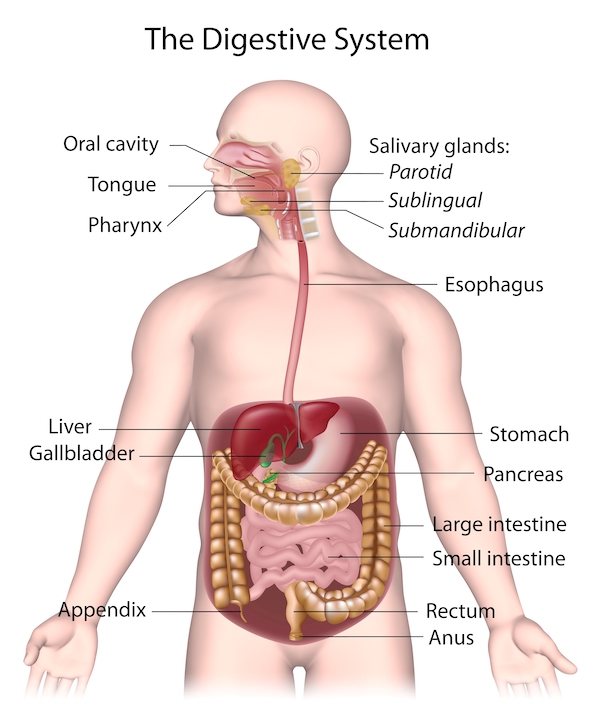 The GI system is made up of two distinct tracts: the upper and lower GI.

The upper GI includes the:

The gallbladder, liver and pancreas all also play an important supporting role to the gastrointestinal system—they are commonly referred to as accessory organs.

Functional gastrointestinal disorders (FGIDs) occur as a result of the GI tract functioning abnormally, though the actual structural integrity of the GI looks normal upon examination and testing.

FGIDs are commonly characterized by recurrent and/or chronic symptoms associated with the abdomen or bowel habits, including:

Motility (the GI tract’s muscular activity), sensation (the nerves response to stimuli) and brain-gut dysfunction (disharmony between the brain and the GI system) are the three most common features associated with FGIDs.

Because the GI system is so complex and symptoms vary from person to person, there is no single treatment strategy that is effective for everyone.

Structural gastrointestinal disorders (SGIDs) occur due to an abnormality in the GI tract and when an organ or internal structure is not functioning properly. These structural abnormalities are discovered during x-rays, computed tomography (CT) scans, blood and urine samples, and endoscopy/colonoscopy procedures.

Symptoms can be similar to those of FGIDs but may also be more severe and include significant and prolonged changes in bowel habits, obstructed bowel movements and rectal bleeding.

Unlike FGIDs, SGIDs typically involve a more in-depth diagnosis and treatment, and often require surgical procedures to rectify and treat. If serious SGIDs go unaddressed, symptoms are likely to worsen, and other complications may begin to arise.

In a study conducted by the University of Gothenburg, it is estimated that for every ten adults in the world, four suffer from FGIDs of varying severity1. Furthermore, It is estimated that in the United States 11% of the population suffer from a chronic digestive disease, with a prevalence rate as high as 35% for those 65 years and over2.