The CD274 antigen is known as Programmed Cell Death 1 ligand 1 (PDCD1LG1 or PD-L1) or B7-H1. It is encoded by a gene located on the human chromosome 9p24. Immune cell function implicates important modulators known as cosignaling receptors. On T cells, the cosignaling receptors belong to either the immunoglobulin (CD28-like) or TNF receptor (TNFR) superfamilies. The CD28 immunoglobulin-superfamily is composed of coinhibitory (CD28, ICOS) and costimulatory receptors. Programmed Death- 1 (PD-1) is one of the three coinhibitory receptors with Cytotoxic T Lymphocyte Antigen 4 (CTLA4) and CD272. CD274 antigen is one of the two ligands, with PD-1 ligand 2 (PD-L2), for PD-1 and belongs to the B7 family. The PD-1 - PD-L1 interaction plays a critical role in regulating T cell activation and tolerance. In particular, it plays a role during development by inhibiting the TCR-mediated positive selection of thymocytes. It has also been shown to be implicated in the regulation of CD4 positive T cells proliferation. CD274 antigen is expressed on immature dendritic cells (iDC), mature dendritic cells (mDC), IFN-γ-treated monocytes, and follicular dendritic cells. 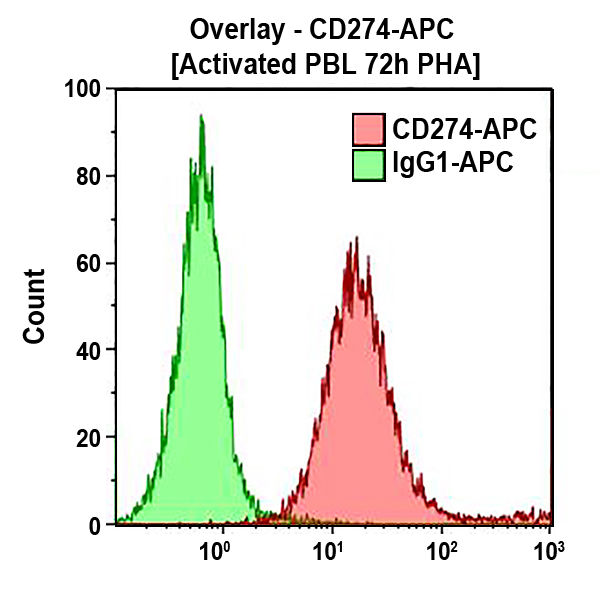