Liquid biopsies represent a promising area of facilitating cancer research as taking blood is less invasive than tumor biopsies. Cell-free DNA (cfDNA) consists of small (150 – 500 bp) DNA fragments that circulate in the blood. Levels of cfDNA tend to be low in healthy, non-pregnant patients and increased in patients with cancer, pregnancy, or extensive tissue damage. cfDNA is believed to be derived mostly from apoptotic cells and a source for biomarkers for a variety of diseases. 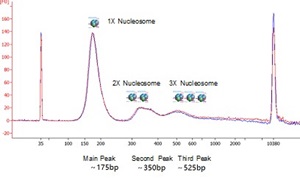 As a non-invasive way to detect disease cfDNA is extracted from blood; however, there is some concern that cfDNA does not contain the same biomarkers as tumor tissue. Tumor tissue is typically removed and stored as formalin-fixed, paraffin-embedded tissue, a process that preserves the morphological structures well but chemically modifies and degrades the nucleic acids.

Despite the difficulties, FFPE tissue (shown on the left) is often used to look for cancer-associated mutations; however it does not always correlate with the mutations seen in cfDNA. In this poster we present a comparison of matched FFPE and plasma samples to determine how many mutation are seen in both tissues. We also look at where the mutational mismatches appear in the chromosome. We found chromosomal regions have different mismatch rates, and we use this to draw conclusions about the best chromosomal locations for biomarkers. We also look at the different results that can come from using multiple different panels.

DNA was extracted from the FFPE tissues using FormaPure XL Total automated on a Biomek i7 hybrid. DNA concentrations of 4 10 uM curls were estimated using the Quant-iT Picogreen; yields varied between blocks. Some blocks had very low yields, most likely due to tissue distribution in the block. The extraction was repeated with 7 10 uM curls. DNA from FFPE was sheared on a Covaris S220 following the 200bp shear protocol. cfDNA was extracted from 1 mL of plasma using the Apostle MiniMax™ High Efficiency cfDNA kit. cfDNA yield varied between the samples as expected. Concentration was estimated using the Kapa hg-Quant kit.

The sequencing data was analyzed using the BWA-enrichment tool on Illumina BaseSpace mapped to the genes in the panel. Below shows the coverage of reads for each of the samples.

Following sequencing the reads were mapped to the genes used in the hybridization panel. Any variants were analyzed further. We separated out the insertion and deletion mutations from single nucleotide variants (SNVs). Mutations found in only FFPE DNA or only cfDNA were compared to each other. The majority of the mutations found were SNVs. There were very few SNVs not found both in the cfDNA and FFPE DNA; neither of the sample types found significantly more SNVs. In contrast, when looking at insertion and deletions (indels), significantly more indels were identified in the cfDNA sequencing (student t-test P=0.03). This is especially true for the cfDNA paired Breast tumors and the prostate tumor. The lung sample showed the opposite result, and one of the CRC tumors showed similar numbers of indels found in both sample types. 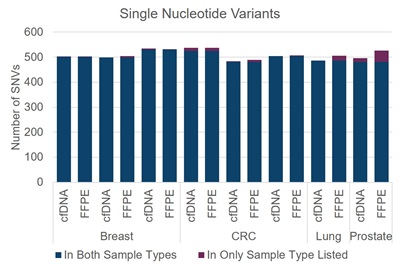 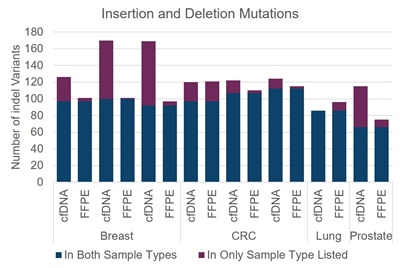 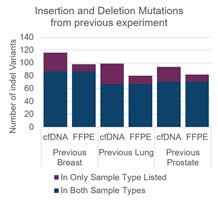 A previous study conducted using three samples, showed results similar to this study. All tumor types showed more indels found in only the cfDNA samples. These results suggest that more indels can be found using only cfDNA samples than only FFPE DNA samples. This result however does seem to be tumor specific and more work should be done to elucidate which tumors types this could be true. Lung tumor samples in the previous data set were different from the data from this study, which suggests that we need more data sets to conclude if cfDNA has a different mutational profile than FFPE DNA. 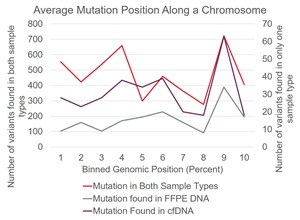 When looking at the graph at the top, mutations found in both sample types have a peak that does not occur in the mutations found only in FFPE DNA. This could suggest that there are mutations that are not found in the FFPE tissue that are found in cfDNA at the start of the chromosomes. 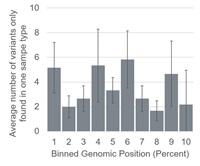 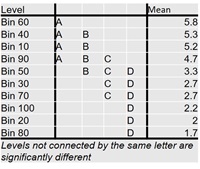 Here we show that sequencing of cfDNA captures the majority of variants that are found when sequencing FFPE DNA. One result shown here is that more indels are identified using cfDNA than with FFPE DNA. This is especially shown here with breast tissue, while this is inconclusive with lung tissue. More samples should be tested before any conclusions can be derived.

Another interesting finding is the distribution of variants across the genome. There is some indication that variants sequenced using cfDNA is correlated better to the variants found with either cfDNA or FFPE. This result could be used to better understand if there is bias that occurs when sequencing FFPE DNA and where this bias could be from such as cross-linking could be more apparent in parts of chromosomes.