With the growing translational research application of mass spectrometry (MS), the need for automation of sample preparation upstream of MS analysis has become increasingly important. Specifically, the multi-step workflows involved in mass spectrometric approaches for measurement of proteins are often fastidious and labor intensive, requiring a level of expertise rarely present in translational research settings. To overcome this challenge, the SISCAPA (Stable Isotope Standards and Capture by Anti-Peptide Antibodies) technology for targeted protein quantitation has been automated.

SISCAPA is an immuno-mass spectrometric approach in which a high affinity antibody specific for a specific proteotypic peptide is used to enrich the target analyte from a complex protein mixture such as a human plasma digest and quantify it against a known amount of a stable isotope internal standard. This targeted workflow enables reproducible quantitation on much lower abundance proteins from complex samples with much higher throughput. The workflow utilizes an 'addition-only' protocol whereby liquid reagents are added to the samples throughout the procedure without any separative steps (e.g. centrifugation, long chromatographic separation etc.). Hence, the sample preparation procedure simplifies to a series of liquid handling steps, which can easily be programmed onto liquid handling robots. In fact, we recently demonstrated that by automating the SISCAPA workflow, proteins of various abundance and size can be measured with intra-run precisions of ~5%1.

In this report we present the first completely hands-free SISCAPA workflow implemented on a Biomek NXP Workstation (Figure 1). The workflow starts with human plasma/serum/blood samples, analyte-specific SISCAPA antibodies, the corresponding stable isotope standards and the necessary reagents as input material. The automated protocol carries the samples through a) tryptic digestion, b) SISCAPA enrichment of target analytes and c) proprietary SISCAPA wash and elute procedures. The enriched peptides are eluted into an elution plate and analyzed using a QTRAP® 6500 mass spectrometer (Figure 1). The protocol is designed to be hands-free and high-throughput with maximum capacity of 10 plates (960 samples) per day per robot. 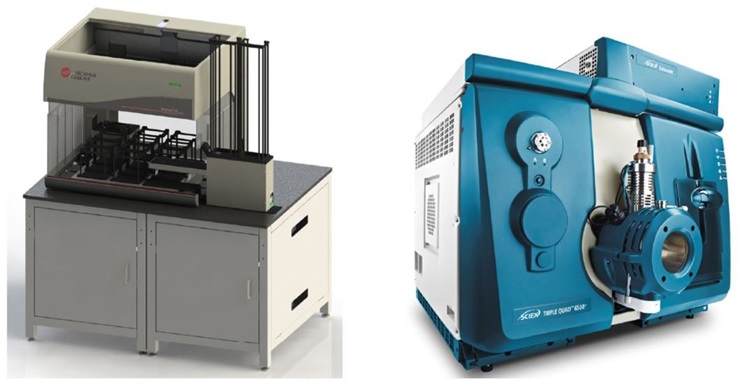 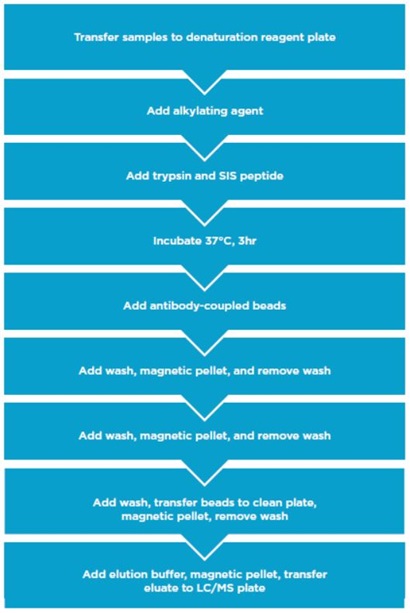 The “addition only” digestion protocol has been described in detail1 and is summarized in Figure 2. Briefly, the samples were first denatured in a mixture of urea, Trizma and Tris(2-carboxyethyl)phosphine hydrochloride (TCEP) such that their respective concentrations were 9 M, 0.2 M and 0.03 M during the reaction. After denaturation the samples were alkylated using 0.06 M iodoacetamide, diluted in 0.2 M Trizma to a final urea concentration of 1 M and digested using trypsin at a protein:enzyme ratio of 10:1. We chose a digestion time of 3 hours, as has been previously determined to yield maximum endogenous signal for all proteins under study. The SIS peptides were added before digestion. After digestion, the assay-specific antibodies coupled to protein-G magnetic beads were added to the samples to capture the endogenous analyte and the corresponding SIS peptide. The enriched peptide targets, now bound to the antibody, were then subjected to a series of wash steps followed by acid-elution from the antibody. The final peptide eluates were then analyzed by a nanoLC™ 425 system coupled to a SCIEX QTRAP 6500 system.

The pooled human plasma was processed as 16 replicates. The eluates from eight of the replicates were pooled at the end of the process to evaluate the imprecision contributed by the mass spectrometric measurements. The remaining eight replicates were processed separately to evaluate the total workflow coefficient of variation (CV). The following sum of squares model was used to calculate the imprecision contributed by the upstream workflow implemented on the Biomek NXP platform:
CVBiomek2 = CVTotal Workflow2 - CVMS2

The SISCAPA workflow was automated on a Biomek NXP Workstation with a 96-channel enhanced selective tip (EST) pod. The EST feature enables any configuration of tips to be utilized, thereby allowing partial sample plates to be processed. The flexible Biomek deck was configured with an orbital shaker and shaking incubator (Inheco, Germany), as well as a Biomek Stacker to allow additional pipette tips and reagent and processing plates to be introduced to the deck as needed. This storage capacity enabled a completely hands-free automated workflow. The Biomek deck layout and the initial SISCAPA configuration are shown in Figures 3A and 3B respectively.

Figure 3. Biomek deck layout (A) and SISCAPA configuration (B) including stacker contents.

For each target peptide, the collision energies and declustering potentials were optimized by injecting 10 μL of 100 fmol/μL solution of the peptide mixture into the LC-MS/MS system and analyzed using Skyline software (University of Washington, USA). The LC-MS/MS platform consisted of a nanoLC™ 425 system operating in microflow mode coupled to a QTRAP 6500 System (SCIEX, USA). A 15 μL aliquot of each sample was pushed through a trap-elute configuration where an isocratic gradient at 3% buffer B (2mins) was used to wash salts to waste. The trap valve was then switched and the analytical gradient was used to separate the peptides on a 2.7 μm HALO Peptide-ES C18 column (SCIEX) with a flow rate of 10 μL/min. The target peptides were separated using a 10-minute analytical gradient with 0.1% formic acid (FA)/5% DMSO in water as solvent A and 90% acetonitrile/5% DMSO in 0.1% FA in water as solvent B. The peak area ratios were analyzed using MultiQuant™ software (SCIEX).

The workflow presented here was designed with three key requirements in mind: a) to demonstrate liquid handling precision b) to be completely hands-free and c) to be high-throughput (capable of processing ~1000 samples per day).

The two key steps of the workflow that significantly impacted the precision were determined to be the SIS peptide addition step and the Clean Plate transfer step. The SIS peptide addition was optimized by manipulating the liquid handling parameters: a 5 μL leading air-gap was aspirated before aspirating the SIS mixture, the content was blown out in the liquid without a tip touch at a speed of 10 μL/s. The Clean Plate was introduced into the washing procedure to reduce the amount of non-specific background peptides thus improving the signal to noise ratio and the overall CV. Figure 4 demonstrates the importance of introducing the Clean Plate during the wash procedure.

Figure 4. The chromatogram for endogenous ApoB peptide (blue) and the corresponding SIS peptide (pink) with (A) and without (B) the Clean Plate in the protocol.

Typical chromatograms for the five endogenous targets are shown in Figure 5, illustrating the difference in abundance. The CV breakdown for the experiment is presented in Table 2. The total workflow CV ranged from 2.1% to 6.7% for different proteins. Consistent with previous reports, the imprecision seen with some assays (albumin and sTfR) was primarily contributed by the mass spectrometric measurements hence making it impossible to accurately estimate the very low imprecision due to the Biomek SISCAPA workflow itself. In cases where measuring the imprecision of upstream sample preparation was possible, the results ranged from 3.6% to 5.0% for different proteins, which includes the imprecision due to digestion variability and the liquid handling imprecision during the SISCAPA procedure. 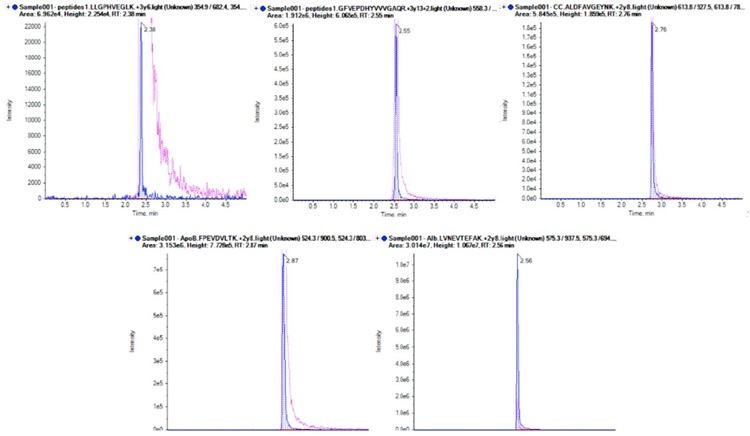 While the automated method is flexible to accommodate the smaller sample number tested here, it is designed to fully process two 96-well plates (192 samples) in 4.5 hours. Performing five consecutive runs would enable the processing of 960 samples per instrument per day, thereby achieving our desired throughput.

The results indicate that the automated SISCAPA workflow implemented on the Biomek NXP platform can be used for precise measurement of proteins of varying sizes and concentrations in plasma. Importantly, this workflow was designed to be completely hands-free and high-throughput and thus is suitable for widespread translational research applications.