Early assessment of the ADMET (Absorption, Distribution, Metabolism, Excretion and Toxicity) properties of drug candidates has become a critical part of modern drug discovery. The frequent failure of compounds due to poor ADMET properties necessitates earlier profiling of ADMET characterizations. As a large number of compounds are screened for ADMET properties against various cytochrome P450 (CYP) enzymes on a regular basis, miniaturization and automation of ADMET assays have become one of the top priorities to manage the cost and labor. The time-dependent CYP inhibition assay is one of the most important ADMET assays which identifies drug candidates that may have potential for undesirable drug-drug interactions or sub-optimal pharmacokinetic properties. Here, we present a miniaturized, simplified and automated method using the Echo 525 Liquid Handler to evaluate compounds with time-dependent CYP inhibition potential with RapidFire/MS. The Echo 525 Liquid Handler can precisely and accurately transfer nanoliter droplets completely contact free to avoid any possible contamination. The rapid transfer of various aqueous reagents enables the evaluation of ADMET properties of a large number of compounds. In this application note, we discuss assay results from miniaturized time-dependent inhibition assays. The time-dependent inhibition for two of the most abundant CYP enzymes, CYP3A4 and 1A2, were evaluated. The results from the Echo Liquid Handler method demonstrate fast, reliable and accurate IC50 values.

The Echo 500 series revolutionizes liquid transfer by using acoustic energy to eject fluids. The Echo 525 Liquid Handler is designed for rapid transfer of biochemical and genomics reagents for assay assembly. The Echo 525 transfers 25 nL droplets of most biochemical reagents. Microliter-scale volumes are rapidly transferred by repeating the 25 nL transfer hundreds of times per second. The Echo 525 system enables contamination-free reagent transfer to precisely and accurately build assays. Miniaturization with the Echo 525 Liquid Handler retains high assay performance, allowing quantitative results at higher densities. The Echo Liquid Handler can be used to transfer any volume to any well. These can be simple fluids (media for growing cells, buffer) or viscous solutions (lysis buffer, antibodies with glycerol, or transfection reagents). 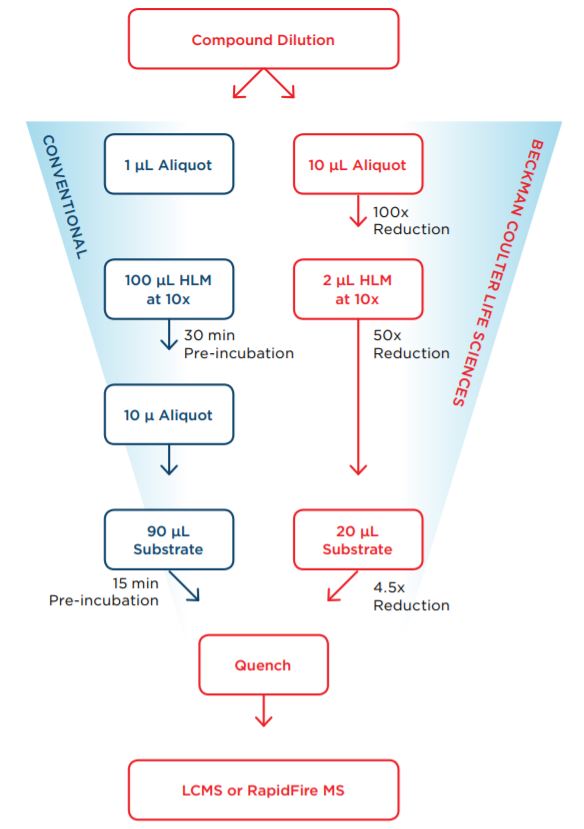 The time-dependent CYP inhibition assay with the Echo 525 Liquid Handler was performed by incubating pooled Human Liver Microsomes (HLM) and test compounds in potassium phosphate buffer in the absence and presence of the cofactor NADPH. Upon completion of preincubation, substrate dissolved in potassium phosphate buffer containing NADPH was added. This reaction was further incubated for additional time in accordance with the CYP enzymes tested. At the end of incubation, acetonitrile was added to quench the reaction. Substrate metabolism was monitored by mass spectrometry. Changes in IC50 during incubation were assessed to determine if testing compounds had time-dependent inhibition. Compounds with greater than 3-fold changes in IC50 (ΔIC50) were generally considered to be time-dependent inhibitors. 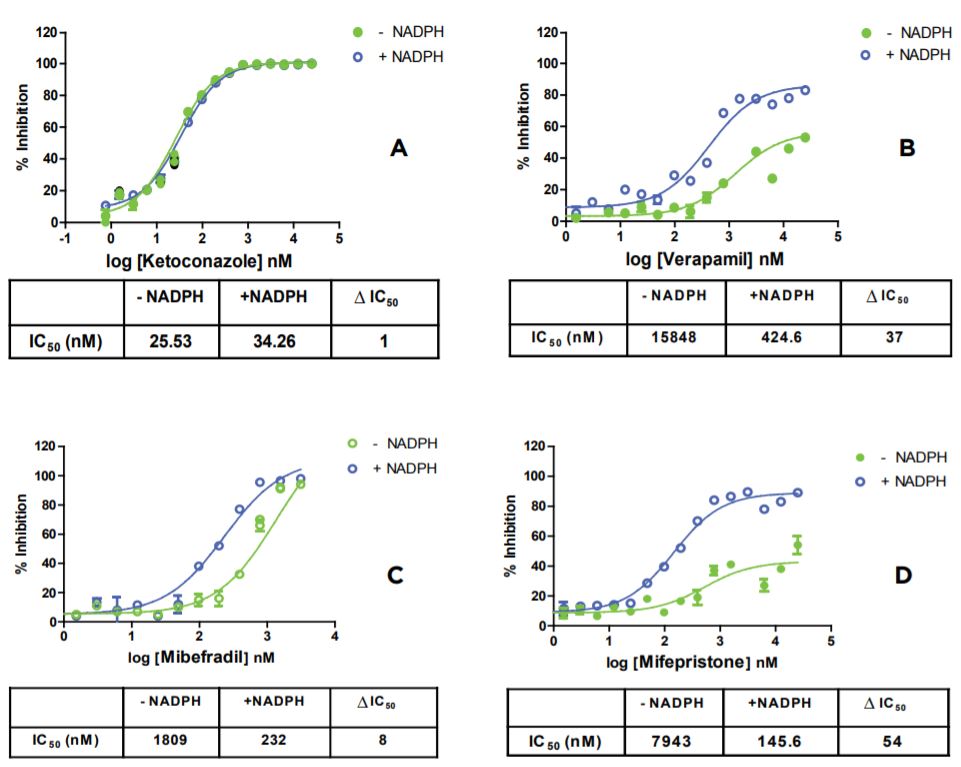 Results from time-dependent CYP inhibition experiments can predict clinically relevant drug-drug interaction potential. Conventionally the assay is run with large reaction volumes to reduce DMSO concentration. Using the Echo 525 Liquid Handler and the Echo 555 Liquid Handler, compound volume can be reduced to 10 nL and microsomes volume to 2 μL. Results presented here demonstrate that miniaturized and simplified time-dependent CYP inhibition assays can be efficiently conducted with the Echo Liquid Handler. The Echo 525 Liquid Handler was used to demonstrate the capability to rapidly deliver low volumes of biochemical reagents in a tipless touchless manner. Superb data quality was indicated by precise and accurate curve fitting and IC50 results that were comparable with literature values. With the Labcyte Echo 525 Liquid Handler, scientists can now evaluate pharmacokinetic parameters in a reliable, rapid and cost-effective manner.