Cellular viability assays are valuable for numerous workflows—from establishing proliferation rates to drug toxicity screens. XTT assays are a simple way of determining the number of viable cells; however, a reliable assay requiresa standard curve of cell dilutions and optimized incubation times. Automation of the cell dilution and plating, reagent addition, and analysis can enhance the consistency of these steps while also minimizing the resources required for higher throughput screens.

The XTT assay1 is a simple way of quantifying relative cell densities to determine the growth rate of cells or the sensitivity to toxic compounds or other cellular treatments. Cell numbers are measured by absorbance as the XTT reagent undergoes a color change upon reduction within the electron transport chain of viable cells. The rate of this coloration is proportional to the number of viable cells in a well and the intensity of coloration increases over time. Because of this, optimal incubation times must be determined for a given range of cell numbers. While the assay is simple to execute (add, incubate and read), challenges arise when requiring higher throughputs, multiple time points and/or consistent timing across multiple plates. Automating the sample preparation, incubation and analysis of XTT assays, as well as upstream steps such as cell plating and treatment, can help overcome these challenges.

Biomek Workstations provide flexible automation solutions to accommodate a variety of workflows and throughputs. Pipetting tools can vary from single to 96 channels across the platforms, and transfer steps can be customized with features such as tip touches or mixing. Configurable deck layouts and the ability to integrate additional devices also increase the utility of the system. To automate the XTT and other absorbance assays, the EMax® Plus Microplate Reader from Molecular Devices, LLC was integrated to the deck of the Biomek NXP Span-8 Workstation. The Biomek Workstation automated the serial dilution and plating of cells, the XTT reagent addition and the reading of the plates on the EMax® Plus Microplate Reader. The reader is controlled through a step in the Biomek method that runs the selected analysis protocol in the SoftMax® Pro (Figure 1). 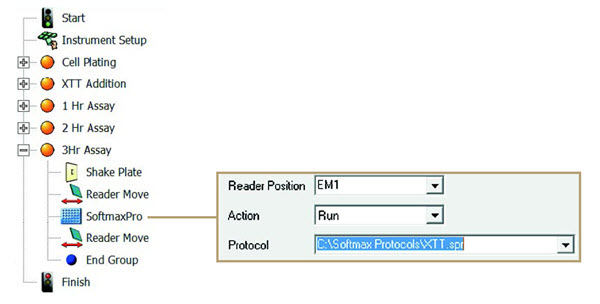 Figure 1. Automated XTT cell viability assay. Screen capture showing a Biomek method that serially dilutes and plates cells, adds activated XTT reagent, and analyzes absorbance at three time points using an integrated EMax® Plus Microplate Reader. The “SoftmaxPro” step allows the user to select a predefined SoftMax® Pro protocol to control the plate analysis. The entire workflow can be automated without intervention through the integration of a humidified 5% CO2 incubator.

While the automation of all components of the assay can improve assay consistency, the workflow for this and other cellular assays are further enabled by integrating additional components to the Biomek Workstation. A sterile environment for automated cell manipulations can be achieved through the use of a HEPA-filtered enclosure, and the integration of an incubator allows for automation of a complete screening workflow—from cell plating and treatment to preparation and analysis. Assays that require incubations can be tightly controlled with scheduling software to ensure that each plate receives identical incubation times following reagent addition—a necessity for comparing results across plates. In addition, the reduction in user interventions improves data integrity by reducing the opportunity for errors while also freeing up resources, particularly as throughput increases.

We utilized the XTT Cell Proliferation Assay Kit (ATCC) to assay HCT 116 cell viability. Cells were trypsinized, counted on a Vi-CELL XR Cell Viability Analyzer and resuspended to a concentration of 200,000 cells/mL. This cell suspension was added to one well of a deep well plate and the Biomek NXP Workstation was used to serially dilute and plate 100 μL of cells in triplicate in a 96-well tissue culture plate (Figure 2). Cells were placed in humidified 5% CO2 incubator at 37°C for 24 hours. 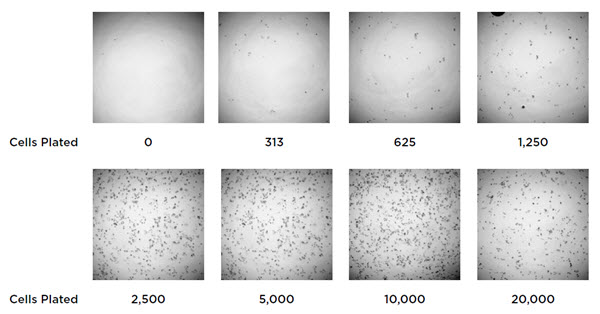 Figure 2. Images of HCT 116 cells following automated dilution and plating. A starting solution of 200,000 cells/mL was added to the Biomek NXP and serially diluted. 100 μL of cells were plated in triplicate and assayed by XTT addition after 24 hours.

The following day, the Biomek Workstation was used to add 100 μL activated XTT reagent to the wells and gently mix the plate by shaking before it was returned to the incubator. The plate was manually returned to the Biomek Workstation and read on the EMax® Plus Microplate Reader every hour for three hours. Well absorbance was measured at 492 nm as well as at 650 nm to assess nonspecific absorbance. One of the advantages of the XTT assay is that the signal increases over time, allowing for wells to be assayed at multiple times to expand the dynamic range of the assay.

Figure 3A (see next page) shows the assay results at one hour, which allows the linear range of the standard curve to extend to the high-end of 20,000 cells/well. Figure 3B (see next page) shows the assay results at three hours, which can better detect differences at the lower cell numbers. Both curves show excellent linearity (R2 of 0.978 and 0.994 respectively), and the R2 value for the one hour curve improves to 0.997 if the 20,000 cell value is removed, suggesting the reagent may be saturated or the well did not provide for a full doubling of the plated cells at this higher concentration. These data indicate this automated XTT assay would provide reliable quantification of viable cells to determine proliferation curves or compound sensitivity. In addition, the coefficients of variation (CVs) were at or below 13% for all triplicate wells. For a biological assay that includes the variability in cell and reagent addition, cell proliferation and metabolism and the analyzer itself, these CV values indicate the automated preparation of these steps is highly consistent.

Figure 3. XTT absorbance curves after one-hour (3A) and three-hour (3B) incubations. Excellent linearity (R2 values) indicates the curves provide a reliable standard for unknown samples in a proliferation assay or compound screen. The 20,000 cell data at one hour suggest a plateauing of the curve, indicating a shorter incubation time would be recommended for these cell numbers.

The simplicity of the XTT assay, with a single reagent addition, lends itself to high throughput applications.
As a 96-well plate can be processed and read in less than 10 minutes on the Biomek NXP Workstation, the main impediment to increasing throughput is the manual transfer to and from the incubator. By utilizing an integrated incubator and scheduling software, this assay can easily process numerous plates while maintaining tight controls on incubation timing. The automation of this complete process also frees up resources from these time-consuming and tedious responsibilities.

This work provides a demonstration of the utility of the Biomek NXP Workstation to automate XTT cell viability assays through integration of an EMax® Plus Microplate Reader. The automated system was able to automate all steps of the workflow – from cell dilution and plating to reagent addition and analysis. Low CVs and high standard curve linearity highlight the consistency of these steps and integration of an incubator would further free scientists from the bench by providing a complete walkaway solution for the entire workflow.