In all living things, ribonucleic acid (RNA) is the carrier of genetic information it receives from its biomolecular cousin, deoxyribonucleic acid (DNA). RNA, however, is the molecule that puts this information into practice. In concert with cellular ribosomes and amino acids, RNA translates the genetic code it receives from DNA and, through a process called translation, synthesizes the enormous gamut of proteins an organism needs to live. 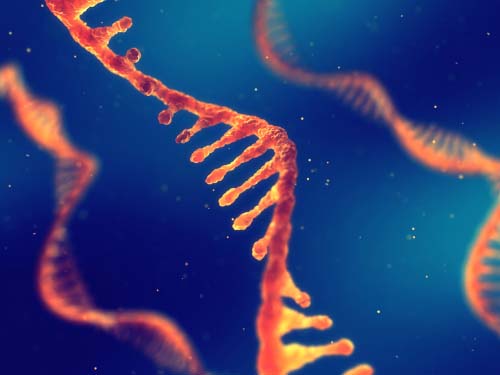 Each single-stranded RNA molecule (as opposed to the two-stranded DNA double-helix) is a chainlike structure made from a sequence of nucleotides, each consisting of a nitrogenous base unit, a pentose sugar and a phosphate group that bridges one nucleotide to another. RNA uses four nucleobases arranged in a sequence that carries genetic information:

RNA comes in many forms with varying functions, but three major types instrumental to protein synthesis in all organisms have been most thoroughly studied:

Numerous other less commonly researched RNA types have been identified and characterized, including micro RNA (miRNA): tiny nucleic acid chains that act as gene regulators in most eukaryotic organisms. Micro RNAs can bind to mRNA fragments with complementary base sequences, preventing the translation and synthesis of specific proteins.

Micro RNA can affect disease-related genes in the way described, either promoting or inhibiting the emergence and growth of certain tumors. Other disease states linked to dysfunction of miRNA or other RNA types include:

Current approved and experimental "RNA therapy" approaches include using miRNA to degrade dysfunctional proteins (applied to hemophilia treatment), as well as mRNA replacement (cystic fibrosis). As more and stronger links between RNA and disease states are discovered, research continues into existing and potential paths toward prevention and treatment.