To measure TOC, first remove TIC. Then convert organic species into CO2 gas, measure the gas on detector, and convert the result into a TOC value. 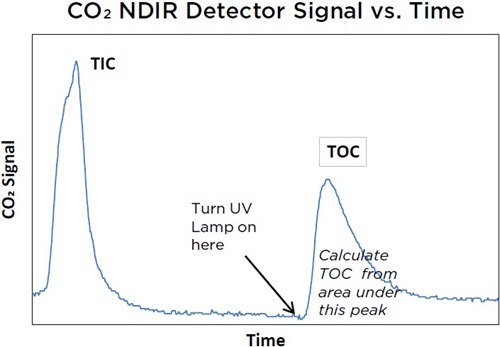 Note that the area under the curve for TOC can also be referred to as ‘NPOC’ (Non-Purge able Organic Carbon). If the initial water sample contained a volatile organic, the volatile organic would likely be purged during the step to remove TIC. Thus, what remains after TIC removal is non-purge able organic carbon. Because the QbD1200 is designed for clean water applications where high concentrations of volatiles are not present, this should not be a concern.

The general TOC analysis method described here has been widely used for many years in a variety of applications and conforms with numerous regulatory guidelines such as USP, EP, JP, and is also an approved method (5310c) under the US EPA guidelines. The QbD1200 is unique in that it combines all required reagents (acid, oxidizer, and dilution water) into a single reagent instead of requiring multiple reagents.